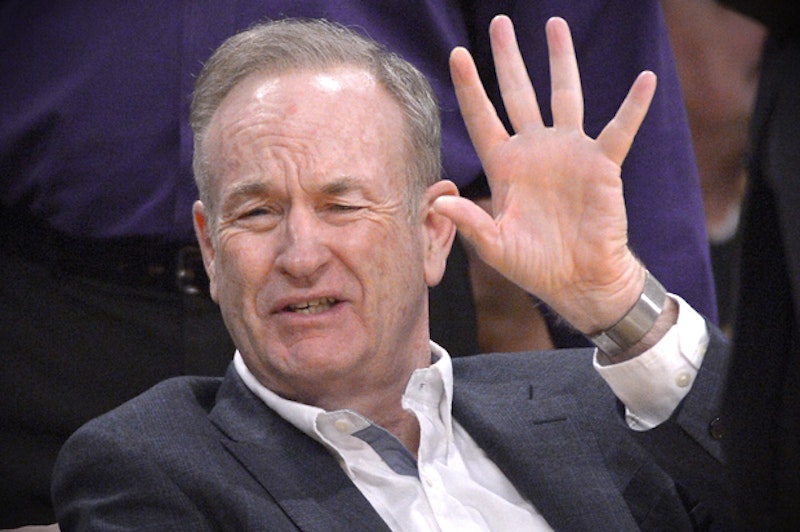 Bill O’Reilly makes for incandescent television. “An extraordinary broadcaster,” Fox called him when reporting his departure. He certainly is, or was. The man-mountain blazes with certainty and indignation. He commands a bugle voice and a feather-light touch for inflection. He thinks quickly and understands how to punch home a point with words. A Fox News defector reported that the big man composed all the copy for each broadcast of The O’Reilly Factor, rapping it out over his phone on the day’s limo ride to the studio. Rupert Murdoch, having fired his star, was still enthusiastic about O’Reilly. “In fact, his success by any measure is indisputable,” Murdoch wrote in a letter to staff. But no, not really. Because O’Reilly was, or is, full of it.

Al Franken took the fellow’s measure long ago, in Lies and the Lying Liars Who Tell Them. Since then O’Reilly has demonstrated that he can lie without even knowing that he’s lying. He can look at film footage that proves he’s a liar, then play the footage on the air because he thinks it shows he’s right. (I refer to the infamous Argentina affair of 2015.) The fans don’t mind; his ratings have been the best in cable news for a long while. Most newscasters, lofty as they are, betray their egotism rather than parade it. O’Reilly practiced a different craft. He didn’t question in order to bring out information. He did it to establish the relationship between himself and the person being questioned, and that relationship was like a seesaw stuck with O’Reilly high and the other low. Often enough the lid came off his head and he erupted. But not always. One remembers the smiling indulgence with which he tolerated the atheist Richard Dawkins. But either way, the world passed in judgment before him. “I’m throwing in with Jesus,” he told Dawkins. Belief is one thing, but he wasn’t going to reverence a mere man-god.

O’Reilly went on TV so viewers could taste what it’s like to be king of the hill, or of the universe. That doesn’t mean news was a mere prop. His program’s demographic was aging white guys, a group known for wondering why it doesn’t get to be center of the world anymore. The news provides many opportunities for them—or the ones so inclined—to rub that sore. O’Reilly scratched it, lacerated it, and provided a balm by showing there was one last white man who had the universe shining his shoes.

This desire is stupid. It’s the kind of stupidity that grows out of faulty character rather than a lack of brain cells. But it can grow strong, and in O’Reilly’s case it flourished. Just before the Murdochs showed him the door, another claim of sexual harassment had come to light. I don’t suppose it made a difference, but it does highlight his mental world. A woman at the office allegedly caught his eye. “He would never talk to her, not even hello, except to grunt at her like a wild boar,” her lawyer says. “He would leer at her. He would always do this when no one else was around, and she was scared.” Here’s the kicker: she’s black, and his name for her was “Hot Chocolate.” That’s what he would say in between the grunts. Filter out the racism and sexism—all right, it can’t be done, but suppose—and you’re still left with enough vulgarity and stupidity to make a normal person choke. That’s what Bill O’Reilly brought to the air.