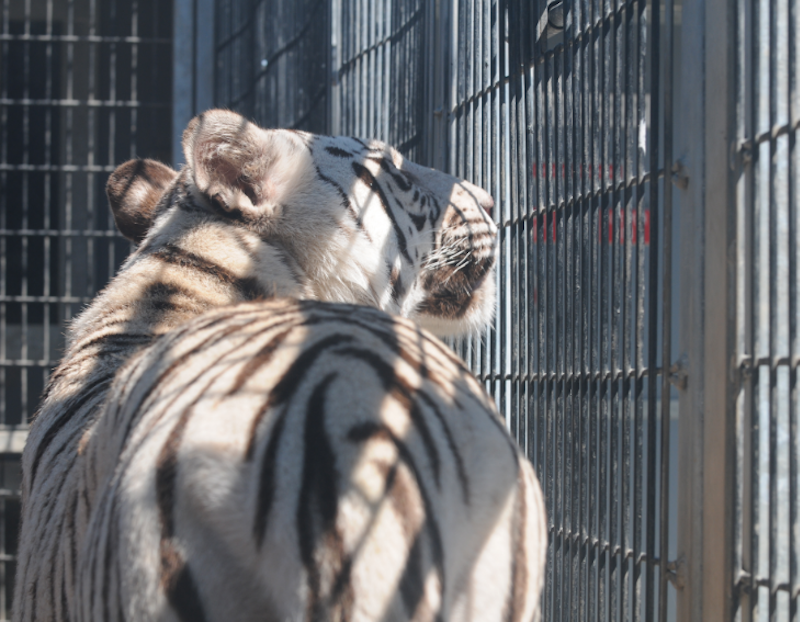 In the wake of Ringling Bros. and Barnum & Bailey Circus’ closure announcement, two congressmen recently introduced a bill—with the unwieldy title of the Traveling Exotic Animal and Public Safety Protection Act, or TEAPSA—which seeks to end the use of wild animals in circuses. This would be a major step forward for the animal-welfare movement in the United States. Christina Scaringe, general counsel to Animal Defenders International, spoke to me about the legislation and its chances of passing.

SPLICE TODAY: What is TEAPSPA? And why is it important?

CHRISTINA SCARINGE: TEAPSPA was reintroduced to the 115th Congress last week under bipartisan sponsorship, thanks to Representatives Ryan Costello (R-PA) and Raul Grijalva (D-AZ). TEAPSPA is narrowly drafted to address the known and inherent dangers and cruelty of traveling wild animal acts; it will also streamline current regulation, which is costly, problematic, and unworkable.

Traveling circus shows cause suffering to the animals and are a threat to public safety. Given the circumstances of constant travel, and the need for animal accommodations to be small, lightweight and transportable, circuses cannot provide animals with the space and environment they need to maintain good health and welfare. After decades of producing detailed reports on circus animal suffering, ADI’s findings are supported by a recent scientific study, which concluded that circus life for animals is one that is not “worth living.”

Oversight is also complicated by the limited number of inspectors and exhibitors’ frequent mobility. [The Animal Plant and Health Inspection Services’ Office of the Inspector General] reports note numerous inspector deficiencies, including limited to no follow-up, noncompliance citations and failure to consult animal experts to determine if enclosures or barriers are sufficient to protect the public. Moreover, USDA’s licensure renewal process does not evaluate or require compliance. USDA renews a license, even if it recently cited that exhibitor in violation of federal law or regulations. OIG has repeatedly criticized agency oversight here, citing vague standards that are consistently challenged in the field and in the courtroom, and overworked, underperforming agencies, which frustrate inspectors and regulated entities, and leave animals and humans unprotected. Ultimately, when things go awry, it’s the local police who will discover they’ve been left to deal with the fallout. Now, USDA has removed inspection and animal welfare reports from its website, further shielding exhibitors from review. To ban wild animals in circuses altogether is cleaner, less costly, and more easily enforced than the current oversight.

ST: My understanding is the bill has been put forward before. Tell me about its history. And is there any reason to believe it has a better chance of passing this time around?

CS: The forerunner of the current bill was introduced in 2011 and 2014 and as with many bills on this type of issue, we develop the language of the bill in response to feedback from legislators. It’s not unusual for such bills to develop over time before they are passed. TEAPSPA was also introduced late in the 114th Congress, in its present form and with its current bipartisan prime sponsorship. Since 2011, public concern regarding this industry has grown, and is reflected in the continuing decline in attendance at such shows, while the US market for human-performance circuses is expanding. Thirty-four nations have banned such acts, and 71 US jurisdictions have instituted some form of ban or restriction on wild animal acts.

ST: Is there a particular ideological or geographic profile of the types of legislators who oppose this bill? Why do they vote against it?

CS: Changing the status quo can, at times, face inertia; however TEAPSPA is enjoying bipartisan support, as it addresses both animal welfare and public safety issues. The evidence of animal suffering in circuses and related escapes and incidents causing or threatening injury to animals and humans continues to grow, and demonstrates that federal action is needed.

Banning the use of wild animals does not have to mean the end of the circus; in fact modernizing the circus to human-only performances has been shown to encourage development of more shows and hence, more jobs. There are more than 20 human-performance circuses in the US, including some who were once animal exhibitors. The growth area in circus performances is human-only shows, which are popular with the public.

ST: What can people do to support the bill?

CS: What’s most important now is for people to contact their legislators to let them know that they want circus suffering to end, that they support TEAPSPA, and ask for their support as well. Constituents have the power to move the bill forward, but they must use their voices to speak for animals that cannot.