Why endangered Republicans are running away from Trump. 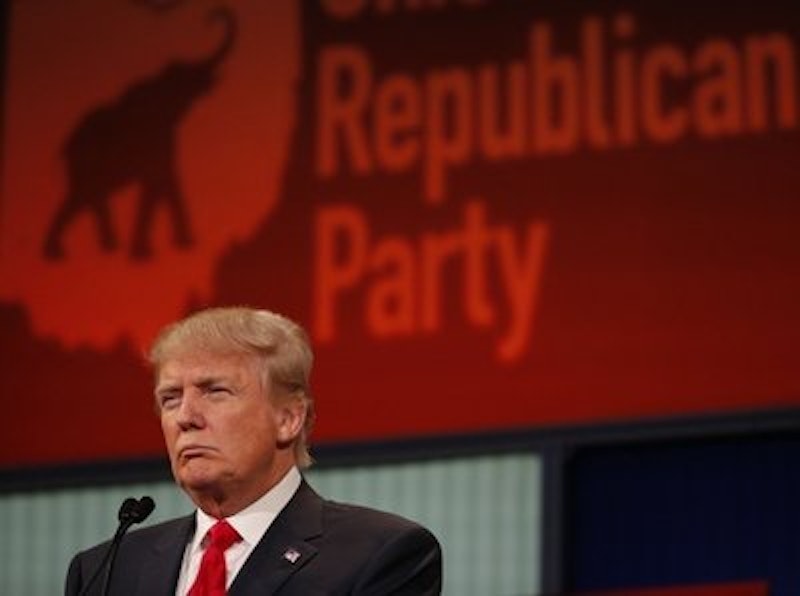 Back when Lyndon Johnson ruled America like a benevolent dictator, he used presidential powers and privileges to reward and punish and bend reluctant legislators to his imperial wishes. He established the nation’s space center at Houston as a favor to his home state and its Congressional delegation. He passed the Civil Rights Act with the help of Republican Congressional leaders Everett Dirksen and Charles Halleck at God knows what cost to the treasury. He enacted Medicare by raising peanut import quotas to attract the support of hostile Southern legislators by protecting an important regional agricultural industry against cheap foreign imports. And he chided a critical liberal senator who was cozy with the press that the next time he needed a dam in his home state he should call a certain syndicated columnist instead of the White House.

And in one of his most colorful quotes, Johnson remarked of FBI Director J. Edgar Hoover, who used wiretaps, surveillance and accumulated rumors and gossip to keep files on elected officials and other public figures, that “I’d rather have him inside the tent pissing out, than outside the tent pissing in.” It was Johnson’s flamboyant way of ruminating on why he kept Hoover happy and as head of the nation’s premier crimefighting agency.

It’s now an established predicate that the end of the time-honored filibuster on executive nominations will force Senators of both parties into hands-across-the-aisle cooperation rather than extend the demise of the windy oratorical device—which was established to force cooperation—to other or all issues before the Senate, creating a permanent partisan checkmate. That’s doing it the hard way.

It used to be said that a good politician is one who stays bought. In the White House and on Capitol Hill, and in states houses across the nation, pork used to be power. Pork and patronage, along with political bosses, are what made the complex system of governance tick. And no one since FDR, Johnson’s hero, was a better high-performing master of the system and all of its levers of power than Johnson. Say what you will about the bossed-and-bought politics of yesterday, it certainly beats the ideological stand-offs that choke government today and the limp leadership that can’t even gather enough votes to pass its own legislation.

This is no exercise in political taxidermy but a look at how things got done when the system worked to everyone’s benefit. That is, until some scalawag came along and decided to take away the tools of the trade that greased the way for the otherwise creaky and vendible system to give lawmakers tangible rewards that they could take home and crow about. They were called earmarks, and pork—bridges, roads, dams, buildings, airports, post offices, parklands, jobs, military installations, contracts, leases, agencies, public transit, and whatever else a community or congressional district might need that could, at the same time, boost the standing of its sponsoring lawmaker. And in the political lexicon, one man’s pork was another’s essential program. So, the question is: Are we better off now than when pork and patronage oiled the system and political bosses made certain elected officials did their jobs or face retribution at the polls. And the answer depends upon whether you prefer results or transparency and paralytic government.

The sprawling Social Security Administration complex at Woodlawn, outside of Baltimore, didn’t wind up in Maryland because of climate or geography. You can bet it was a reward or payback for some deed or trade-off. And the NSA buildings at BWI-Thurgood Marshall Airport weren’t exactly a free market enterprise. Nor did the 16 other federal installations spread across Maryland land here without the bargaining skills of holdout lawmakers itching for visible baubles and campaign bragging rights for their home state.

The elimination of earmarks, a technically nuanced difference from pork—earmarks are specific contracts, pork is discretionary spending—was gradual over a decade until they were finally banned, as an embarrassment, by then-House Speaker John Boehner (R-OH). Boehner said at the time that banning earmarks was a “critical step to restore public trust.” And in the process, Boehner destroyed his own speakership and was forced to resign because he could no longer deliver the pork chop.

The result of the ban is a non-performing Congress. So, it’s a toothsome twist that Boehner’s successor as speaker, the ideological policy wonk Rep. Paul Ryan (R-WI), has thought, aloud, about restoring the euphemistically camouflaged form of patronage—a legalized and highly productive method of bribing a lawmaker for his vote—illegal in the marketplace but perfectly acceptable in Congress. Without earmarks, Ryan has learned that he can get nothing done.

In state houses, at least in Maryland’s, the guidebook to which legislators have been naughty and nice is the annual capital budget. In it are found the pork projects a governor is dispensing either as current reward, or down payment on future votes, to friendly legislators. There are listed such items as local duck decoy museums, local theaters and galleries, arts group projects and, of late, the social—but with a cautionary non-religious wink—needs of black churches across Maryland. They include social halls, outreach facilities, shelters, and recreational facilities, projects that cannot be identified as having religious significance (kind of like the rubberized playgrounds the state of Missouri pays for that have caught the Supreme Court’s attention.)

Add to the missing link of greasing the system the mighty pterodactyl political machines—the Daly machine of Chicago, the Greene machine of Philadelphia, the Lawrence machine of Pittsburgh, the Pollack, and later the Kovens machines of Maryland, the Byrd machine of Virginia, the earlier Brown (father of the current governor, Jerry Brown), machine of California, and all of the other urban political organizations of another era, and they could summon up enough votes on Capitol Hill to deliver a president’s legislative package bedecked with ribbons and votes to spare. (You can bet that when Johnson, or any other president, needed votes he didn’t call the Senate chaplain.) The members of Congress usually owed their jobs to the political bosses back home.

To be historically correct, the gradual fade-out of political organizations actually began with the New Deal and FDR. To ease the pain of the Great Depression, government began adopting social welfare programs that assumed the functions of the political machines and precinct organizations—food baskets at holidays, help with heating costs, legal assistance, patronage jobs. And continuing into the revolutionary 1960s, government began subsidizing activist community and neighborhood organizations that, more often than not, challenged and defeated machine-sponsored incumbents and candidates. Government, in a sense, bit the hands that fed it.

It’s also arguable that money and social media have contributed to the breakdown of government, and don’t forget gerrymandered redistricting. Demography was the final kiss-off in recent years. Minority populations clustered in a handful of coastal states, allowing the rest of the nation to become ruby-red. Lawmakers spend an inordinate amount of time raising money, and they become more beholden to their donors than their constituents. As to redistricting, there’s no seat like a safe seat except when there’s the threat of a primary for defying special interest groups or party leadership, weak as it is. Transparency and the fear of exposure have also made legislators at all levels victims of what they wished for.

As Congress returns from its Easter vacation, with Republicans barely skimming by three recent special elections in seemingly safe red districts, a new partisan fear is emerging and that’s the terror of the Trump connection, with polls reflecting growing dissatisfaction with the President almost daily. The Republican majority is facing deadlines on a government shutdown and an imaginary showdown on nuclear conflagration that exists mainly in Trump’s febrile mind. Trump is also pressing for another attempt at re-framing health care in America, as much to claim a boast-worthy legislative victory before his first 100 days expire as to clear a pathway for the heavy lift of tax reform.

For Republican officeholders, as well as Democrats, the first law of politics is survival. And for endangered Republicans, running away from Trump—his $3 million weekends at Mar-A-Lago, his shadowy business alignments and his stubborn refusal to release his tax returns—appears to be the surest way to stay politically alive in an era without pork payoffs for the folks back home.