The Man Who Broke the Senate

Was it McConnell or Reid? Don’t ask Politico. 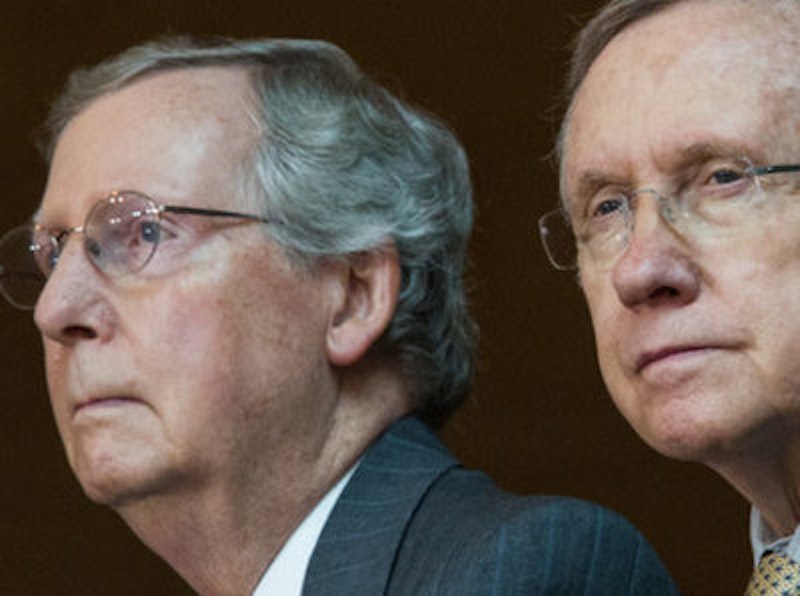 Harry Reid and Mitch McConnell have been in the Senate for decades. “They were party whips together, then leaders together since 2007,” Politico tells us. Reid bosses the Senate Democrats, McConnell bosses the Republicans. Their staffs get along, Reid says, but he and McConnell “don’t get together much.” By contrast, McConnell says he and his counterpart “spend a lot of time together.” I guess people don’t get hung up on McConnell’s truth claims, because Politico breezes past the statement. The two men indulge in “incessant sparring,” the article tells us, and asserts that people who know them well say the relationship, which “has always been rocky,” has now reached “a new low of bitterness and distrust.”

I'll admit that I don’t believe McConnell either. It’s just that I doubt Politico’s competence. The result is that I’m tantalized. How? Well, consider the following. The article does a to-be-sure about this year’s legislative accomplishments, and then says, “But it’s clear through interviews with associates, senators and the leaders themselves they may never be able to let go of their argument, which has lasted for years, over which of them broke the Senate.” Now there’s a story. Naturally Politico couldn’t get it into the lead, which is about the two senators’ latest sit-down. But six paragraphs in we find a central claim that’s both piquant and central to our nation’s political predicament. The system is doing so badly that the two men who best know the Senate, the two men who have spent their careers working in that chamber and guiding it, hate each other because each one is convinced the other has broken it.

Boy, does that seem true to me. It makes so much sense. But Politico lets the claim lie there. The article is about the various bumps in the Reid-McConnell relationship. As presented here, and despite the provocative sixth paragraph, these incidents don’t add up to hatred over a broken Senate. Instead Reid appears to be angry for two key reasons. First, back when Democrats ran the Senate, McConnell did a bang-up job of obstruction and made Reid’s life a misery. Second, now that Republicans have the Senate, McConnell is crowing about all the bills his team has passed, which he is able to do because Reid and the Democrats are being more cooperative than McConnell was. Not very cooperative, but more cooperative, and the difference has made it possible to get some governing done.

Politico’s article doesn’t make the case I just outlined. As mentioned, it gestures at an idea with more heft, that of the ruptured Senate. But items supporting my argument can be found lying about the article, minus items supporting the busted Senate argument. “How many filibusters has he had to overcome? I had hundreds of them,” Reid says. “The reason he’s done well is we’ve helped him.” Is the guy wrong? Well, a bit further on Politico mentions “McConnell’s constant use of delaying tactics” and does so in a glancing, matter-of-fact way, as if this constant use were a given. Not only that, but the mention is to explain Reid’s curtailing of the filibuster for presidential appointments. That curtailing was the stormiest procedural move of Reid’s time as leader of the Senate. Politico appears to take for granted that Reid’s side of the controversy is correct.

Even so, the article can’t square up to the job of counting filibusters and establishing that Reid has a point. It uses Reid’s claim simply as evidence that the two gents do keep on bickering. “The incessant sparring over who ran the Senate better, how many filibusters were mounted, who got more amendment votes and which leader has been more cooperative is exhausting to many senators,” Politico says before introducing a quote from weary Jon Tester, Democrat of Montana, who says he doesn’t listen to either leader’s remarks. Maybe I wouldn’t either. Even so, Reid doesn’t appear to be wrong. The article calls the Senate “a gridlocked legislative wasteland” but notes that “McConnell has been giving numerous national interviews focused almost solely on McConnell’s productive first year.” Huh. Sounds like the Senate was broken and now it isn’t. When McConnell and the Republicans were in the minority, the Senate was broken because McConnell and the Republicans wanted to obstruct. Now they’re in the driver’s seat and allow the Senate to move forward.

In short, McConnell and the Republicans have been spoilers, unlike Reid and the Democrats. But the article won’t say that. This isn’t out of hostility to Reid; as noted, the article agrees that McConnell was obstructionist, and it gives Reid’s version of a double-cross allegedly attempted by McConnell with the new spending bill. Politico can acknowledge individual facts that favor a given side. But when it comes to connecting the dots, the publication becomes flighty. It rolls its eyes about that silly pair of men and their never-ending spat, and it gives no thought to how facts mentioned in the article might explain the leaders’ bad feeling. Everything turns personal and nothing makes sense. If this syndrome sounds familiar, it’s because American political reporting is more broken than the Senate and seems likely to stay that way.