How fascist are we really? 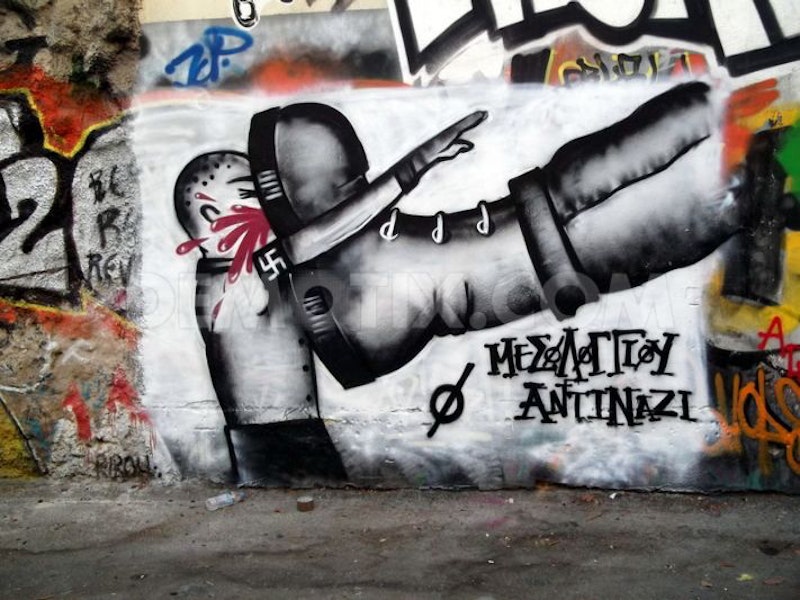 Today, the first day of 2016, the copyright on Hitler’s book Mein Kampf, long held (and unused) by the state of Bavaria, has expired and so new editions are on the way. Reason to fear?

I doubt it, despite a slight uptick in far-right activity throughout the West—and censorship is never the best answer, though I am probably ever so slightly more sympathetic than most libertarians to the argument that in the immediate aftermath of a war or the collapse of a totalitarian regime, publishing its propaganda may constitute collaboration in its violent crimes. World War II was 70 years ago, though, and Continental Europe ought to adopt a legal regime more like our free-wheeling First Amendment.

Let idiots reveal themselves at will and be met with counter-arguments instead of stewing in the underground and using code words that make them think they’re sophisticates in on a big secret.

Besides, one triumphalist march that is truly unstoppable is that of irony, which is now so pervasive you’d be hard-pressed to tell the real fascists from the young pranksters with a sick fondness for joking about fascism, a formula for endless, ambiguous legal battles if you set out to censor them. (Are we worried that when the band Joy Division became New Order, they went from one Nazi-inspired name to another? We might be if we were unhip censors in post-War Germany, and is there ever really a hip censor?)

I take this calm position even while suspecting there is a new, relatively mild anti-Semitic current on the Internet, complete with meme pictures about conspiratorial Jews and oddly frequent and ironic use of the word “goyim.” We’ll survive it.

I’d imagine that somewhere out there are political activists suddenly made more sympathetic to anti-fascist censorship by the rise of demagogic Donald Trump. Pat Buchanan is fond of him—and of the late fascist Spanish dictator Franco. But in a world already filled with big government, onerous regulations, and war, I can’t help feeling that it’s selective enforcement to single out Trump for the charge of fascism. If he smacks of it, it may just be because, as paleocon writer (and efficient trains enthusiast) William Lind once argued, the West is so hellbent on political and cultural suicide, any assertion of nationalist pride looks suspect and dangerous. William F. Buckley got called a crypto-fascist too, after all.

If you really want to avoid the occasional demagogue like Trump—and I do—you’d be better off tamping down the leftist/hypersensitive tendencies in the culture to which he has become the inarticulate response. The masses will occasionally want a Trump-style backlash as long as we live in a world in which the elite do things like, say, fire the student online media editor of Columbia University’s arts journal for joking, in response to a leftist student demanding to know why two of the journal’s contest judges are white males, that “they were born that way.”

I’m not suggesting a dismissive joke in response to every warning about fascism. On the contrary, I worry fascism is the default political impulse of the human race and that we have gone a long way toward making what Robert Higgs called “participatory fascism”—superficially democratic big government—the new norm throughout the “free” world. And I don’t have much patience for people who think they’re policing rational discourse by forbidding all Nazi analogies. They’ll wish they had recourse to them when the truncheon falls, as will I.

But ultimately, even if we argue about which things are fascistic when, there is a widespread agreement that fascism is a sort of worst-case scenario to be avoided, and that’s good. The trickier question is what its opposite looks like, especially in the minds of people unfamiliar with liberty and small, limited government.

If you wrestle with monsters (without a very clear set of principles), you tend to become a monster—and it’s interesting how for all the railing against fascistic central governments and globalist elites some on the fringey right do, they end up being the ones with camo and ammo and dreams of combat. Meanwhile, elites of all stripes dream of total power rather than the devolution and diminution of powers. It’s less like everyone’s avoiding fascism than like they’re bickering over what kind of fascism to institute, and whether to do it at the local or international level.

(Will future historians argue that rather than WWII ending fascism, there was just a post-war split between localist neo-fascists keen to avoid the “New World Order” and elite, cosmopolitan, closet fascists who were keen to control that Order? Who’s crazier? Then again, if the elite and the populists are all de facto Nazis, you’d think they’d get along better.)

Regardless of how much we should worry about modern fascism, any seeming-complacency on my part is not caused by there being anything good about Nazis, just in case that seemingly obvious point needs restating. It can’t hurt to repeat, really, given some of the alternatives to inculcating that message. (I’d also be content not to see the First Order on the big screen again, if the makers of the next Star Wars episode were tempted to ditch the half-assed politics in the background and just focus on the central Force-wielders.)

If nothing else, remember that the fascists, from Mussolini on down, wanted a strong central state and the suppression of selfish bourgeois individualism. Keep your distance from anyone who talks like that, whether on left or right, and you’ll be doing okay.