Steve King Is a Cuck

The congressman from Iowa is promoting miscegenation aimed at a single skin tone. 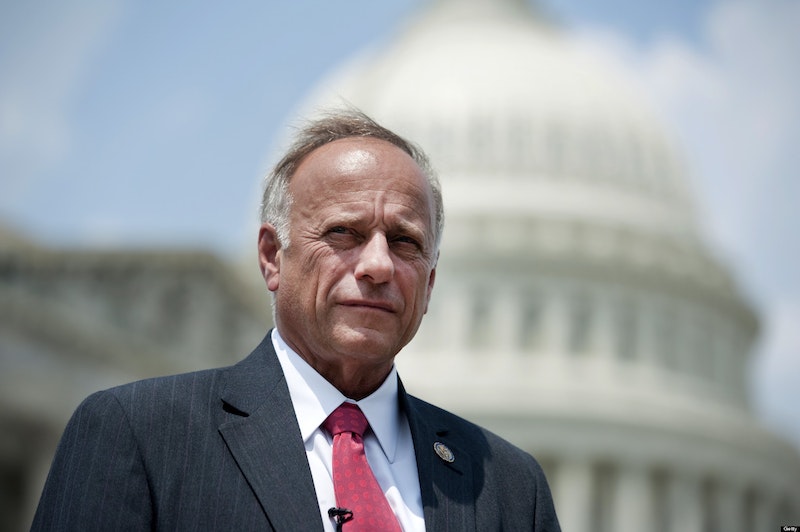 Rep. Steve King (R-IA) can always be relied on for a good incendiary quote. Many remember him from his 2015 comment that the Supreme Court's decision to legalize gay marriage meant that "you can marry my lawnmower." The congressman from Iowa’s 4th district tends to make public comments that make him look buffoonish, even racist. He's at it again with his recent tweet in support of Dutch anti-Muslim politician Geert Wilders: “Wilders understands that culture and demographics are our destiny. We can't restore our civilization with somebody else's babies.”

The ensuing firestorm mostly involved people calling King a racist, white supremacist, and bigot. CNN’s Anna Navarro called him an “embarrassment to the human race.” The white nationalists, however, lionized him. Finally an elected official had come out and said what's said all the time in private. This time, King’s not walking back his statement. He told Fox News’ Tucker Carlson that he meant exactly what he said. "All of Western civilization has gone down below the replacement rate...with the exception of Israel," King told Carlson explaining that the “vacuum” that's created will "be filled by people who don't believe in our values here in Western civilization.

King, as part of the damage control, told CNN’s Chris Cuomo, “If you take a picture of what America looks like, you can do it in a football stadium or a basketball court and you see all different kinds of Americans there. We're pretty proud of that, the different looking Americans that are still Americans.” Now that sure doesn't sound like something a racist says. The CNN host also told King that he keeps “making the point that this country needs to be about white people raising their birth rate,” which is right out of Cuomo’s imagination because King's never said that. Cuomo also suggested that King was referring to non-white babies, which the tweet didn't suggest. The congressman told him he'd like to see so much intermarriage that we all eventually look alike. Oh, what a racist!

Conor Friedersdorf, responding in The Atlantic, wrote that the Iowa arch-conservative “seemed to imply that someone like Tiger Woods, born to parents of African and Asian descent, or comedian Aziz Ansari, the child of Muslims born in India, are less authentic members of our culture than babies born to parents of European ancestry who alone can ‘restore’ Western civilization.” That could be a logical inference from the tweet alone, but not after King’s CNN appearance. Friedersdorf's seen that appearance too, as his article indicates.

Steve King told Tucker Carlson that If he'd had more than 140 characters, he'd have stated, “We can't rebuild our civilization with somebody else's babies unless we adopt them.” If that's the case, he should have found a way to make that point on Twitter, because that's a major shift in tone. It removes the racial component so widely inferred. What he unsuccessfully tried say with his tweet is that combining multiculturalism with serious levels of immigration is a recipe for disaster, which it is. Even Angela Merkel has said it leads to “parallel societies.” She called it a “sham.”

The reason multiculturalism is a bogus concept is that it's promoted by immigrants who have no interest in assimilating into a new culture. Liberals who believe in cultural relativism are happy to be their useful idiots in furthering their cause. All cultures are equal to them. That includes Afghanistan, where bacha bāzī (“boy play”), a custom of adults sexually abusing boys, is part of the culture. Or Indonesia, where female genital mutilation is commonplace. Cultural relativists see criticizing other cultures for barbarism as arrogant.

Canada's naive Prime Minister, Justin Trudeau, told The New York Times, “There is no core identity, no mainstream in Canada.” He sees his nation as “the first post-national state,” but what he's really doing is presiding over a grand social experiment that has no precedent for success. As is often the case with liberals, he lacks both pride and confidence in his own national culture because it doesn't meet his expectations of perfection. To him, it's flawed, so it's no better than Saudi Arabian culture. He's setting Canada up for their own Donald Trump.

It's already almost impossible to communicate between all the tribes here in post-truth America. Words are rapidly losing their meaning as each group creates its own reality in their minds. The last thing we need is a Justin Trudeau-style de-emphasizing of assimilation for immigrants to fracture our society even more. Steve King is often woeful, but at least he's not ashamed of his country, like so many on the left are. The babies he's talking about aren't black or brown or yellow. They're babies that grow up in Merkel's parallel society. He doesn't want to see huge street demonstrations in favor of a foreign leader like the Netherlands is experiencing. He doesn't want Islamists marching in American streets. His opponents want to define him with one poorly-constructed tweet, but someone has to do the dirty work of fighting the plague of multiculturalism. At least he's not afraid to speak his mind in the current PC culture eager to demonize people for saying innocuous things.

Those on the alt-right are confused in making Steve King their hero. Their favorite dig, “cuck”—without which they can barely form a sentence—refers to miscegenation, which is an abomination to them. Steve King is a proponent of miscegenation. He's on the record. His recent tweet doesn't make him a racist, but his explanatory comments revealed something new about the Iowan. I have some bad news for the alt-right. Their new savior, Steve King, is a cuck.