Once Obama’s out of the way, a real liberal can take over. 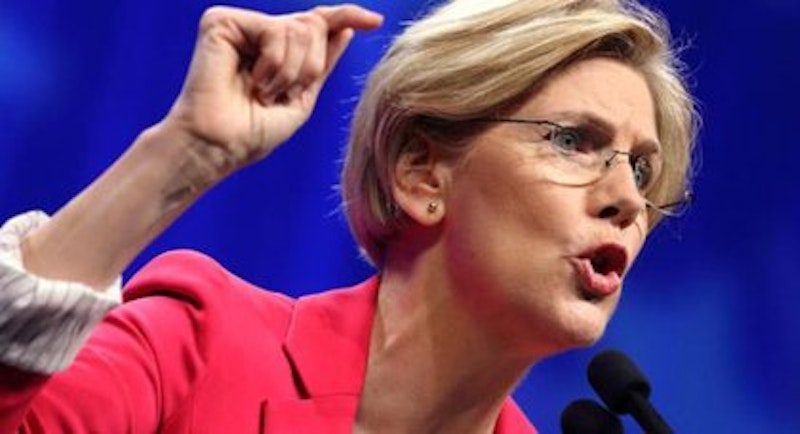 Left-wing Democrats have the ability, especially at election time, to express the sort of giddiness that confounds not only Republicans but centrist members of their own Party as well. Looking at today’s political climate at face value—with Barack Obama’s sub-par approval numbers, unions taking a licking and red-state Democrats running away from Obamacare—it would appear that the November midterm elections will result in continued Republican control of the House, with an outside shot of taking the Senate as well. (I say “outside shot” since the GOP has blown opportunities in 2010 and 2012 to pick up seats because of disastrous candidate recruitment.)

Yet along comes Michael Tomasky, writing in the current New York Review of Books (paywall), promoting the idea that a “new populism” just might be bubbling within the ranks of his Party. I find the basis of his theory faulty, as it’s predicated on the rise of Sen. Elizabeth Warren as the spokeswoman of everything that’s just and progressive. Her very saintly presence, Tomasky intimates, may be enough to ignite the faithful.

He writes: “Warren possesses a knack for earthy articulation of the liberal-populist worldview matched by no one else in American public life today.” He adds that MSNBC, the partisan opposite of Fox, is contributing too, as hosts like Rachel Maddow and Chris Hayes connect with the Democratic Beltway crowd. And Tomasky is encouraged that liberal media outlets like The Washington Post, The Nation, The New Republic, Daily Beast (where he writes DNC press releases) and The Washington Monthly are all on-board with the hope that Democrats are shedding the shackles of Bill Clinton’s “Third Way” policies. Why he left out The New York Times, Talking Points Memo and The Daily Kos is left unexplained. And let’s not forget the supposed symbolic presidential campaign of “moderate socialist” Sen. Bernie Sanders, who’s “evidently” preparing a run not to win, but move Hillary Clinton to the left.

Tomasky concedes that Clinton, if she runs and is the Democratic nominee in 2016, would need to get some populist religion, given her ties to Big Money and inclination to play it safe politically. Yet he remembers that in her failed attempt at the ’08 nomination Hillary, when it was clear Obama was whipping her, switched disguises and was seen “downing a shot of Crown Royal at a working-class bar in Indiana.” The unspoken hope among lefties is that Clinton, run ragged for decades—accomplishing what, I’m not sure—will pass and that’ll free up Warren to run on a platform raging about income inequality, a higher minimum wage and an expansion of entitlements. Then there’s Maryland’s term-limited Gov. Martin O’Malley, an ambitious, out-for-himself chameleon who’d gladly don the populist white hat if required. And who knows, maybe first-term NYC Mayor Bill de Blasio, another left-wing teddy bear, will dodge any scrapes in the city and come to the rescue.

This is all rather confusing. Where does Tomasky think all the foot soldiers for The Cause are going to come from, aside from liberal media outlets? A neutral observer (which I’m not) will, after shaking the cobwebs, recall the short-lived Occupy Wall Street movement from a few years ago that was, if you believed the rhapsodic press accounts, the new force that would bring Wall Street, the Tea Party, the “1 percent,” mega-banks, Rupert Murdoch, the Koch brothers, insurance companies and corporations like Walmart to their knees. (It goes without saying that Hollywood millionaires and Silicon Valley tech billionaires are exempt from scorn.) It didn’t happen, of course, as the rudderless throngs that gathered at Zuccotti Park and countless other urban locations either got bored or frustrated with their protests. OWS, which for several months really did look like a potential political player—far more significant than blue-state scold Elizabeth Warren—squandered its potency and, at least right now, is a footnote.

In fact, if there were a significant populist wave that captures the imagination of Americans, I’d say it’s likely to come from the Republican Party, with the likes of Sen. Rand Paul (sculpting a more “electable” image every day), Govs. Scott Walker and John Kasich and maybe Sen. Marco Rubio. The Other Side. It’s messy: the GOP would need to dispatch the polarizing and narcissistic Sen. Ted Cruz, insufferable moralists Rick Santorum and Mike Huckabee, forget the names Mitt Romney and Chris Christie and dispel any idea that Jeb Bush might be the palooka to combat Mrs. Clinton. (I like Bush, but the toxicity of his last name has nullified him as a viable candidate, and I suspect he’ll withdraw his name shortly, and instead resign himself to playing kingmaker for his 37-year-old son George P. Bush, who’s running for Land Commissioner in Texas. A nightmare scenario for both Republicans and Democrats is an eventual G.P. Bush vs. Chelsea Clinton presidential election sooner rather than later.)

It’s all guesswork at this point for both Democrats and Republicans, and will remain so until after the midterms. So Tomasky’s Warren fantasy (he’s jazzed that her videos of her speeches and “decimat[ing] slow-witted cable hosts” go “viral,” which is an unreliable indicator of a “groundswell”) is both embryonic and harmless. But I’ll be a sport and give the guy an A for enthusiasm.