Kids Are Citizens Too 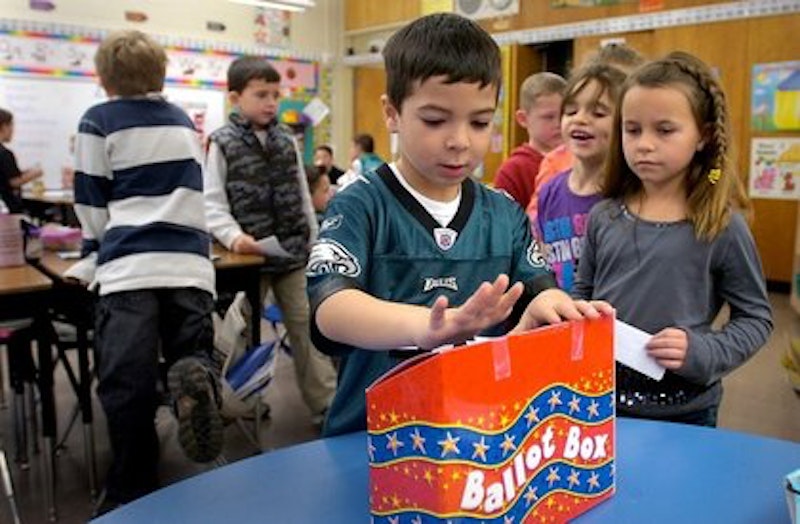 Amidst the back and forth about voter ID cards and potential voter restrictions in North Carolina and other states, there’s been little discussion of the largest group in our society that is still systematically disenfranchised. After long, hard-fought battles, women and African-Americans in the US can vote. But children still can't.

I'm sure lots of people will see this as a joke, in much the same way that women's right to vote was long taken as a joke. As women once were, children under 18 are seen as dependent, irresponsible, and too naïve or ignorant to make decisions about weighty political matters. It is assumed (as it was once assumed for women) that they will simply vote the way someone else tells them to, or will not take the task seriously.

"Let me put it this way: One of our candidates for Governor of Texas has, I recently learned, an internship program open to high school kids (I learned it because my youngest and one of her friends, both in 9th grade, applied for it). No one blinks if high school kids, or even younger people, get involved in campaigns. They can walk precincts, phone bank, stuff envelopes and all the rest of it. For that matter, they are free to donate money to campaigns, and they’re certainly free to attempt to convince voters to support the candidates of their choice. That’s pretty backwards. All of those activities are far more advanced than voting. Moreover, all those activities are more important to the outcomes of elections than casting a simple vote. So why is one thoroughly uncontested and uncontroversial, while the other is banned?"

As Bernstein points out, it's probably true that many 12-year-olds would vote for stupid reasons. But lots of adults vote for stupid reasons. Poll after poll shows that Americans know next to nothing about, for example, the deficit. One in six Americans think the President is Muslim. Probably some higher percentage than that thinks that (contra the First Amendment) it matters whether the President is a Muslim. American adults are broadly ignorant, prejudiced, and confused. They largely lack ability or the will to pay attention to politics in anything but the most cursory fashion, which is why issue positions have almost no effect on election results. There is just no credible reason to believe that my extremely intelligent 12-year-old-niece, is less likely to make good voting decisions than any number of 40-year-olds. The decision not to let her vote is based on broad generalizations about the class or group she belongs to—generalizations that are both fallacious and discriminatory.

Bernstein argues that extending the votes to kids would be a good civics lesson. If kids could vote, he says, they "would have an incentive to really start learning about the political system, since they wouldn’t be told that their views don’t count. They also might get in the habit of voting, a habit that might stick. "

I think those are good reasons to extend the vote. But there are others as well. Specifically, I believe it would benefit everyone—adults and certainly kids—if we stopped treating kids as if they don't matter.

In some sense, we do treat kids as if they matter. We obsess over whether films or video games are bad for kids; we gnash our teeth about test scores and global competitiveness. Kids are the focus of moral panic, anxiety, concern and empathy.  But they are always the objects of this attention; the question is always what adults should do for them, or to them. There is no sense that children might, or should, have social or political agency.

When kids do speak up, they tend to be ignored, marginalized, or disbelieved. Dylan Farrow's statement when she was seven that Woody Allen abused her, and her recent public restatement of the charges, have been dismissed by many essentially on the grounds that children are so incapable that their testimony is worthless—an assumption that makes prosecuting child abuse extremely difficult. Along the same lines, school-age students (and especially minority school age students) are often treated as if any sign of individuality or personhood is a threat. Meredith Simmons, in a recent article at the Atlantic, describes charter school policies in New Orleans where kids are forced to walk in silent single-file lines at all time, and are disciplined for minor infractions of dress or speech. Simmons argues that student protests against these policies are the result of New Orleans' "freewheeling" culture—as if anyone, from any culture, wants to have their lives determined by the petty diktats of power-drunk bureaucrats. Kids are controlled by discipline or they're controlled by their culture. Either way, they are not human beings with a human desire for, and right to, basic freedom and dignity.

It's true, as Bernstein suggests, that kids aren't likely to sway elections one way or another—they’re a large, diverse group, and they're not going to vote as a block. Still, I'd like those politicians in New Orleans to sweat just a little for their jobs when they see how unhappy students are with their schools policy. I'd like Rahm Emanuel to think for a second about the votes of the kids whose schools he's shutting down on the South Side of Chicago. I would like for us to start seeing kids as fellow, rather than as merely potential, citizens.