Faux outrage over mention of a Hitler sympathizer's human traits. 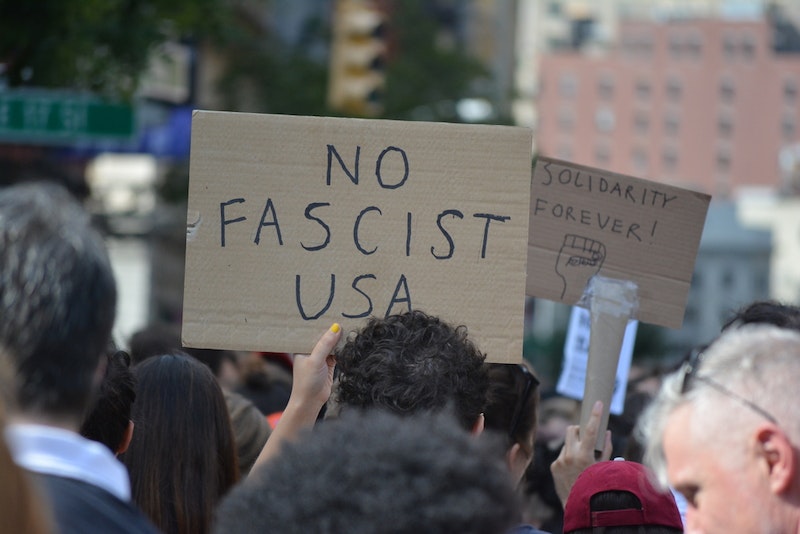 Before 29-year-old Tony Hovater and his wife Maria got married this fall, they registered with Target. Maria likes the boneless wings at the Applebee's near their modest house in New Carlisle, Ohio, while Tony might cook up some pasta for dinner as the couple's cats frolic nearby. Tony admires Adolf Hitler and wants to see the races separated, as he'd prefer not to live among non-whites. Despite the quotidian aspect of his daily life, he's a far-right white nationalist who’d be pleased to see American society guided by the ethos of the Third Reich.

Richard Fausset wrote a profile of Hovater that ran in Saturday's New York Times that juxtaposes the everyday parts of his existence with the repugnant fascist beliefs he espouses. This incensed many on the Left, who fretted loudly that this was Nazi fluff text that amounted to normalizing evil people in a time when the Trump phenomenon is already moving the Overton window in the wrong direction. The fear is that people like Hovater, a Seinfeld viewer who expresses his Naziism in more low-key ways than burning crosses on front lawns, will soon come to be seen as deserving of a seat at the table in the national debate.

Such concerns are legitimate in light of Trump's pronouncement that some of Hovater and his fellow Nazi-sympathizing protesters in Charlottesville in August were “very fine people.” Still, it's a stretch to make the case that the Times is trying to nudge the Ohio welder into the public square by detailing a handful of his regular-guy bonafides. That publication caught heavy flak for its incomprehension of the Midwestern zeitgeist after last year's presidential election, but when it decides to go to the heartland and write about a Trump supporter who’s a Nazi, those Democrats who insist that all Trump voters are Nazis get apoplectic for some reason. Isn't that exactly what they want to read?

It's hard to get more “hot button” than an article about Nazis that suggests they love their pets too, so the Times piece provoked a predictable number of angry reactions from some Jewish people concerning the unspeakable things the Nazis did to relatives during the Holocaust. This isn’t to minimize the horrors of that time, but these brutal, painful recollections would be more relevant if the U.S. government were currently rounding up Jews, or if there were any prospect of that happening. Any attempt to showcase the more human side of those involved in such crimes would be wildly inappropriate. However, under the current circumstances there could be value in presenting Nazi apologists like Hovater as individuals who aren't necessarily torturing puppies in their filthy basements. It might be useful to know that they can sometimes blend right into society.

The Left’s hypocrisy in condemning this article is best illustrated by imagining the total non-issue the Times would’ve produced by running a profile of the “polite ISIS sympathizer next door” who might grill kebabs at home as he downplayed the depravity of throwing gays off buildings in the name of Allah. The Left’s consensus would’ve been that only a bigoted, white supremacist society could’ve provided the breeding ground capable of warping a young man's mind so radically, thus alleviating most of his personal responsibility. CNN ran an article earlier this year about a 28-year-old former ISIS soldier that noted how “utterly unremarkable” he was, calling him “polite” and noting how personable he was. “To fight for the sake of Allah,” he justified ISIS barbarism, comparing it to the U.S.’ execution of those convicted of capital crimes. Zero liberal outrage.

The Left is hard to figure out. It assures us that all Trump supporters are white supremacists, but when a major liberal publication finds one and reports that he'd love to see the streets full of “happy white people” and swastikas everywhere, it's still playing into the hands of the fascists because it also mentioned his “good Midwestern manners.” The usual people on Twitter (e.g. Jemele Hill, Ezra Klein, Kumail Nanjiani) rushed to weigh in that the Times has a duty to explain, as Hill put it, “why awful people are so awful.” Such a blanket statement ignores the distinct possibility that not all souls are decipherable via a few interviews, including the one belonging to the seemingly normal American who goes off to fight for ISIS. Many of us have watched enough movies to understand that plenty of villains are well-behaved. We don't need journalists to explain this to us.