Nazi Articles Trickier Than They Look 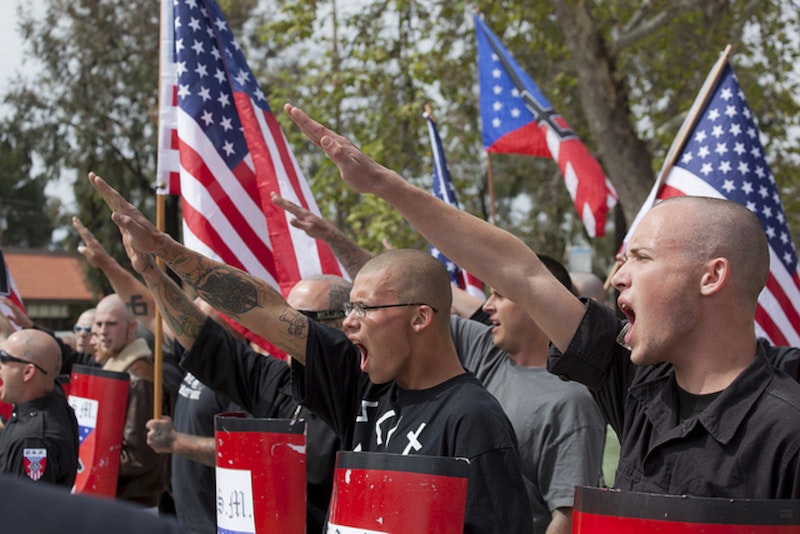 The Times is in trouble for “A Voice of Hate in the Heartland,” its much-derided profile of Tony Hovater, Dayton-area welder and Hitler fan-guy. Ezra Klein (tweet: “Of course racists shop at supermarkets and play in bands and enjoy Seinfeld and own cats. That evil is also banal is not new”) seems to think we’re all up to speed on the matter of Nazis as ordinary humans. I know I’m not, and I have my doubts about him. To know that a Nazi can be a run-of-the-mill human being—that’s one thing. To see him do it is another. Knowing is square one, the rest is advanced. Listen to this Hovater fellow explain his quizzical take on racial realities. “I’m coming at it in a mid-90s, Jewish, New York, observational-humor way,” he says. I didn’t expect that. People on social media treat this article like a strip of maggots. Unfortunately I found it interesting.

At Charlottesville the torch carriers had on khakis and oxfords. This raised a question: America’s non-meth, non-wealthy working-class and middle-class whites, the regular folk in neighborhoods that wouldn’t impress you and wouldn’t scare you—how much Nazi tolerance do they have nowadays? A higher level than I’ve been hoping for, if one goes by the Hovater profile. “A lot of girls are not really into politics,” says his fiancée, explaining how her friends deal with the couple’s Hitler inclinations.

Once this article, a good enough piece, might have got by without a mini-crisis. “But these are dangerous times,” as we’re told by a piece (“The Problem With the New York Times’ Chummy Profile of a Nazi Sympathizer”) at Quartz. I read the phrase this way. Social media has brought poisonous ideas a good deal of exposure. A Times article with the wrong tone may be the one bit too many; the hateful idea may reach critical mass and normalize its way into everybody’s head. That’s the fear, and the fear isn’t wrong. We all remember a year ago.

The Times has the answer: pushback. What does that mean? I’d say it means playing the “This is no good” pedal good and loud. Don’t rely on juxtaposition and deadpan recital. Say bad thing bad, and do it every few paragraphs. Of course, doing so knocks a hole in the traditional even-handed, both-sides approach to journalism. But that will happen. Take the rule against calling someone a liar. Since reporters began covering Donald Trump’s verbal diarrhea, it doesn’t look like as much of a rule.

For decades news writing was corseted in a set of conventions meant to keep people from thinking a given story might not be fair. New corseting is under development. Its aim is to keep people from thinking that a given story promotes or tolerates certain unfavored ideas. That’s my guess, anyway. The approach ought to work, because the public appreciates being instructed over and over about which feelings it should have. The forces of tolerance learned as much on November 8, 2016. In other words, all the choices are bad. That’s how we know we live in an age of crud.