From Conspiracy to Corruption

What was “paranoia” is now just the news. 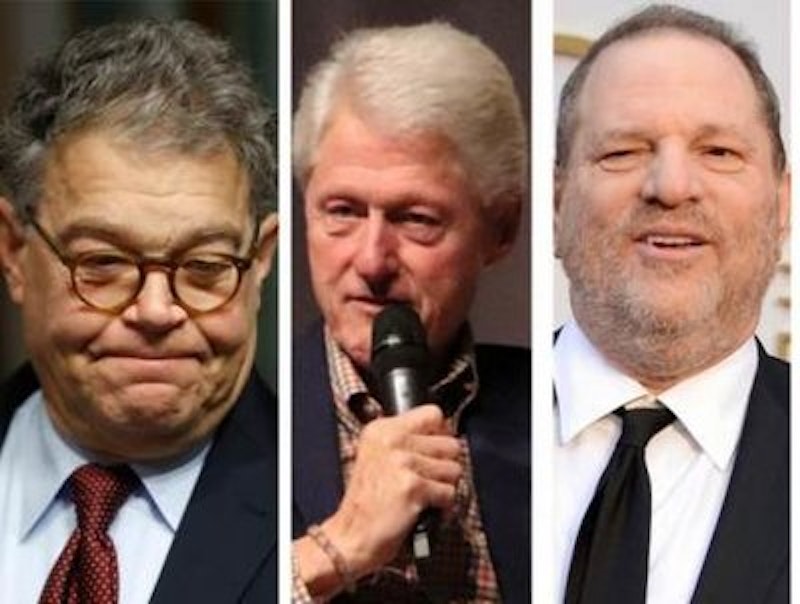 As long as terrible deeds by government or corporations are kept largely secret, we describe them as “conspiracies.” Once the deeds are on flagrant public display, we call them “corruption.” If there’s no hope of making the term “conspiracy” respectable, now might be a good point in history at which to make the term “corruption” far more common. The more horrible deeds get hauled out into the light of day, the easier it is to do that.

If you’d said a couple of years ago that many prominent Hollywood figures were engaged in chronic sexual assault and that the whole town, even the people who lecture America about sexual assault, was hushing it up, you’d be a “conspiracy theorist.” You’d be deemed extra-crazy (and a bigot) if you said, for instance, that Harvey Weinstein was deploying former Israeli intelligence agents to harass his female critics, but that appears to be true now as well.

Now, just like a citizen in any so-called banana republic, instead of whispering “conspiracy,” you can point to what everyone agrees is true and lament “rampant corruption.” And it is rampant.

It’s beginning to look as if corruption is a phenomenon far larger than the bloated Weinstein—and larger even than sex, lest we forget that’s just one of many arenas in which humans behave terribly. Just wait until we start hearing comparable waves of revelations about all the theft, contract fraud, non-sexual battery, etc.—not just in Hollywood but in DC and everywhere—with the same sort of transparency and simultaneity we’ve been hearing about Hollywood sex antics, thanks in large part to the increased strategic coordination made possible by social media. It’s easier than ever before in history to say, “They can’t take us all down if we act at the same time,” as libertarians, collectivist leftists, and hipster flashmob dancers alike should appreciate.

James Gunn, who has directed a couple of the better Marvel movies, may have been the only celeb to see the full moral potential in the current moment when, instead of giggling or frowning at the latest gossip, he tweeted that we’re being given a chance to create “a better world.” And I’d indeed counsel moral renewal rather than despair.

Keep in mind the hidden silver lining of harassment math: If, say, Weinstein harassed dozens and director James Toback harassed hundreds who’ve now come forward to accuse him, this may well explain how decent men could think “Few men would do these things” without contradicting the women who think “Half the women I know have suffered these behaviors.” If the perps are very prolific (and powerful), they may be having an outsize influence even as most of us behave well—indeed, even as most of us find it jaw-droppingly shocking that Charlie Rose walked around the office with his pants off or what have you.

If scandalous sex news is the lure people need to start a broader moral cleansing, I’m all for it. There’s plenty of material to work with, in both the public and private sectors.

I don’t pretend to have investigated all the facts in each of the cases mentioned in this column, but if recent news reports are accurate, Glee actress Naya Rivera has been arrested for domestic violence, Corey Feldman is finally naming Hollywood pedophiles, the increasingly conservative-sounding Morrissey is (perhaps wisely) observing that some amount of sexual harassment or transgression is to be expected in certain quarters, and liberals are very suddenly saying they should’ve condemned Bill Clinton, now that he and his wife are not as strategically useful to them (for laughs, you can watch this old clip of a serious Charlie Rose interviewing Kevin Spacey about Bill Clinton’s sex scandals). And Jeffrey Tambor is ousted from his TV show, a mere year after the hipster-liberal mainstream was gushing over Transparent? Hilarious! How long before Ellen is caught robbing a bank?

And it’s not just sex secrets spilling out lately, keep in mind. (If people focus too much on sex, they start to panic, leading to things like the sad survey results recently noted by the Economist, which reported that one in four young women now consider any instance of a male asking out a female to be harassment.) Instead of just pestering George H.W. Bush about his chronic ass-grabbing, what if people started pestering the aging former intelligence director about what he knows of, say, murder?

Remember, recent weeks have also been an early Christmas for JFK conspiracy theorists—pardon me, corruption theorists—who thanks to newly-released files now know that some government experts believed there was more than one shooter in Dallas and know that one witness suggested Jack Ruby knew in advance about the assassination. Near-simultaneously, musician Tom DeLonge has unveiled his project aimed at exposing government UFO secrets, and even if that’s just a bizarre con, the fact that he really has high-level military and intelligence-sector people taking to the stage with him to talk about the project supportively is one of those things that remain irreducibly weird even if you don’t draw the weirdest-possible conclusions.

Ditto with regard to whatever the hell’s going on in Saudi Arabia right now, where there are rumors of American mercenaries helping interrogate arrested princes by suspending the princes upside down, including one who was a major investor in Citibank and Fox News.

The conspiracy theories turn into conspiracy facts so quickly lately that the current documentary What Happened in Vegas about rampant police corruption in that city was already near-finished when the Mandalay Bay massacre occurred, with its murky timelines and unanswered questions, providing a timely new peg. These days, reality coughs up new confirming evidence almost as quickly as the Internet does.

Even the most ludicrous-sounding, trashy conspiracy theories have gotten at least a little more credible in the past few months.

Take Dean Devlin’s failed disaster movie Geostorm, which, as I wrote in a previous column, is basically a remake of his conspiracy theorist friend Roland Emmerich’s student film from the 1980s about weather-controlling satellites. Emmerich’s interest in such topics (on display in movies ranging from 10,000 BC to 2012) is rooted in the idea that there may have been a real “Flood” of cosmic proportions on the Earth about 13,000 years ago—and a growing number of scientists think that may be true. Whether it was just a sudden post-Ice Age glacial melt or something more specific and dire like a comet impact, it looks at least a little less crazy than it used to to say that it may not be a coincidence all those flood myths—from the biblical one to Plato’s tale of Atlantis—seem to date to around 11,000 BC.

In this boom time of shocking revelations, then, I really hate to see so many people still mired in the petty old left-right partisanship. If we’re handed a chance to expose all the elite as degenerates, do you really want to waste it arguing about whether it’d be creepier to be groped by Harvey Weinstein or Roy Moore? Look at the big picture.

To avoid having to take sides in a debate like that, I recommend simply avoiding all liberals and religious people. I think the remaining portion of the population will be having some increasingly interesting conversations in the strange days ahead.