The Laziness of Boomer Pundits

Maureen Dowd and her peers crave a Clinton/Bush 2016 election. 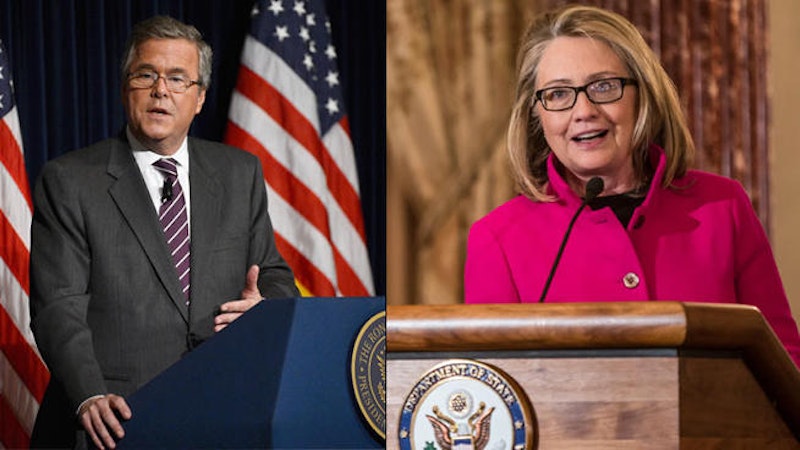 I don’t often read New York Times op-ed columnist Maureen Dowd anymore—too much silliness, fantasy and dumb nicknames—but the headline for her March 2 phone-in, “Brace Yourself for Hillary and Jeb,” on the front page of the “Review” section, was too rich to pass up. Ostensibly, it’s a frowning build-up for what Dowd considers the inevitable 2016 presidential match-up: “Our meritocratic society seems increasingly nepotistic and dynastic.” No mention of the Kennedys, but then again, JFK’s 1960 election made her feel “young and excited,” and at 62, she was young then. In addition, she includes Barbara Bush’s well-publicized remark that the country can find candidates without the last name Bush, and quotes an unnamed “major Romney donor” that if Jeb runs he “clears the field.” Easy!

Hillary Clinton too, which is far more plausible—although four words in the column, “if she is healthy,” are worth considering. What were once derided as the “supermarket tabloids” before the mainstream broadsheets lost their luster and profits, have run sensational stories about the 66-year-old suffering from a brain tumor. Maybe, maybe not, but let’s not forget it was the National Enquirer that brought down the forever disgraced John Edwards.

Dowd feigns weariness at the prospect of a Clinton/Bush election, devoting most of the column to the recently released reams of documents from Bill Clinton’s eight-year presidency, saying that the notion of re-hashing Monica Lewinsky, Whitewater, Paula Jones, impeachment, Hillary’s failed health care initiative, Vince Foster, etc. is really too much to bear. Yet, I don’t think it’s a stretch to speculate that Boomer (and older) pundits relish a Hillary/Jeb competition. Why? One, it’d be a nostalgic campaign for them, a last hurrah. More importantly, covering and issuing opinions on the race would be so simple, since they already know the history of both politicians and fresh, painstaking research would be minimal. It’s not only Hillary who’s tired!

(Joe Biden biographer Jules Witcover, 87, has contributed, too, warning the DC establishment that Vice President is not out of the running.)

If such an election occurs—which I highly doubt, since Jeb’s last name is still mud—columnists like Dowd, Witcover, Joe Klein, Al Hunt, E.J. Dionne, Elizabeth Drew, Richard Cohen, Gail Collins, George Will, Frank Rich and Fred Barnes, to name just a very few, would be back in the limelight, to the detriment of their much younger colleagues. Besides, if you’ve written hundreds of thousands of words on politics in long careers, who wants to wade into the territory of Marco Rubio, Elizabeth Warren, Martin O’Malley, and most scary of all, Rand Paul? That would be a lot of work, and really, who needs it?

Dowd’s conclusion is a warm-up for 2016: “Hillary has spent so much time searching for the right identity, listening to others tell her who to be, resisting and following advice on being ‘real,’ that it leaves us with the same question we had when she first came on the stage in 1992. Who is she?”

Come again? Maybe Dowd and her cohorts are still mystified as to Hillary Clinton’s true “identity”—though I doubt it—but it’s a safe bet that the vast majority of America’s electorate has no such itch to probe any further. If she runs, people will either vote for her or not. The mystery’s gone.