Baltimore’s City Paper and Me

No matter its future, I cherish the weekly. 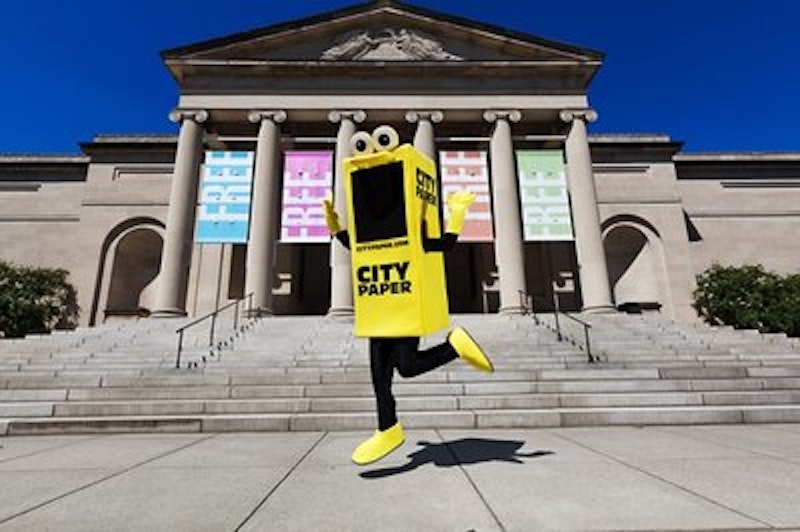 I didn't know what to write; I was blocked. There was too little to say, and also too much. I'd just spent the summer of 1997—the summer between my sophomore and junior years of college—interning at Baltimore’s City Paper when I wasn't dunking dirty dishes in suds at a country club. Fall had arrived, and with it the moment where I had to justify the experience for academic credit. So I cracked my knuckles and spent several pages proving to Dr. Richard Gillin that I'd done more than make photocopies and fetch coffee: that I'd checked myriad facts, written hard-thought record reviews, hit up a preview screening of the Spawn movie and critiqued that, churned out tons of free-wheeling weekly blurbs, and constructed a feature on the Atomic Books-affiliated Atomic TV. That I'd dug through the hardbound stacks, doing research. That I'd cold-called columnists and been treated like shit. That while I'd relished the opportunity to intern at the alternative weekly I'd worshipped since boyhood, the thrill was deadened somewhat by what I interpreted, at the time, as a sort of too-hip, "fuck you" ennui that I found summarily unappetizing. I loved it, and I hated it; I rejected it, and demanded more.

That summer was supposed to culminate in a trip to Mexico to visit a friend, but I wound up marooned in Ocean City before returning to school. As life scrolled forward blithely, mutating and percolating, City Paper remained a constant; a trickle of quick-hit music assignments became a more regular flow, and a significant aspect of how I defined myself as a journalist. Maybe my undergraduate cap feathers includes landing poems in the Washington College Review, getting to edit features for the school paper for two years, to edit the standalone features magazine for one.

Maybe I contributed to Devil In The Woods Magazine a couple times. Maybe I caught a wave at www.paperthinwalls.com while that site was in full swing, during the Getty Images ownership years. Maybe I earned my way on-staff at Grooves or Signal-to-Noise or Minneapolis’ City Pages or www.staticmultimedia.com; maybe I was a daily reporter at different newspapers for a couple years, or a proofreader at SAIC, or a technical writer at HP.

But at my core I was a City Paper soldier, and I was goddamned proud of that; that was what really, truly meant something to me, where I drew my first freelance paycheck. A City Paper envelope was pinned to my dorm room door, and for years upon years I smiled through bared teeth as friends, relatives, and strangers alike dismissed the paper out of hand as something insubstantial and inessential. The comings and goings among the staff were fascinating to me, and even when I wasn't living in or near the city, I implored my honorable father to stockpile physical copies for me.

Three editors there—Lee Gardner, Bret McCabe, and Jess Harvell, primarily, in various roles, at different junctures—set the standard for me in terms of what it meant to be arts editors. Being an arts editor didn't just mean understanding that communication was a two-way street, but understanding that communication isn't necessarily limited to discussing pitches; communication was about random conversations and recommendations and shooting the shit, expanding the editor/writer relationship. It also had to do with leading by example, and studying the work of these three week after week did more to help hone my critical faculties and voice that Rolling Stone, Pitchfork, or Robert Christgau's Dean's List could. One could be reverent, droll, funny, scathing, probing, and insightful in the space of a 250-word CD review—a review that might not necessarily be flashy or iconoclastic, but one that might linger in readers' sightlines for weeks.

But things kept changing; I kept changing. I got married, had a son, tried on a few careers until I stumbled into one that seemed to work, saw the outlets for my writing expand, contract, expand, contract, expand, contract. The fierce desire of youth to conquer the world one high-profile gig at a time gave way to an acceptance of limits and a realization that being an adult meant devoting more energy to professional and parental pursuits. The City Paper kept changing, too. Page counts dropped; assignments were harder to come by; editors moved on; story rates dropped; finding physical copies became considerably more difficult. For better or for worse—as with so many alternative weeklies circa 2008 forward—the fare became much more "local" and/or tied to time pegs, like book readings or shows.

If you weren't living in and breathing the air of Baltimore, or any major city where you were writing for the local, the likelihood of being in the mix was slim to none; if you couldn't talk to an editor there, in person, there was a sense that little or nothing you had to say much mattered. Blogs ate up editors' time, making this problem even worse. The possibility of a piece being cut for space had always loomed, but it began to seem like the norm. The format shrank. Appearing "in print" started to seem like a laughable thing. "Furlough days" bedeviled everyone. The clock to doomsday clicked louder and louder.

After last year, I decided, with some regret, to abandon ship—but I took solace in the belief that City Paper would always be there, waiting, in scattered yellow and black newspaper boxes or at its link. Now that The Sun has acquired City Paper, that future is in doubt, and I'm left with so many memories—some in the archives, some lost to history, some ethereal. Pope Watch! The Wire features! The magic of Wiley Hall III's columns, which tackled race but wandered far beyond. Al Shipley's amazing rap writing. Edward Ericson's myriad exposes. Joe MacLeod's visual meth hits. All the weird, warped cartoonists that twisted my consciousness from the age of 13 or so forward, from Derf through to Emily Flake. Larnell Butler Custis, "afro-centric feminist." Lee Gardner, on the telephone with me, performing a very impassioned Ol' Dirty Bastard impression. How sweet, thoughtful, and helpful Molly Rath, Van Smith, and Brennen Jensen were while being amazing investigative reporters juggling multiple stories. Come what may, or may not, the City Paper is forever—its spirit lives on in the hearts and minds of everyone who built it, managed it, and took it seriously.