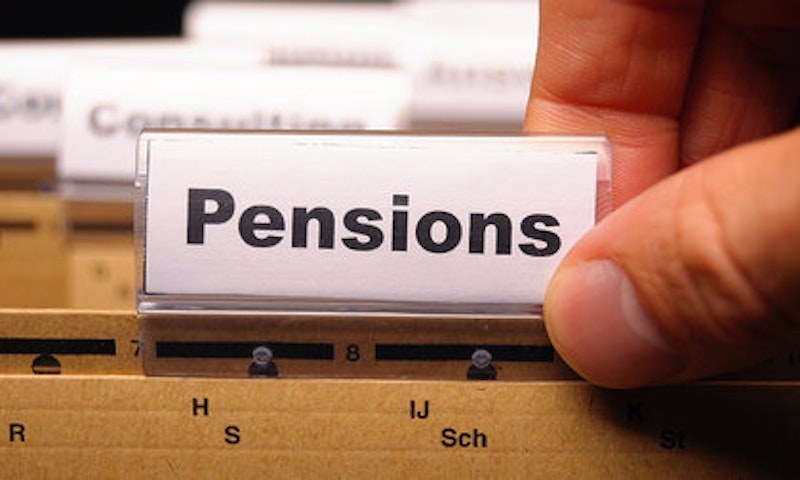 When negotiators for AFSME met with O’Malley Administration officials to discuss the Governor’s decision to renege on a funding promise to bolster the state’s pension system, the Governor’s representatives made an offer that union officials couldn’t refuse: either accept the cut in pension funding or no pay raise for state employees this year.

Faced with the coiled fist of the Governor’s office and a hellish Catch-22, the union officials decided to take the immediate cash in the form of three percent salary hikes for their members and sit quietly on the sidelines while Martin O’Malley breaks his promise and compromises the future of the state’s underfunded retirement fund.

Back in 2011, O’Malley badgered reluctant AFSME leaders into supporting reforms that were intended to bolster the pension fund. They included increased contributions by state employees and reduced benefits for new employees. The key to the reforms was O’Malley’s pledge to contribute an additional $300 million a year to the retirement fund from the newly realized savings that came from employees’ paychecks. Remove the camouflage and pension reform was just another targeted tax increase.

It was mainly with the support of Maryland’s public employee unions that O’Malley was able to win approval of the pension reforms in the General Assembly that is heavily influenced by organized labor’s money and manpower in campaigns.

Going back on his word and breaking trust with AFSME as well as the citizens of Maryland, O’Malley last year as well as this year withheld $100 million from the proffered increase in contributions as a sleight-of-hand to plug a deficit in the state’s $39.3 billion budget. As the budget meanders through the legislature, the long-haul effect of O’Malley’s decision in his final year as governor is to deprive the pension fund of $1.8 billion in money that would have been invested for future retirees.

O’Malley had promised to close a general fund deficit of $421 million without additional taxes. He said nothing about the pension fund canard. But even more bad news arrived last week via the Board of Revenue Estimates. The Board revised its revenue projections downward by $240 million, $48 million short in sales tax collections and $180 million down in income taxes, the result of a malingering economy.

Even more lethal, though, O’Malley’s duplicitous action has forced a wary eye on the state’s vaunted Triple-A bond rating, one of only a handful in the nation and one of the most heavily indebted states that holds the coveted rating. The Triple-A bond rating means low interest rates on borrowing and saves billions on the 15-year general obligation bond interest payments.

Both Treasurer Nancy Kopp, retirement system chairman, and Comptroller Peter Franchot, vice chairman, warned in written testimony before the legislature that the state’s Triple-A bond rating would be threatened unless O’Malley’s budget shell game was rejected:

“But, we would also note that Moody’s, Standard & Poor’s and Fitch all specifically remarked upon the retention of the $100 million in FY 2014 and note that a permanent reduction in reinvested savings to the system is under consideration beginning in Fiscal Year 2015. Specifically, Moody’s Investor noted that ‘[f]ailure to adhere to plans to address low pension funding ratios’ could result in lowering of Maryland’s AAA bond rating. Standard & Poor’s reiterated this statement… S&P went on to assert that [t]he state’s below average pension funded ratios continue to represent downside risk to the rating.”

Maryland’s retirement system is a $40 billion trust fund. Every month, 138,000 retirees rely on a check to help them meet their nut. (Disclosure: I collect a state pension.) Last year, the pension fund paid out nearly $3 billion, returning to retired state employees a fiduciary promise that they earned during their working years. O’Malley’s cynical disregard for their trust is a threat to their future security.

Franchot, a former legislator who served on fiscal committees, even got into a feisty personal disagreement with his former colleagues when they challenged him to find $100 million in cuts in O’Malley’s budget proposal. He reminded committee members, rightly, that cutting the budget is their function, not his.

Identifying $100 million in cuts in a $40 billion budget requires no magic. The difficulty lies not in the numbers but in lawmakers’ refusal to sacrifice pet projects and programs as well as a reluctance to tamper with each other’s favored constituent awards. Another natural inhibitor is that fully 80 percent of the budget comprises mandated programs that can’t be touched without major and unlikely legislative revisions.

Yet within the same budget wherein O’Malley is plundering the pension system, a proposal to increase legislative salaries and expenses appears to be progressing without difficulty or objection. The proposal would gradually increase annual salaries to $50,330 and those of the House speaker and Senate president to $65,371. Per diem allowances would rise to $101.

To be even-handed, legislative salary increases are recommended by a commission and can only be raised every four years by the outgoing Assembly. If the proposed increase is not formally rejected by the legislature, the pay hikes automatically go into effect. The legislature rejected increases four years ago because the recession would have made them appear rapacious.

But get a load of this: At the same time O’Malley and legislators are raiding the pension fund they are also giving millionaires a huge election-year tax break. They are adjusting Maryland’s estate tax to match the federal threshold which will cost the state an estimated $130 million a year in revenue.

And while this, the term-limited O’Malley’s final budget, contains no significant new spending programs, all of the major candidates trying to succeed O’Malley are proposing costly new programs as well as spending cuts against a budget that is essentially unbalanced without major poaching. According to Republican legislators, O’Malley has increased 80 tolls, taxes and fees during his seven years as governor. Add the pension raid to the list.

There are expensive proposals to expand Pre-K, scholarships to supplement the Dream Act, a proposal to reduce the corporate income tax and plans to reduce the personal income tax or to eliminate it completely. Expect even more spending proposals and financial gestures to interest groups during this controversial and unsettled election year.

O’Malley’s betrayal of his promise to AFSME as well as Maryland’s retirees and citizens is also an act of defiance of the three major bond-rating agencies as he prepares to hand off Maryland’s fiscal burdens to his successors. It’s also a questionable launch to a presidential campaign, if that’s what his next adventure is and not posturing for 2020 or 2024 or even more rambunctious, a book deal and/or a TV gig. The road to Annapolis is paved with good intentions and broken promises.