Conservatism Is a Fandom

Fun, but you can't govern from a clubhouse. 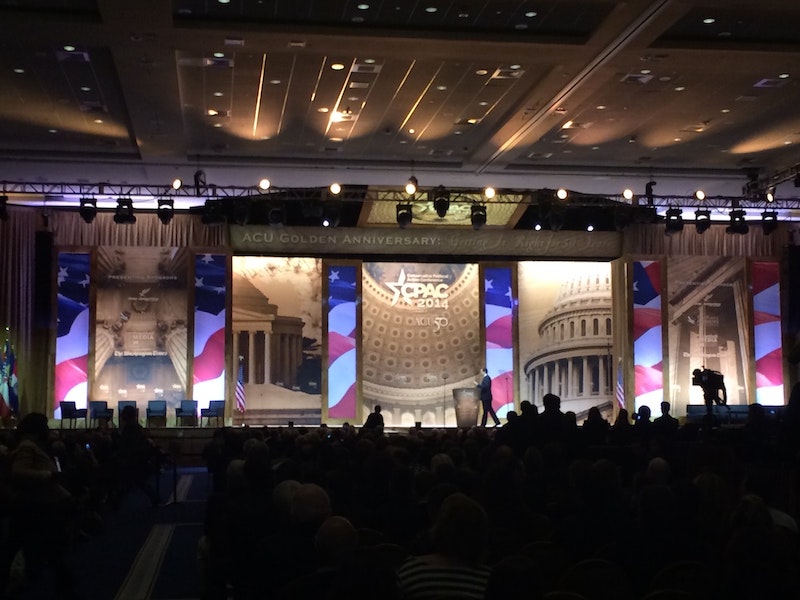 Democrats are wishy-washy spineless vacillators; Republicans may be a little nutty, but at least they believe in something.

Such are the stereotypes, and often they have an uncomfortable ring of truth. In The American Prospect, Paul Waldman, reporting on CPAC, runs a slight variation on the theme. Commenting on Mitch McConnell's address at the conservative conference, Waldman notes that the Senate Minority Leader got up on stage with a big old gun, because everyone knows that that means, "I am a conservative and I am pandering to my conservative brethren. Cheer or I'll shoot!" Waldman mused:

Liberals really lack any talismanic physical objects they can display to their supporters to demonstrate their ideological bona fides. If a Democrat went before a liberal audience and wanted to offer a quick, easily understood visual to demonstrate to the crowd that she's one of them, what could she hoist over her head in defiance of the people they all hate? There really isn't anything. And that extends to the other parts of campaigning. If you took away all the narration and on-screen text from any Democrat's campaign ad, you wouldn't be able to tell whether it was a liberal or a conservative.

"Republican" is a symbolic stance, suffused in meaning and iconography: guns, Bibles, country music, and maybe the Confederate flag lurking just around the pick-up. "Democrat," on the other hand, is just a party affiliation. It doesn't have specific music, a holy book or chosen armament.

Waldman suggests that this might be because Democrats have a more diverse, broader coalition, but I'm not convinced. Lots of different kinds of people vote Republican too. Many of them don't even own guns. Symbols always oversimplify; that's sort of the point. But why do Republicans embrace that simplification so enthusiastically, while Democrats don't?

I think the answer is that the two parties see themselves in different ways. Democrats tend to see themselves as a political party; a group of otherwise unaffiliated people brought together in the name of various pragmatic policy goals. Republicans, on the other hand, have turned into something that looks less like a political party and more like a fandom. Conservatism has its own media network—Fox News, talk radio—just as sci-fi fandom has its own dedicated blogs and sites. Conservatism has media stars like Rush Limbaugh, Ann Coulter, or Michelle Malkin.

Progressives like Waldman and me sometimes envy this fandom aspect of the right, and no wonder. Fandom's fun. People get an adrenalin kick from having their views confirmed by Fox News; they laugh along with Limbaugh, they party at CPAC, as Michelle Cottle writes:

CPAC draws scads of young folks, many of them sporting bowties, some of them in American-flag-print shorts, and at least one sporting a sky-high orange-and-green Mohawk. Despite the prohibition on official campaign paraphernalia, budding young political operatives handed out buttons and stickers proclaiming, “Stand with Rand” or “Cruz Crew.” Some guy was striding around on super-tall stilts, carrying a “Reagan for President sign.” His female counterpart had no signage, but was made up like a sexy Uncle Sam.

Fandom's entertaining, whether you're getting together to geek out over Jack Kirby back issues, Twilight fan fiction or the ins and outs of Benghazi. The problem, though, is that fandom, while a good model for a fun party, is not an especially good blueprint for governing. In particular, the typical fandom obsession with authenticity is a real barrier to building a governing coalition. Fandoms tend to spend a lot of time policing their borders. Metalheads declare this or that act is not sufficiently metal and comics geeks proclaim that "fake geek girls" are trying to invade their space. You have your awesome clubhouse, but it's not as awesome if there's no one to push out.

So Republicans get cool props… but they also get a poisonous intra-party dynamic. Commenters like Jonathan Bernstein have labeled this the "post-policy" Republican party which he defines as "the idea that Republicans appear to have lost interest in developing real public policy but have instead settled for mindless slogans and knee-jerk opposition to everything Barack Obama says."

Republicans have stopped trying to pass laws or make their constituents happy. Bernstein points out, for example, that they won't tinker with Obamacare to make it more appealing for Republican-aligned groups like small-business owners because they don't want to be seen as compromising. They want to be more metal than metal; they don't want to be fake geeks. So they ritually repeal Obamacare again and again, the same way you'd go to The Rocky Horror Picture Show for the 50th time. It's a ritual of identification, not a legislative plan. Republicans get better talismans because all they care about is talismans. If they want to be a functional governing party again, they're probably going to have to put down that gun.