An Ode to City Paper

Doing mental cartwheels over how Baltimore is perceived overseas. 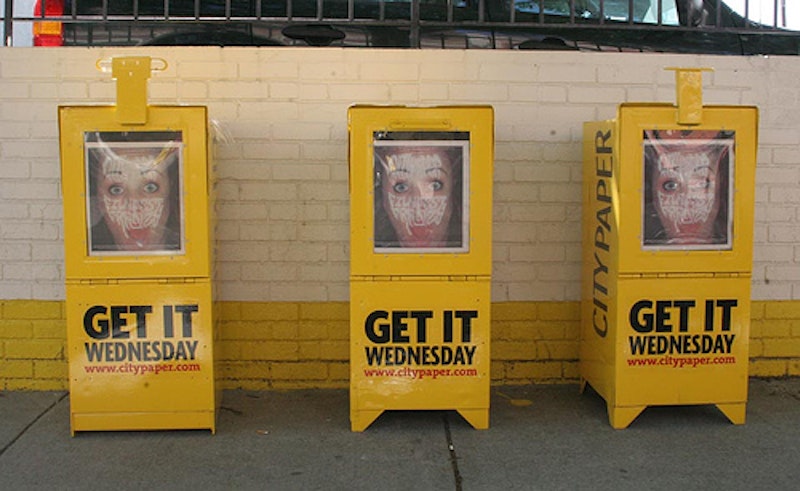 Vice published a photo essay on Baltimore this week that’s slapdash, lazy, spiteful and based on nothing at all. “Baltimore is a Paradise” is the headline, but the lede is a shameless steaming shit: “Baltimore is a place bereft of the power of the District, the history of Philadelphia or the cultural and economic gravity of New York.” Okay, guy. “It exists in a blind spot, and this post-industrial cloaking device is the backdrop for these photos. Lives of little consequence, playing out in unseen spaces on the set of an HBO drama I’ll never find the time to watch.” Really, what kind of asshole says anyone’s life is of little consequence, and then humblebrags about being too busy to watch pay-per-view? Nick Biddle. That’s all he has to say, the rest of the piece is photos, bad photos by Ashley Annello, photos that are poorly composed, poorly curated, lacking any sort of message that goes deeper than the boilerplate caricature people from around the world (who know Baltimore exists): Drugs, drink, crime, blight, John Waters, that show... really irritating.

I know this is Vice’s M.O. and cities and cultures are frequently misrepresented, but this is just so cursory, like he didn’t even get through half the Wikipedia intro paragraph before presenting an absurdly narrow take. And the presentation is just so precious: this is the fuckin’ whip shit of all fuckin’ shitter bongers, Baltimore, Grungiest City in America, where everything goes to die. Watch these photogenic white kids drink beer and smoke cigs (joints? who knows!) in wood-paneled basements and look at their iPhones in a shooting gallery! At least they’ve seen Putty Hill because Matt Porterfield’s style is aped here, badly. If you’re going to try and build on the myth of Baltimore as a land of drugs and death and decay, at least do it in a cool way!

This really got me in a nasty mood, now that the reality of The Sun buying City Paper begun to really hit. (Disclosure: my father co-founded CP, and sold it in 1987, five years before I was born.) With the short-term future of the paper still in doubt and the long-term prognosis practically terminal, I think Biddle and Annello’s caustic misrepresentation of our city bugged me because I wonder how close they are to being right. I wonder how much longer we’ll have free newspapers and whether the somewhat unique and weird culture here is either infected by pudgy-faced developer parasites inching their way up N. Charles St., or we continue to sink into oblivion, row homes rotting on St. Paul, dead zones, food deserts everywhere. Even with the inevitable decline of print during the late 90s/early 00’s, and the imminent death of major papers like The New York Times within 15 years, City Paper was still a vital voice and much more alive than the bag-of-bones Sun. It’s bleak in Baltimore today.