But try telling that to a Salon pundit. 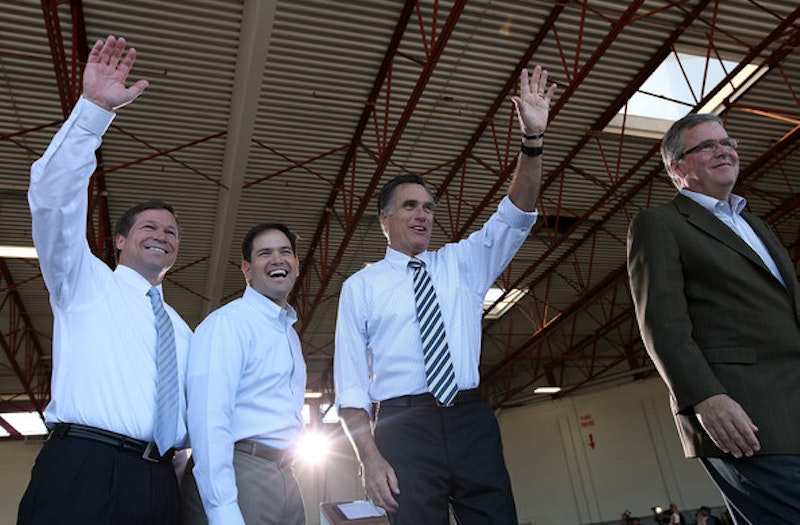 Jeb Bush will have big problems winning the Republican nomination because he’s too much like Mitt Romney.

Can you catch the problem with that statement?

The logic here breaks down badly. Newell’s forced to feebly argue that Newt Gingrich and Rick Santorum almost beat Romney. This is silliness. Romney was the front-runner throughout the primaries; Gingrich and Santorum had exactly zero chance of winning anything except maybe Fox News appearances; their institutional party support was always small. Nor did the attacks hurt Romney in the general election, where he did just about exactly as well as the fundamentals suggested he would. The idea that being a big, ruthless businessman is going to hurt you in a Republican primary is absurd, and directly contradicted by the fact that the last nominee was in fact a big, ruthless businessman. This is your evidence that Jeb Bush can't be the Republican candidate?

Newell goes on to argue that Bush is going to have troubles because of his involvement with Lehman Brothers, but come on. Most voters don't have any idea what Lehman Brothers is. Complicated financial transactions, no matter how odious, are extremely unlikely to sink a candidate. Sexual impropriety everyone can understand; start talking about banks and eyes glaze over. Voters understand getting stuck in traffic, which is why Chris Christie's thuggish bridge scandal might actually damage him. But Bush's connection to Lehman Brothers means little, and won’t have the slightest effect on his nomination, or lack thereof.

Newell admits that Bush's resources and party backing might win him the nomination anyway—which is another way of admitting, by the back door, that Bush is an entirely legitimate candidate, whose strengths could easily outweigh his weaknesses. "Why do the elite Republicans seem so intent to get this fellow, who has all sorts of glaring problems, in the running?" Newell asks. Well, because even you admit that Bush could win the primary and the general election. Winning is the whole game here. You don't get points, or lose them, based on whether you happen to appeal to political columnists at Salon.

So does that mean Bush will win the nomination? I have no idea. He's certainly a viable candidate—there are a bunch of other viable Republicans running, from Scott Walker to Christie. Walker, Christie, Bobby Jindal and anybody else who is going to run will have weaknesses too. Pundits sometimes talk as if there's some perfect candidate somewhere, untarnished by controversial opinions, or electoral or policy failures, or scandal of any sort. Those candidates don't exist. Every person who’s won the presidency had failures as a candidate. Barack Obama had Jeremiah Wright. John McCain is a compulsive asshole who alienated huge swaths of his own party. Ronald Reagan was ideologically way to the right of center. John Kennedy was Catholic.

But you don't need to be a perfect candidate to win a nomination. You just need to be less imperfect than the competition. Bush's connection to George W. might damage him with some voters; so could his stance on immigration reform. But everybody else has connections or policies that could damage them too.