The Times writer states the obvious. 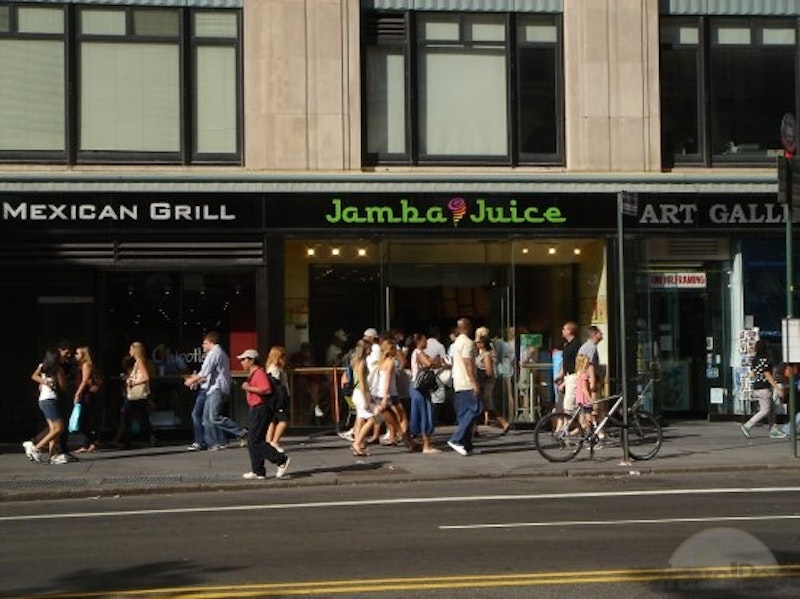 I’ve no idea why Hugo Lindgren’s New York Times magazine story on Nov. 24, “A Reason to Root for Dubai on the Hudson,” was greeted with lavish social media acclaim. Maybe it was a fleeting jolt of sympathy for Lindgren, who either quit or was fired as the Times magazine’s editor last month, maybe it was an anachronistic feeling that all essays about cultural trends in NYC must first appear in the Times to be real. In 2013, this is bewildering. I happen to enjoy Lindgren’s writing, but this piece was not up to snuff.

I read, with muted interest, Lindgren’s obvious observation that the Manhattan he once knew has become a “shopping mall,” as independent retailers and restaurants—you know, the places with “character”—have been replaced by anonymous chains like Jamba Juice, 7-11, Starbucks and Duane Reades. Oh, and ugly condo projects in the place of cool diners and bars that could no longer afford the rent. Never mind that this lamentable phenomenon is happening in cities across the country—and has been for 15 years or so—and so travelers, sort of like rock stars on endless tours, can look out their Four Seasons hotel window upon waking, and groggily forget where they are. My son and I were driving down York Rd. in Baltimore County last weekend and, oddly, at least to me, Booker said how much he liked motoring down that stretch of road, pointing out a diner that he and some high school friends used to frequent. From my passenger’s view, it was a strip of anonymous chains, car dealerships and banks, and, save the still-colorful leaves on the trees, might’ve been Los Angeles, Dallas, Atlanta or Miami.

Lindgren writes in particular about Greenwich Village, where he and his wife live, and launches into a nostalgia jag that’s been written about 1000 times before. He adds zippo, writing that while the Village in the 80s held on as a “gorgeous ruin,” a mecca for writers, artists and “all the stuff they loved,” it’s now a “soulless playground” that even those dreaded “bankers” are bummed out about. He writes: "A lot of this [cool stores, bohemian haunts] survived into the 1990s, when I got out of college and moved back to New York. In those days, in my 20s, with nothing but time on my hands, my favorite activity was to tromp all over downtown for hours on end, a copy of The Village Voice folded under my arm, stopping at as many bookstores and record shops as possible… The magazine rack at Spring Street Books was a sacred shrine. [That’s too rich for my blood; Spring Street had a decent newsstand, but it was no more “sacred” than a dozen other outlets.] In the days before the Internet, this is how you kept up with culture. You had to put the time in. You had to cover ground… [T]hat’s what I loved most about the city, and almost all that stuff is gone. I’d trade the whole Internet to have it back."

You can’t trade back the Internet, Hugo, but I suppose you could get dentures and a cane to carry that prematurely aged 45-year-old body around to “cover ground.” And let’s remember that Tower and Virgin Records and Barnes & Noble, incredibly popular with New Yorkers at the end of the last century, squeezed out a lot of the indie shops that were once bunched together, one after the other, on E. 8th St., among other locations.

In fairness to Lindgren, I also miss the yesteryear of abundant newsstands—who doesn’t look back fondly on the 90s?—and the excitement of Wednesday mornings when, after dropping off the kids at school in Tribeca, I’d pick up the Times, Voice, The New York Observer, 7 Days (for its short tenure) and Wall Street Journal. At the time, my paper, New York Press, also came out on Wednesdays, so the mornings made for leisurely reading. But as there’s no sense in denying modern life, I’ll move on.

Lindgren closes his article with an imaginative, if somewhat daft but funny, scenario of the future New York. He writes about the current construction on the West Side, in the 50s, of swanky high-rises that will presumably cater to very wealthy men and women from distant places, hence his phrase “Dubai on the Hudson.” In Lindgren’s fantasy, all the “hot” money will travel to “the old dirty waterfront,” and soon the internationals will be pampered by “helicopter pads,” “submarine launches” and “for-profit schools that promise Mandarin fluency in kindergarten, floor-to-ceiling touch screens and P.E. classes taught by Olympic gold medalists.” And in Lindgren’s continued reverie—maybe he was dipping into Coleridge’s stash—the Village will become deserted as the chains and upscale joints move uptown, rent prices will drop (when has that ever happened?) and the neighborhood will get scuzzy and affordable and home to wacky, small independent stores.

I’m guessing anything’s possible, especially since Mr. Redistributionist, the incoming Mayor Bill de Blasio, is apparently intent on leaving an immediate stamp on the city. But it’s not likely: even in the late 70s (and this was just before the harrowing and heartbreaking daily scenes of AIDS-ravaged men panhandling on the streets), rent was astronomical for artists, and well, most everyone else not far removed from a college degree. One of my brothers fought tooth and claw for a shitty five-floor walk-up on the pre-gentrified Elizabeth St. in 1980, forfeiting a larcenous “key fee” to the landlord (or previous tenant, I can’t remember) and somehow made ends meet. Barely. The morning after he and his wife slept in their new abode, he walked outside to get a newspaper, stepped over a bum’s fresh dump, and then saw that his pick-up truck was vandalized. Is this the New York Lindgren pines for?