The Invisibility of Whiteness 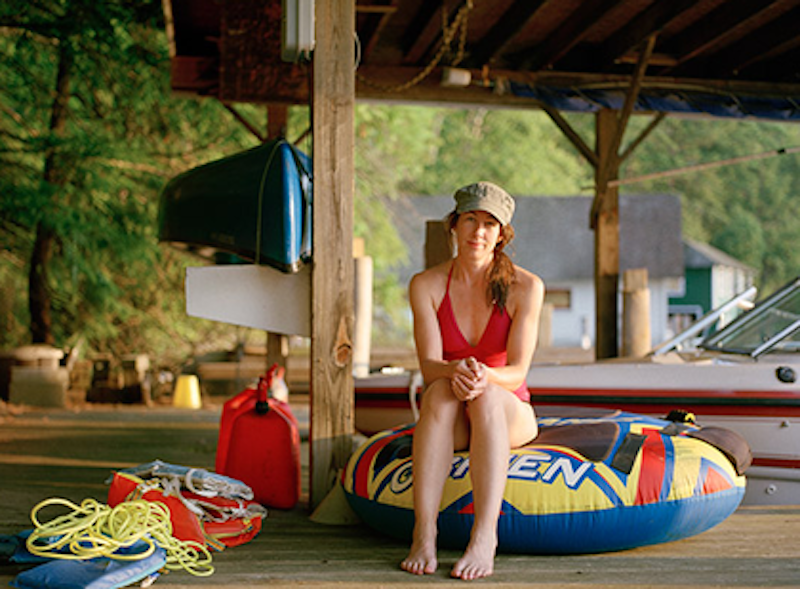 As the title My White Friends says, Greene's album is devoted to photos of her white friends. In one photo, two friends are standing on the porch holding their babies; in another a friend sits in a room with an impressive view. Greene says she was specifically working "to present stereotypes, not create faithful representations." So the pictures are meant to present clichéd images— to show, not individuals, but iconographic whiteness.

In some photos, this comes across clearly. A picture of a guy on his driveway with his gut and his grill fits neatly into images of angry-white-man stereotypes. Similarly, the photo of a woman posing with her golf club and Pink Panther golf bag in front of a golf course fits into stereotypes about white people, poor taste, and golf. The woman's hip-cocked pose and flirtatious crossed-legs also suggests ways in which white women's sexuality is sometimes presented as clueless or a self-parody. White people, at least according to some stereotypes, aren't sexy.

Both the grill guy and the golf woman manage to suggest stereotypes in part through references to lower-middle class leisure time banality. Photos that don't pick up on such class markers, though, are harder to see as stereotypical.  An image of a woman sitting on a sofa surrounded by clutter just looks like a woman sitting on a sofa surrounded by clutter, not as some sort of commentary on the messiness of white people in general.  Similarly, the photo of a woman sitting in a chair with some sort of children's toy off to the side doesn't seem like a stereotype. It just seems like she's a woman who probably has kids. So what?

To some degree, you could see the photos as creating stereotypes simply by insisting on the whiteness of the sitters. Greene has specifically placed these individuals in her lens as representatives of whiteness; as a result, every detail, no matter how neutral, becomes charged, constraining, and, inevitably, insulting. The picture of the woman sitting amidst the clutter, for example, becomes a commentary on white people's messiness, and perhaps (with that Priority Mail box off to the side) on their frantic workaholic obsession. Or this picture becomes about how white people always wear jeans and go to school—how about those jeans-wearing, school-attending white people, huh? In other words, the photos mark white people, so that you notice the sitters as marked, and attribute whatever they wear, or do, or don't do, to their whiteness, just as, in America, black people have traditionally been marked, so whatever they wear (caps or sweatshirts or business suits), or do, or don't do becomes a way to single them out for notice, censure, and discrimination.

What's most marked in the photos, though, is the way that even thought the project demands that you mark the sitters, they still, for the most part, don't end up being marked. You have to work to make that girl standing in a snowy field mean something about whiteness, and even when you do, it's still not especially convincing or visceral. You can make up a story about how the woman with the clutter is a stereotype, but it’s pretty thin. Even when you're trying, whiteness doesn't read as whiteness. It just reads as… well, as nothing.

And that's maybe the real stereotype of whiteness. The essence of whiteness, in America, is that it isn't marked. Whiteness is the default. It has no meaning. The stereotype of white people is that they aren't stereotyped; their race, for the most part, has no effect on who they are as individuals. Even when you point to it, whiteness is invisible. Whiteness, these photos suggest, is the power of not having to live with whiteness. It's the magical ability to make everyone think that, in America, your skin color has nothing to do with who you are.