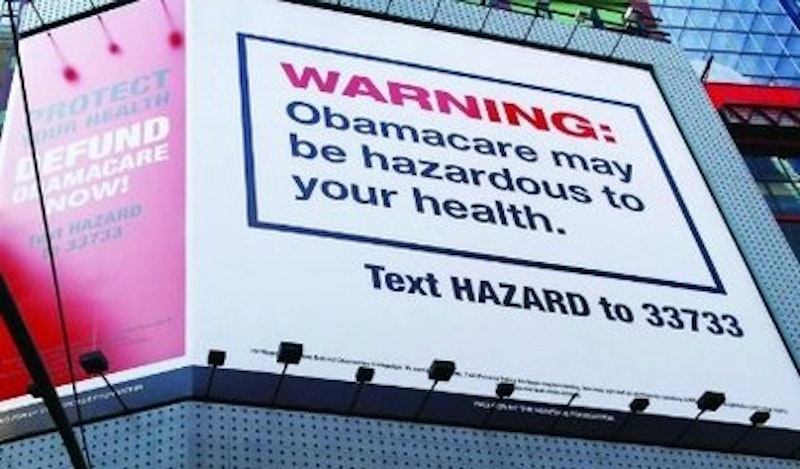 The Hill reports that Republicans have moved to the rear when it comes to Obamacare. No bills to repeal it, no hearings to embarrass it. Why? Well, The Hill says, this silence “highlights the GOP’s struggle to adjust its message now that enrollment in the exchanges beat projections and the uninsured rate is going down. Insurers also report that 80 to 90 percent of new policyholders are paying their premiums, contradicting a frequent criticism from the GOP.”

In others words, the law appears to be working. Of course, insurers might decide to jack up premiums; they decide the rates later this year. If the premiums go up, as they often do, the Republicans can say it's because of Obamacare. And last I heard, it was still possible that some enrollees' information might be garbled when it reached insurers. But so far, so good.

That's the best I can say, and I'm an Obamacare supporter. By contrast, Republican honchos seem so impressed that they've lost heart. For months they've been coming up with dire predictions about Obamacare. After Healthcare.gov's rotten debut and the noise about canceled policies, the predictions kept a drumbeat going, and now (according to polls) most of the public looks on Obamacare as having failed to do what it set out to accomplish. They think this even while the law is just taking effect. Most people don't even know that enrollment came in over projections and not under.

You would think that now Republicans might keep their hand in and make some more predictions. But no. In Congress and at Fox they've decided to talk about other things. I think their hearts are broken. Last fall they fell in love with Healthcare.gov's gorgeous failure to perform. Republicans high and low knew government was a flop, and government did indeed flop, right on the floor in front of everybody. It was a “world is right” moment, like when the lovely object of desire turns his or her eyes at you and smiles deep. The windy talk of liberals is supposed to blow away.

But actual enrollment turned out to be good. Republicans love bright lines and the hard-and-fast, so the eight million figure for enrollees—a full, fat million over projections—must have been tragic. Yes, the Republicans can find new lines of attack. But this was a line of attack that they believed, and it's gone sour. There's nothing like having your dream girl look at you and then look away.

Noonan moment. Peggy Noonan, that perennial tuning fork, consults her vibrations and finds that Barack Obama, in human terms, is just about no good. She does this check quite often, always with the same results. Obama turns out to be a slope-shouldered, mopey fellow who's got quite the opinion of himself but doesn't seem cheered by it. If he's admired, he perks up; otherwise he's listless. He has no spine to keep him in place, just other people's good regard.

There's nothing a man without a center can get excited about, but he may still swing into action when ratification and approval are at stake. Thus, in Noonan's latest, we have: “He is not passive when it comes to his political fortunes—he goes out and speaks and tries to rally the base—but even there, and certainly when it comes to governing, he seems bored, as if operating at a remove.” The start of the sentence marks a departure for her. Late in 2011, Noonan's vibration check indicated that Obama was so without sand that he had given up on reelection and was vacationing in Martha's Vineyard as a way of saying the hell with it. She turned out to be wrong. Now she has accommodated that gap.

Here's a wrinkle I give to her free: Work out a connection between Obama's dispirited need for approval and the way he gets sarcastic with aides. Say that he talks to the public like a man who expects admiration and can't believe that he isn't getting it; he can't believe people think for themselves and have to be persuaded, and he doesn't know this is a task to be done with humor and spirit and a recognition that doesn't get voiced but is always paramount—that we are in this together, that we are piecing together what we know and talking to each other, even if, right now, the politician up there on the stage is the one saying the words.

And so on. It would take you 15 minutes and you'd have half a column right there.