There’s No Reason for Obama to Hate the Media

Most journalists submit meekly to the White House. 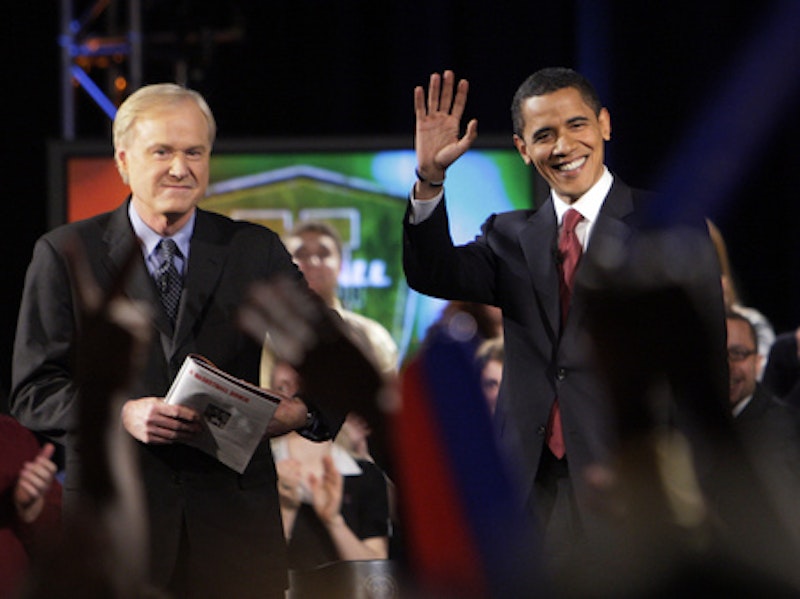 The cultish devotion many members of the media demonstrate toward President Obama is religious in its zeal, and romantic in its passion. From Chris Matthews’ “thrill up the leg” to Newsweek editor Evan Thomas’ statement that the President “stands up above the world—sort of like a God”—the rhetoric of awe has strange spiritual and sexual undertones.

Recent revelations from distinguished investigative reporter, Sharyl Attkisson, formerly of CBS News, demonstrate that the relationship between the President and the press is not an equal partnership or even a happy romance, but an exercise in sadomasochism. Liberals in the media, silently and sometimes happily, take abuse from Obama, and like a brainwashed battered wife, lash out at outsiders who object.

Attkisson gained notoriety in recent years by breaking stories and uncovering secrets that her colleagues routinely ignored or dismissed. She was the first major American journalist to report on the mind-blowing idiocy of Fast and Furious—the Obama administration approved ATF program of running high-powered assault rifles to drug cartel killers in Mexico. The idea, which would qualify for gallows humor if it were not true, was that through the program they could track and monitor the criminal activities of the cartels. The actual result was the deaths of several people, including a US Border Patrolman.

Attkisson also detailed the inconsistencies and incompetence of the Obama administration’s disastrous mishandling of security at the American consulate in Benghazi. She describes facing resistance at every turn, and resigned from her broadcast home of 21 years. One of the reasons she resigned was the “ideological entrenchment” of her managers, who “were sensitive about any story that might appear as though it criticizes the government.”

More important than the political bias of one network is what Attkisson calls the “chilling effect” the Obama administration has had on investigative reporting and the important tradition of tough muckracking as a check and balance on the nefarious ambitions and corrupt activity of governmental leadership.

“There have always been calls from the White House under any administration, when they don’t like a particular story,” Attkisson said in a recent interview. “But it is particularly aggressive under the Obama administration and I think it’s a campaign that’s very well organized, that’s designed to have sort of a chilling effect and to some degree has been somewhat successful…”

It appears that many journalists, who lack Attkisson’s integrity and courage, believe that independent journalism—what many historians refer to as the “fourth branch of government”—is a quaint idea applicable only when someone personally unlikable occupies the Oval Office. Most journalists, and especially those at CBS—silent on the Attkisson discoveries and similar stories—take their beating without complaint.

The allegations of Attkisson follow the 2013 report that Obama’s Justice Department collected the telephone records, monitored the movements, and seized the emails of Fox News’ James Rosen. Shortly after the Rosen scandal broke, the public learned that the Obama administration also spied on several reporters with the Associated Press. The development of a sitting president encroaching upon the Fourth Amendment rights of journalists, in a clear and insidious attempt to subvert the freedom of the press, quickly vanished from the mainline media’s coverage of current events. Most establishment journalists are unwilling to throw a punch even as they are getting pounded into submission.

Newspapers and magazines in China cannot publish their stories until they receive approval from a government official assigned to supervise their offices. Given the restrictive laws of China, those reporters have little choice but to comply. American journalists don’t work under such oppressive conditions. Their voluntary surrender of their liberty, for that reason, is all the more cowardly and shameful.

—David Masciotra is a columnist with The Indianapolis Star. He’s the author of All That We Learned About Living: The Art and Legacy of John Mellencamp (forthcoming, University of Kentucky Press).