Taking the War Out of War Literature 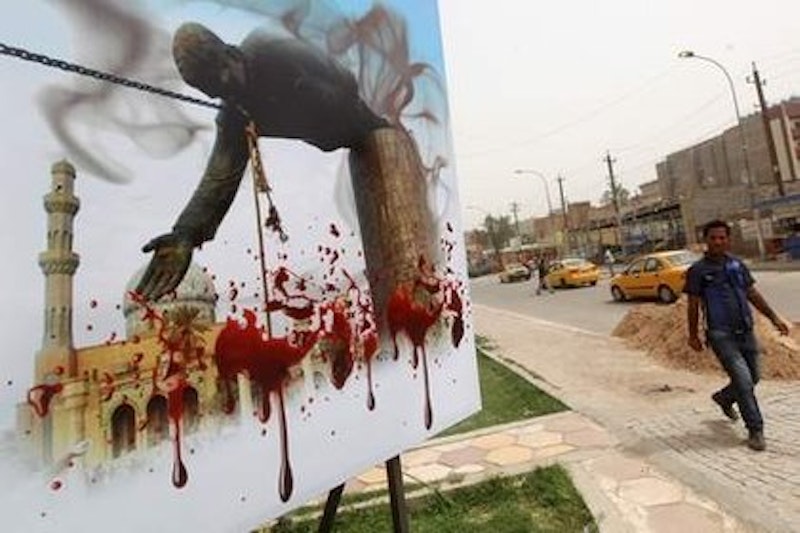 I found Hassan Blasim’s The Corpse Exhibition at Barnes & Noble shelved with 20 other recently released literary novels and short story collections. Five of the 20 were about recent conflicts in Iraq and Afghanistan and another two or three had pictures of men in uniform on the cover. I’m never sure whether to be encouraged or discouraged by the public’s interest in war. Nostalgia worms its way into even the most stolid anti-war diatribes; sentimentality for historical importance undermines the most unflinchingly honest of war reporting. War stories often seem like a rabbit hole where the borders between vilification, mystification and adulation fade, and the harder an author tries to crawl out of that hole, the harder he works to establish some sort of boundary between the good and the bad, between the criminals and the victims, the deeper he finds himself buried.

I think the problem, and perhaps much of the confusion, stems from the use of the word “war.” On its back cover, The Corpse Exhibition is described by Penguin Press as “the first major literary work about the war from an Iraqi perspective.” But, having read Blasim’s collection of stories, I see it’s not really about war at all. Several atrocities and saturation bombing campaigns that politicians and propagandists euphemistically describe as “war” occur in The Corpse Exhibition—the Iraq-Iran conflict (which was called the Gulf War at one time), the Gulf War (which was called the Second Gulf War at one time), and Operation Iraqi Freedom (which Americans call the Second Gulf War now)—but they only serve as background to stories about death. They’re filler, exposition, and hardly encapsulate the story itself, which consists largely of ghosts and corpses telling the story of how they became ghosts and corpses in a world that cares nothing for them. The work is, if anything, a work of history, a history strange and discomfiting to our amnesic and kitsch-befuddled culture, but history nonetheless.

How to best remember the past consumes Blasim. In “Crosswords,” the narrator tells us of his friend who wants to write a “book on the history of decapitation in Mesopotamia.” Only a few lines later that friend is dead, having swallowed razor blades at the behest of another man’s ghost. The ghost driving the original friend to suicide is that of a man who burned to death in front of the one he would later compel to eat razorblades. The ghost of the razorblade eater, the reader discovers in the story’s conclusion, again only a few lines away, now haunts the narrator, and will do so, we are led to believe, until the narrator meets a similarly premature end. The cyclical murders and suicides described are dramatically violent, and war made them possible, but Blasim does not describe war. He describes life. He describes guilt and the impossibility of memory. He describes friendship and ruined possibility. He describes an indifferent heaven and the people who cannot outrun its caprice. This is no more a war story than King Lear is a war story.

Yet the publisher insists we consider Blasim a war writer. His “explosive” (really?) new voice emerges from the “rubble of Iraq,” with words as “haunting as the photos of Abu Ghraib.” The use of Abu Ghraib as a point of comparison is telling. Abu Ghraib haunts nobody except perhaps those tortured there. Americans might every once in a while stare at the pictures on Wikipedia and think “Wow, that was messed up,” but this is not being haunted. Haunted is a ghost that lives with you until you decide to swallow razor blades. Haunted is throwing yourself out a window because the dreams won’t stop coming. Americans, for better or worse, are a nation of hunters; very few among us are haunted. We need to localize evil and kill it (or, rather, forget it), whether it’s ferreted out in inner cities, Islamists, camp-counselors, or PTSD-deranged soldiers. We even have a show about hunting ghosts. But the most effective way to hunt and kill our past is through the idea of war, by swallowing up vast tragedies in the dignified auspices of a three-letter word, a word that excuses even as it horrifies, redeems even as it damns.

The First World War, the literary historian Paul Fussell once said, did not really have any battles to speak of, at least not in the traditional sense, though we still call them battles because it appeals to our romantic assumptions about war. Our great-grandfathers, said the British, had a Waterloo so we need one too. But the Somme and Ypres were not Waterloo. They were mechanized slaughters, indiscriminate and unromantic death factories. Calling them battles ennobles them by acting as if they had the coherency we imagine battles might have. It subsumes millions of forgotten individuals in the web of an idea larger and greater than any individual moment, placeholders in our sense of national self, simultaneously elevating these men’s deaths and dispensing with their humanity. It makes for great drama, a sense of historical meaning. Just say “Battle of the Bulge” to yourself. How can you not help but feel that awful dread of the sublime romantic past, where men were men and died like men? The name, though, might sound a little different, a little less dreamy, to the German and American teenagers who froze to death in the Ardennes.

The same logic applies to wars as a whole. War—whether it’a the Cold War or the Boer War—is shorthand for multiple, dissimilar and sometimes antithetical experiences, a shorthand used to get people to do things and agree to sacrifices they normally would not. The United States’ invasion of Iraq was a traditional “war” for about a month, and it could be argued, as Blasim does so credibly in “The Iraqi Christ,” that such massive one-sided bombing campaigns are nothing but a “cartoon war.” The word war makes sense of an experience that should not be made sense of, transubstantiates murder with the lie of coherency. The flip side of using the word “war” is that when we stop using the word we think the death stops. We are not at war with Yemen; ergo, no one is dying in Yemen. But the corpses continue to proliferate. Whatever it was that was unleashed does not go away with our use or non-use of the word war.

Yet the word gives us our bearings, stars on the horizon of our history. Blasim understands this. In “An Army Newspaper,” one of the strongest stories in the collection, the narrator becomes famous, lauded by the Western world for stories he stole from a soldier on the front lines of the Iraqi-Iranian war. Once he finds out the soldier is dead, he plans to release the stories one at a time  and live off the fat of this other man’s pain. The stories, though, keep coming, big boxes of them in the mail each day, more evidence of his crime. He can’t burn them fast enough. He digs up the corpse and tries to re-kill it. He just needs the war to stop so he can live his lie. But war “did not stop” and “after long and terrifying years” a “new war broke out.” The stories keep coming. “When will this khaki sperm stop?” moans the narrator at the end of the story before he, we’re led to assume, commits suicide.

This is a good question, one especially pressing for a people torn apart by bombs on a daily basis. But a better question for the American writer and reader, those who feel themselves in control of the bombs, is this: do we even want it to stop? Do we like having, as a New York Times reviewer put it in a thoroughly confused military analogy, our war literature in waves—first the journalists, then the veterans and finally the other side? Don’t we enjoy arranging them so neatly into shelves and thinking ourselves so broad-minded and advanced we actually have an enumerated and patterned publishing chronology for our many wars? I think we do and the idea of “war” literature helps us to do this without having to hear what the author has to say about life. The narrator of the “An Army Newspaper” shouts, “Congratulations on being alive!” at the reader when the story opens. Maybe this is all the reader of war literature ever feels: the satisfaction of being the one not dying between the front and back covers.

“The Hole,” another story from Blasim’s collection, opens with a man, the narrator, running from an unidentified war. He almost makes it to the Natural History Museum before falling into a hole inhabited by a jinni. The jinni is horrifying by any standard, Western or Eastern, a bobbly-headed grotesque from the Abbasid Caliphate who mocks the narrator relentlessly. When asked by the narrator if he is with the resistance or the government, the old man shouts back that he is “with his mother’s cunt.” There is a corpse with them, that of a Russian soldier from World War II. The narrator asks how he got there. The old man shrugs his shoulders, crawls over to the corpse and cuts out a piece of flesh to eat. Shuddering, the narrator nibbles on chocolate from his pack and tries to maintain his dignity. By the end of the story, the narrator, still stuck in the hole, is eating chunks of the old man.

As you can see, I bought the book. I paid my couple of dollars toward the memory of all these corpses. Maybe it was because Penguin advertised it so well as a war story. “A new kind of story telling forged in the crucible of war,” concludes the publisher’s blurb. I went to Iraq as an Infantry platoon leader. It’s nice to think of my experiences as a war, so the things that happened there become like so many other wars, something young men have experienced all the way back to the Iliad. It excuses the parts of my war that do not seem like war at all. It transfigures the house break-ins, the police brutality, the bombings, the gangster pay-offs, the stupid patrols I experienced into a shiny series of names—“Fallujah,” “Ramadi,” “The Surge”—for the next generation of little boys and historians to arrange and rearrange and dream about. But we need something to eat in our hole, don’t we? Otherwise we’d starve. And Americans don’t starve. They hunt.