Nothing could be more obvious than the effects of our brainless political polarization on our media behavior. 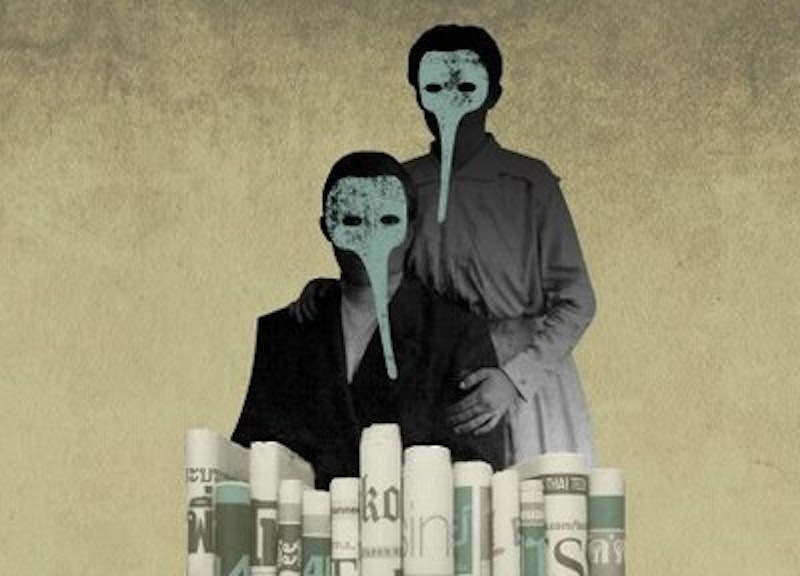 I'm concerned about Russian and other meddling in the American political system. I'd rather not have hostile forces hacking and releasing people's emails, probing voting-machine systems and voter rolls, directing American candidates on foreign policy in exchange for hotel contracts, and so on. But I'm not that worried about Russian advertising on Facebook.

First, “social media” has become a ubiquitous non-explanation for all phenomena, and second, “social media” has become a decade-long amorphous moral panic. What explains world Islamic terrorism? “Social media.” The problems of all teenagers in the world, and the decline of our youth? It's Instagram, I guess. Now leftists and “experts” want to blame SM for the election of Donald Trump. They want to spend the next couple of years raking Mark Zuckerberg over the coals. Really, they're just pounding out the very messages and making the same moral mistakes (call them collectively by the name “elitism”) that did, in fact, lose them the election.

Let me ask you who are bemoaning the fact that some voters in Wisconsin were “exposed to” messages such as SATAN: "IF I WIN CLINTON WINS": are you concerned that you were successfully manipulated by Russian memes? Or do you think that, in an environment where you have very many possible sources of information and are constantly bombarded, you could’ve been? For example, let's say your news feed the night before the election featured accusations that Hillary Clinton was a murderer. Do you think that could’ve made you vote for Trump?

None of the punditocracy, or the professoriate, for example, is concerned about their own sources of information, or their own manipulability, though they ought to be. They’re concerned about the great unwashed, the ignorant, manipulated dolts who populate flyover America. The fact that these people are dolts is shown by their political disagreement with New York Times columnists, MSNBC hosts, and psychology professors. The experts demand the implementation of greater controls over the flow of information to these chumps, whether it's through prescribing pre-school curricula or editing their Twitter feeds.

How to control the information available to "working-class white people" has been the dominant theme of lefty self-reflection on their election loss, or rather the dominant theme of their prodigious efforts to avoid self-reflection. One form of their sneering concern on behalf of their opponents is the ubiquitous trope of the “post-truth era.” The post-truth era is without gatekeepers, an era in which the quasi-progressive technocracy has lost control of the information flow. On the other hand, it never had control in the first place.

When people start talking about the “post-truth era,” they mean an era in which they’re aware of the truth, but in which their opponents believe a bunch of bullshit. They’re engaged in historiographical periodization or metaphysics or sociology; they're simply hurling insults. Or rather, this whole brand of discourse is aimed above all at self-congratulation, which might be termed the God of American technocratic leftism. Perhaps that's unfair; after all, it's also the God of the left in the UK.

We all basically understand how Americans consume advertising and social media feeds, categories which substantially overlap. We see hundreds or thousands of items every day. Our obvious default is to skip right over them, or to cock a cynical eyebrow at them. If we responded much to most stuff like that, we’d never do anything else. Perhaps you've seen ads for Xarelto dozens of times. Closer to trying to buy some? It's the same in rural Michigan. If there's one thing that Americans understand, it's advertising.

Furthermore, nothing could be more obvious than the effects of our brainless political polarization on our media behavior; everybody wants to see whatever confirms them in their group membership, especially expressions of hatred for the other side. It's not even that you necessarily believe a particular rumor or wild “news” story, for example, but you gleefully pass it on because of its community-building effect. Indeed, memes for the most part are neither true nor false, just nasty or funny juxtapositions of words and images, like political cartoons though that thing about Satan and Hillary has a certain plausibility.

We hardly need the FSB to create divisive memes, and I'd like to know what tiny percentage of such things, circulating around election time, emerged from foreign propaganda operations. For God's sake this is quite the same on both sides, only Democratic types don't appear to see that about themselves. Before you come to us trying to heal society with condescension, I prescribe a decade of withering self-reflection.

At any rate, when the experts and the columnists start describing how they were also manipulated into a change of views or voting habits by nasty memes, then I’ll take them seriously. Really, it's an application of the golden rule; you might extend to others your account of yourself; you might want to try to take each of them as seriously as you take yourself as a thinking human being. If you don’t, you can hardly expect them to listen to you, or indeed not to despise you right back.