Republicans continue to make hay out of any and every point of resentment in the American lexicon. Racism, sexism, taxes, music, culture—everything is fair game when, after kicking out fair-minded moderates, you’re left with only anger and shame as your potent political weapons. 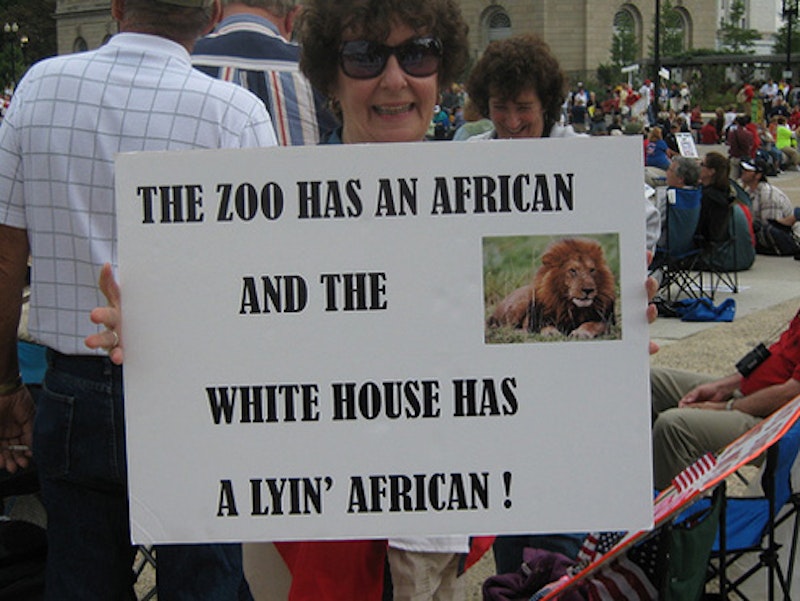 What Nixon did—and what Ailes does today in the age of Obama—is unravel and rewire one of the most powerful of human emotions: shame. He takes the shame of people who feel that they are being looked down on, and he mobilizes it for political purposes. Roger Ailes is a direct link between the Nixonian politics of resentment and Sarah Palin’s politics of resentment. He’s the golden thread. —Rick Perlstein

White conservatives have developed the belief that being called a racist is a slur on par with actual, proper racial slurs. They also tend to think that amorphous anti-white prejudice is a big problem; it is, in their thinking, perhaps a bigger problem than anti-black prejudice. Many of them also have a very simple, binary understanding of the concept of "racism." You're either a racist—an epithet-shouting Klan member—or you're not. This is why, say, Andrew Breitbart says that unless there is video evidence of Tea Partyers explicitly saying "nigger," there is no "proof" that racial resentments have anything to do with right-wing white populism. —Alex Pareene

As of now, President Obama is enjoying better poll numbers than his 80s counterpart and shiny icon of everything awesome, Ronald Reagan, thanks in part to an uptick in support from Republicans, of all people. It’d be nice to assume this is the case because the President brought to fruition a certain type of health care reform repeatedly and vehemently championed by Republicans in the Dark Ages (the 1990s) and is, by all accounts, neither a raging liberal nor a raging socialist, but a solid moderate. There is little to no coherence from the Right, whether you’re looking in The Wall Street Journal’s spittle-flecked op-ed pages, on Fox News, or listening in on the radio waves. You can get some measure of honest debate from Paul Ryan’s plan to privatize Medicare—the savings from which will fund a massive tax cut for the rich (a plan which, depressingly, has been explained to Congressional Republicans by way of sock puppets—a blatant call for more PBS funding, obvs).

The only coherence I can see is one of cultural and social grievance—the notion that somehow, somewhere, the policies championed by Obama and the Democratic Party are a form of class warfare; a form of “other”; a form of disenfranchising a historically franchised white population.

It’s depressing, really. The blow-up over Common’s appearance at the White House; the Shirley Sherrod travesty of a controversy; Newt Gingrich’s new favorite line: Obama is the nation’s “biggest food stamp president”; the collective howl that any sort of “revenue enhancement,” public investment, or tax hike is somehow a war on the rich.

US tax rates are low. Really low. So low, in fact, that what we have now is a regressive tax structure: poor people pay a higher percentage of taxes than do rich people. And yet any suggestion that we, say, undo the unpaid-for Bush tax cuts is met with wide-eyed hostility, as if some bureaucrat from the Fed is knocking on doors and punching rich in people in the mouth just cuz. See here for a good example of this kind of tantrum throwing, and then check out this simple little chart.

There’s another way to look at this. The Right loves to paint the Left as guilt-ridden Marxists who love them some social engineering at the cost of unfettered free markets and the American Way of Life. Cue Portland (about as white and liberal as a big city can get):

In its first-ever audit to test whether black and Latino renters face barriers in the housing market, Portland found that landlords and leasing agents discriminated in 64 percent of 50 tests across the city.

But Portland, which released the results last month, has not gone after the landlords who discriminated or even notified them they were tested, though such discrimination violates local, state and federal fair-housing laws.

See, this is a good item to keep in mind when considering why the Democratic Party is so gosh-darned sensitive to issues of race and ethnicity and discrimination: they all occur in real time, with real people of all geopolitical stripes, with real consequences; the Right has little to no response to systemic discrimination. Indeed, affirmative action, Pigford v Glickman (the Shirley Sherrod sham), mandatory minimums and illegal immigration are seen as anti-anti-racist jeremiads that white conservatives cower behind lest some hack call him or her a racist. It’s pathos with real-world implications (as well as ample fodder for The Daily Show-Colbert set). You see it again and again when some columnist proudly thumps his or her chest and claims that Obama was elected because he was black, and then dares anyone to counter with the race card, or when Ron or Rand Paul goes on the record saying he would vote against the Civil Rights Act.

The Right pushes its thumb straight into the running sore of racial grievance. The white working class is now the most pessimistic of all socioeconomic strata:

By contrast, although it is difficult to precisely quantify, the sense of being eclipsed demographically is almost certainly compounding the white working class's fear of losing ground economically. That huge bloc of Americans increasingly feels itself left behind—and lacks faith that either government or business cares much about its plight. Under these pressures, non-college whites are now experiencing rates of out-of-wedlock birth and single parenthood approaching the levels that triggered worries about the black family a generation ago. Alarm bells should be ringing now about the social and economic trends in the battered white working class and the piercing cry of distress rising from this latest survey.

Those single parents and out-of-wedlock births are cropping up in, surprise, the same states that cut funding for Planned Parenthood and look to circumvent Roe v Wade with draconian laws. Such is the way of the cognitively dissonant Republican Party, which apparently also believes that "[Sesame Street]   is a direct assault on this country's moral foundation."

Using simple definitions, conservatism concerns the preserving of established institutions, whether they’re free markets, heterosexual marriage, or the absence of environmental regulations. Systemic discrimination and racism, an American institution since the drafting of the Constitution, is one such established American trope that needs less defense, more light, more progress, and the Right is anything but ready, or mature enough, to tackle that challenge.