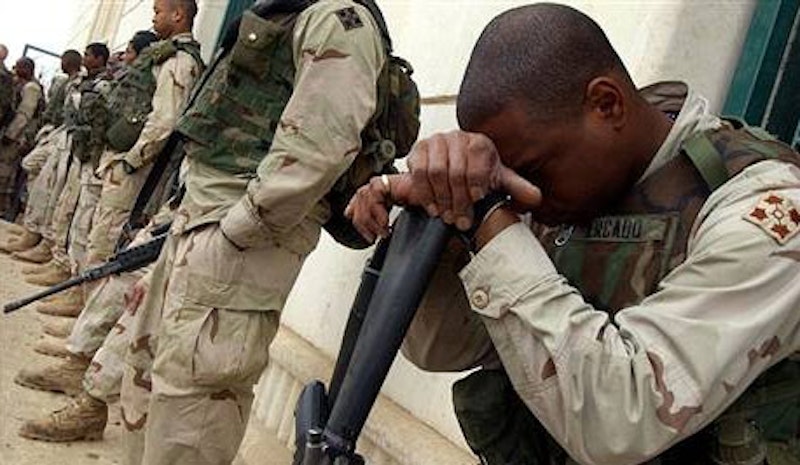 Collateral Damage: America’s War Against Iraqi Civilians, by Chris Hedges and Laila Al-Arian, depicts the horrors and death that naturally go along with occupation. In vivid detail, this small expose reveals what is so often hidden from public view—murder, brutality, torture and terror. Through interviews with veterans, Collateral Damage explains how the war has gone horribly wrong and unleashed a campaign that has irreparably ruined innumerable lives. The book is divided into five chapters, the first four of which discuss different sources of deadly conflict between U.S. soldiers and ordinary Iraqis: convoys, checkpoints, raids and detention.

The convoys are “ubiquitous in Iraq. They usually consist of 20-30 trucks and military escort vehicles that can extend for as long as a mile.” They are “the arteries that sustain the occupation. They ferry water, mail, maintenance parts, sewage, fuel and food to bases across Iraq.” Soldiers must protect these convoys, which are susceptible to IED’s and ambushes. As such they travel at a rapid pace and never stop, not even if children get in their way. It’s a matter of survival. If any Iraqi drivers get close, as often occurs, the troops fire at them with impunity.

“Every time we got on the highway,” Sgt. Patrick Campbell said, “we were firing warning shots, causing accidents all the time. Cars screeching to a stop, going into the other intersection… The problem is, if you slow down at an intersection more than once, that’s where the next bomb is going to be, because you know they watch…  that involves added risk to all the cars around you, all the civilian cars.” Sgt. Campbell describes “the first Iraqi I saw killed.” The man was driving down the highway as the convoy was going up on a ramp in Baghdad when the soldiers fired warning shots. The driver didn’t stop because he didn’t see them, as was later revealed. Sgt. Campbell recalls “holding this man’s brain in my hand” after troops shot him twenty times. Tragedies of this variety are routine.

Checkpoints are perhaps even more fatal than convoys: “Veterans said the shooting of civilians at checkpoints was so frequent it ceased to be regarded as unusual.” Because of this they almost invariably go uninvestigated, and “there are no estimates of civilian deaths at checkpoints, but these veterans said it ran into the hundreds of thousands.” Checkpoints are so dangerous because they are all over Iraq and difficult for Iraqis to detect. They often go up in locations that did not contain checkpoints the day before and are not well marked. This leads to almost daily accidents and atrocities because Iraqis often do not realize that they have approached a checkpoint until it is too late.

The confusion is further compounded by the language barrier, as the army suffers from a gaping dearth of interpreters: “the soldiers think they’re saying ‘stop, stop,’ and the Iraqis think they’re saying ‘come here, come here.’ And the soldiers start hollering, so they try to come faster. So soldiers holler more, and pretty soon you’re shooting pregnant women,” as Sgt. Jeffries puts it. Worst of all is the utter futility of the procedure, which is supposed to weaken the insurgency by uncovering insurgents and weapons: “In all the checkpoints I did,’ said Sgt. Westphal, ‘and again, must have been hundreds—I never, not even once, found anybody with anything they weren’t supposed to have.”

Raids, to which tens of thousands of Iraqis have been subjected, are almost equally counterproductive: “veterans said that no more than 10 percent of all the raids they conducted turned up contraband material.” They are usually carried out based on flawed intelligence—an Iraqi who tells them his neighbor is an insurgent to settle a personal score unrelated to the insurgency, for example. The process, as described by Sgt. John Bruhns, who raided roughly a thousand homes, is horrifying:

You run in… You go up the stairs. You grab the man of the house. You rip him out of bed in front of his wife. You put him up against the wall… Specialists will run into the other rooms and grab the family, and you’ll group them all together. Then you go into a room and you tear the room to shreds and you make sure there’s no weapons or anything that they can use to attack us. You get the interpreter and you get the man of the home, and you have him at gunpoint, and you’ll ask the interpreter to ask him: "do you have any weapons? Do you have any anti-U.S. propaganda"… Normally they’ll say no, because that’s normally the truth… So what you’ll do is, you’ll take his sofa cushions and you’ll dump them. If he has a couch, you’ll turn the couch upside down. You’ll go into the fridge, if he has a fridge, and you’ll throw everything on the floor, and you’ll take his drawers and you’ll dump them… You’ll open up his closet and you’ll throw all the cloths on the floor and basically leave his house looking like a hurricane just hit it. And if you find something then you’ll detain him. If not, you’ll say, "sorry to disturb you. Have a nice evening"… And then you go right next door and you do the same thing in a hundred homes.

During the raids entire villages are blocked off and no Iraqis are allowed to leave. The procedure is totally counterproductive because, as Sgt. Bruhns adds, “next week, ten roadside bombs go off. Instead of one attack on American troops, twenty attacks on American troops happen. And nobody can understand why.” Furthermore, arrests are usually arbitrary and public. Many Iraqis don’t realize they are violating a military-imposed curfew and get locked up. First Sgt. Jeffries explains that one day he might be told to “pick up everybody with a machine gun. Tomorrow you get told to let them all go. So this kept the populace—they never knew what rule we were following,” the classic characteristic of a totalitarian system. And arrests were generally public humiliations because, as Jeffries points out, “you’re dealing with a city and whole bunch of people watching…  It almost always turns into a crowd situation.”

Those who are detained, between 60,00 and 120,00 as of 2008, suffer a miserable fate—torture with little oversight, held indefinitely in a hopelessly unorganized bureaucracy, and no visits from family either because of an outright prohibition or because detention centers are too far away. Army Maj. Gen. John Batiste testified in 2006 about Abu Ghraib “probably 99 percent of those people were guilty of absolutely nothing, but the way we treated them, the way we abused them, turned them against the effort in Iraq forever.” Spc. Patrick Resta was told by his supervisor that “the Geneva Conventions don’t exist at all in Iraq.”

Spc. Richard Murphy knew that nearly every prisoner he oversaw was innocent, and they often asked him to help them get released, placing him in an ominous position. His “attempts to intervene through the Judge Advocate General Corps office were usually fruitless. The JAG officer said it was out of his hands. ‘He would make his recommendations, and he’d have to send it up to the next higher command… It was just a snail’s crawling process… The system wasn’t working.”

Collateral Damage illustrates how the war has been hopelessly lost for a long time, despite the media’s attempt to dress it up as a victory, because the people of Iraq detest the occupation, and the U.S.-trained Iraqi security force is infested with insurgents. Our troops are not bad people. They are soldiers doing what they must in a war zone. Like the rest of us, they were lied to by Washington about the need to invade out of self-defense. But they have to suffer the irreparable physical and psychological wounds that come with occupying a foreign country.

The true nature of the war is utterly lost on most Americans. A conservative Republican I know once encountered an Iraqi refugee who lambasted Bush as a tyrant who has destroyed his country. The man lost friends, relatives, and his home. But these protests were met with anger and disgust: “You don’t deserve democracy,” and “How dare you criticize Bush,” was the reply. Only someone who has been thoroughly brainwashed could make such a grossly disgusting and insensitive statement, which is evidence of the power of Western propaganda.

The awful truth is that the people of Iraq are caught in the middle of a horrific wave of sectarian violence (which may flare up in more deadly form than the darkest periods of the war), death squads, corrupt leaders and occupation. The very nature of occupation makes it impossible for soldiers to view civilians as human because the chaos and danger creates an atmosphere of kill or be killed. As frustration mounts and troops see their buddies get blown up and shot, they unleash their anger on civilians who happen to be in their path.