Palin is the ultimate embarassment in a series of Republican disappointments. 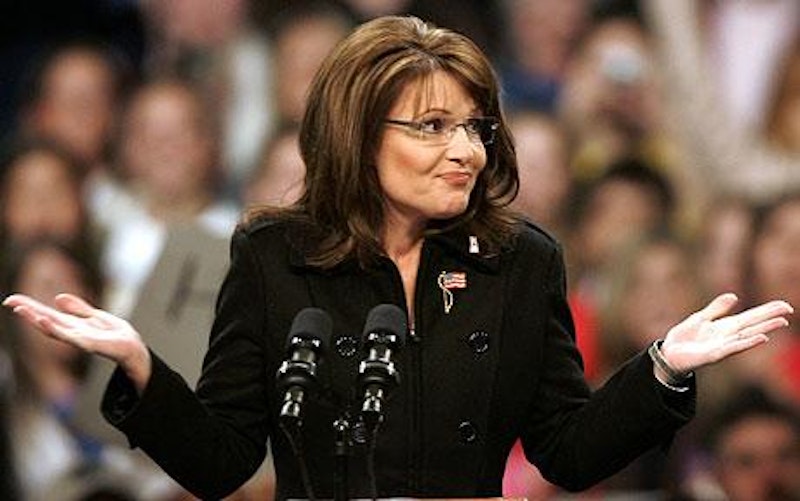 As Sarah Palin backs her bus over Paul Revere in order to alert the British, it’s hard as a progressive not to indulge in a kind of awe-struck, maniacal glee. The Republicans, it seems, are doing it again. Obama fails to get the country out of economic neutral, invades Libya, and leads the Democrats to a brutal midterm defeat—and then leans back as the Republicans noisily and embarrassingly immolate themselves. All that’s left is for Michele Bachmann to beat Newt Gingrich to death with Paul Ryan’s earnest eyeballs live on Fox.

So, yes, the syrup is flowing thicker than Santorum. Which utterly unelectable loon will the GOP pick? Bachmann? Cain? If they scorn Palin, will she (oh please! oh please!) run as an independent? Could we really be witnessing the final, spectacular implosion of the Republican Party?

Through the enthusiasm though, there shines a pale glimmer of doubt. Don’t get me wrong; the Republicans and their collective obstructionist homophobic asses richly deserve eradication. But I’m a little worried about the fallout. The worst scenario, of course, is that the Republicans nominate Palin—and the economy tanks, and she actually wins. The odds of this are quite small. Say what you will about the American electorate, it has stated in poll after poll that it wants nothing to do with Sarah or her reality show. Still, any chance of a Palin presidency is too much of a chance. And the same goes for a Bachmann presidency, a Santorum presidency, a Cain presidency, or a Gingrich presidency. These are all radical, vicious, and/or unqualified people who I want nowhere near a nuclear button. Having a major party flirt with any of them, however idly, is terrifying.

Even getting past the doomsday scenarios, though, it’s just not ideal, from a progressive standpoint—or, hell, from an American standpoint—to have the right wing party go completely batshit. Oh, sure, you may win an election or two. You may see policies you dislike  (like invading Iraq, say) discredited, and some policies you like (such as health care reform) implemented.

But the downside is that, with the Republican Party spiraling into the hole in its own skull, sane people only have one choice at the polls. Which means that when the Democrats hand you shit, as is their wont, you have to eat it.

This isn’t to particularly condemn Obama, who, as far as politicians go, I like well enough. He gives a good speech, does not appear to be corrupt, and shares at least some of my broad policy goals. But while I generally support him, he’s still done a lot of things I don’t like. He invaded Libya. His civil liberties record is dreadful. His drug war policy has gotten steadily worse. His approach to the economy has been way too timid.

Too bad we don’t have a functional Republican Party that does what opposition parties are supposed to do and actually, say, challenge controversial and stupid policies put forward by the incumbent. Perhaps this fictional, non-crazy Republican Party could express mildly effective dissent when the President goes to war without notifying Congress. Maybe it could make Obama’s paranoid centralization of power a campaign issue. Maybe it could make a good faith effort to debate the implementation and functioning of the Affordable Care Act, which could certainly stand to see some good faith debate and adjustment.

Instead, though, what have we had so far? Birth certificates, Paul Revere, and Mitt Romney pretending he don’t know nothin’ bout health care. The chance that Palin will get elected is negligible; the chance that Obama will get re-elected without having to actually substantively defend his record is much, much higher.

Maybe I’m being too gloomy. Maybe the Republicans will get their act together and nominate Romney or Pawlenty or (dare to dream) Gary Johnson, and Obama will actually be forced to talk about something other than the fact that his opponent is a dangerous lunatic. Anything is possible. But if there’s one thing the Republicans have proved over the last few years, it’s that, whatever the adversity, whatever the incentive, whatever the circumstances, they are always ready to stand tall, salute the flag, and disappoint.