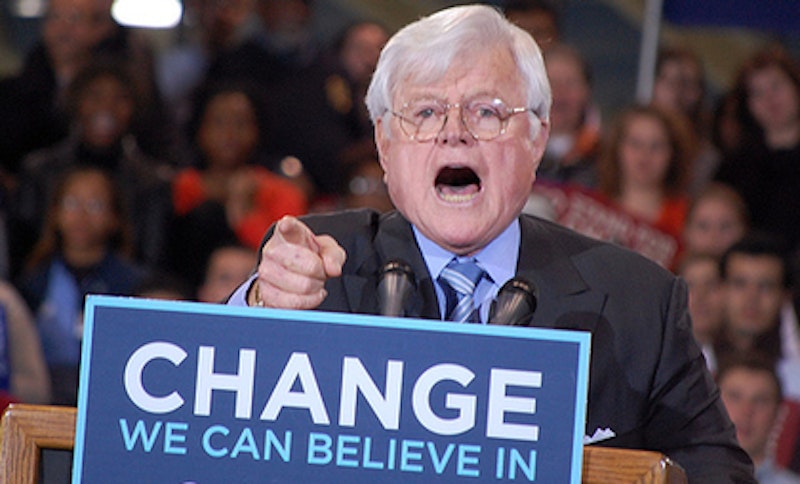 Pardon the following lapse of manners, for it’s rather unseemly to write or speak critically of the terminally ill (especially on the 40th anniversary of Bobby Kennedy’s death), but the outpouring of media and political grief following Sen. Ted Kennedy’s diagnosis of brain cancer last month has me rather perplexed. Yes, it’s grim news for Kennedy’s wife, children and relatives, but let’s be honest: the man is 76 years old (a hard 76, I might add) and has led a long, privileged and exciting life. His imminent death—despite all the nonsense about his “fighting spirit” it’s not likely he’ll be alive for Barack Obama’s inauguration parties—is the natural conclusion for a man who was born in 1932. Most objective people would say he’s had a pretty good run.

When the severity of Kennedy’s condition was made public earlier this month, Sen. Patrick Leahy said, “I’m having a hard time remembering a day in my 34 years here I’ve felt so sadly.” No undue disrespect intended to the Vermont windbag, but if his memory is so faulty he ought to make a doctor’s appointment post haste. Are the events of Sept. 11, 2001 now so distant that Leahy actually feels worse about an elderly friend’s medical predicament than the nearly 3000 people, of all ages, who perished on that day? Was that not the “saddest” day in recent memory, not only in Washington, D.C. and New York but across the country as well? While I don’t think Leahy, among others who are “shocked” by the latest Kennedy “tragedy”—since when is tragic when a person of that age dies?—was intentionally callous, for that’s what his statement was, it sure ticks me off. One can only imagine how the relatives of the innocent Americans who were killed on 9/11 might feel if they came across Leahy’s comment. Likewise, you’d think Leahy, a vociferous critic of the Iraq war, would feel just as “sad” every time a young man or woman is killed in combat.

Bloomberg’s Albert Hunt—once the token liberal columnist at The Wall Street Journal and a regular on television’s The Capital Gang—was typical in his fulsome, grossly exaggerated pre-obituary of Kennedy in a sickening article published on May 26. He begins: “Edward M. Kennedy is the most gifted legislator, and one of the best politicians and most exuberant public servants I have known in my almost four decades of covering Washington and politics. Historians will rank him with Daniel Webster, Henry Clay, Robert Taft and John C. Calhoun as a giant of the Senate… He is and will be the gold standard of excellence in the Senate.”

Waiter, reality check please? It’s not until the 15th paragraph of Hunt’s article that he mentions, in cruel passing, what many people think of first when Ted Kennedy’s name is mentioned. “There remain legions of Kennedy haters, some of whom resent his liberal politics, and others who can never forgive his behavior at Chappaquiddick in 1969 when a young woman died.” Hunt can’t bring himself to even mention the name of that 29-year-old “young woman,” Mary Jo Kopechne, who perished when the car Kennedy was driving veered off the Dike Bridge between Chappaquiddick Island and Martha’s Vineyard.

Kennedy, who didn’t report the accident to local authorities until the following day, received a two-month suspended sentence for his actions. Because of the family’s immense popularity in Massachusetts—and obviously the recent assassinations of his brothers Jack and Bobby—Kennedy wasn’t forced to resign. It’s inconceivable today, with the massive, instantaneous communications industry, that he would’ve politically survived such an immense scandal. By the same token, President Kennedy, with his blatant promiscuity, concealed illnesses, connections with the mob and fundraising procedures—bags of cash exchanged at airports—was also the product of a clubby Washington culture that wasn’t so far removed from Boss Tweed.

Yet Ted Kennedy’s blemishes, to be charitable, didn’t start and end with Chappaquiddick. Hunt continues (in fairness, I could’ve picked out a dozen similar pieces), “Yet when it comes to character and personal generosity, few measure up to Kennedy. As the sole surviving son of the fabled family, he has been a parent to, in addition to his own three children, the 13 kids of his slain brothers; other nieces and nephews, some considerably successful on their own, worship him.”

I could be wrong, but it’s probably safe to assume that the Senator’s nephew, William Kennedy Smith, doesn’t unconditionally “worship” his uncle. It was back in 1991 when Smith, accompanied by Kennedy and his son Patrick, spent time knocking back drinks at Palm Beach’s Au Bar; Smith, then 30, picked up a 29-year-old woman and the four of them retreated to a family-owned house. Patricia Bowman, the object of Smith’s affections, subsequently accused him of rape, although he was acquitted of all charges at a well-publicized criminal trial later that year. Ted Kennedy was divorced at the time—GQ ran a scathing profile of him a year earlier that detailed his sexual adventures in Washington, often accompanied by buddy Sen. Christopher Dodd—and an object of ridicule not only for his carousing but yo-yo weight losses and gains.

It’s worth a look back at the late Michael Kelly’s GQ piece about Kennedy that, at the time, was a sensation in the print media world, for Kelly had broken the rules in his condemnation of a member of the revered clan. This brief excerpt is plenty damning: “The Kennedy brothers always perpetuated their own glorious images, but over the years the last brother has built an image—not glorious at all—of his very own. For his hard public drinking, his obsessive womanizing and his frequent boorishness, he has become a late-century legend, Teddy the Terrible, the Kennedy Untrammeled. In Washington, it sometimes seems as if everyone knows someone who has slept with Kennedy, been invited to sleep with Kennedy, seen Kennedy drunk, been insulted by Kennedy.”

Apologists claim, alternately, that after Kennedy lost his ’80 primary race against President Carter, he hunkered down to the business of Senate, or that his remarriage in ’92 settled him down. I find the former just silly and the latter conceivable, but still, a complete portrait was not written about the man. Chris Smith, for example, in an otherwise engaging New York piece about Barack Obama’s potential misreading of his supposed restoration of Camelot, still called Kennedy’s diagnosis “stunning news.”

A lot has been written about Kennedy’s commitment to health care reform and I don’t doubt that’s a heartfelt goal of his. Earlier this month, the Senator’s tumor was removed at Duke University Medical Center and he’s now on a course of aggressive chemotherapy and radiation treatment, and it’s possible, through new and expensive drugs his life may be extended by a few years. Had Kennedy thought about it, he might have impersonated Charles Dickens’ legendary character Sydney Carton, and, as a last act of his life, chosen a young and poor cancer patient and given him or her access to the care he received at Duke. It would’ve been a deed of redemption—and the ultimate confirmation of his dedication to the issue of health care—to sacrifice his own life to help someone far less fortunate than him.

Returning to 1991, at the contentious Judiciary Committee hearings over President Bush’s Supreme Court nomination of Clarence Thomas—where Anita Hill accused Thomas of sexual harassment—Kennedy, supposedly a champion of women’s rights, was noticeably mute. Journalist Anna Quindlen, then with The New York Times, wrote that Kennedy “let us down because he had to; he was muzzled by the facts of his life.” And The Boston Globe, a steadfast ally of Kennedy, editorialized that his “reputation as a womanizer made him an inappropriate and non-credible” leader in the bid to scuttle the conservative Thomas’ nomination.

That wasn’t the case, however, in 1987, when Kennedy was brutal and demagogic in his attacks on Ronald Reagan’s own Supreme Court nominee, Robert Bork—so much so that the term “Borking” became part of part of Washington’s lexicon. It’s true that Bork was, and is, conservative, but Kennedy, who today is hailed as the ultimate Senate conciliator, a man who can work with Democrats and Republicans alike, was a madman on a mission. In a quote that ought to be taught in all high schools and colleges, public and private, if only to slightly balance the Camelot mythology that persists to this day, Kennedy thundered: “Robert Bork’s America is a land in which women would be forced into back-alley abortions, blacks would sit at segregated lunch counters, rogue police could break down citizens’ doors in midnight raids, schoolchildren could not be taught about evolution, writers and artists could be censored at the whim of the government, and doors of the federal courts would be shut on the fingers of millions of citizens.”

This filth came from the mouth of the man commonly referred to as the “liberal lion” of the Senate (a grossly grandiose compliment conferred upon him long before his current cancer diagnosis). Kennedy, without the aid of a speechwriter (not unlike George W. Bush) has never been known for his extemporaneous rhetoric, let alone speaking in complete sentences—as his infamous 1979 interview with Roger Mudd, in which he couldn’t articulate why he wanted to be president, amply demonstrated—so maybe the above bit of paranoid and delusional character assassination was the handiwork of an acolyte such as speechwriter Robert Shrum, but that’s no excuse. Really, did Kennedy actually believe that Bork’s elevation to the Supreme Court would lead to, among the other charges, of “blacks sit[ting] at segregated lunch counters”? Of course not, although were it not for his own personal scandals, it’s a given that Clarence Thomas would’ve received the same treatment in ’91 and probably not be on the Court today.

Two weeks ago The Harvard Crimson ran an editorial beseeching the school’s administration to award Kennedy a “doctorate honoris causa” at this year’s commencement. The authors are concerned that since Kennedy may not live to receive an honorary degree next year—such recognition is not conferred posthumously at Harvard—this may be his last chance. “As one of the University’s most distinguished sons and actively engaged alumni,” the editorial continues, “Senator Kennedy has touched the lives of numerous undergraduates, graduate students, faculty, and staff.”

However, there’s probably good reason that the school’s vetting committee for honorary degrees isn’t as keen on this idea as the Crimson writers. Kennedy was expelled from Harvard for cheating—after serving in the army for two years he was readmitted—a story The Boston Globe discovered in 1962 when he was running for his brother’s Massachusetts senate seat at the age of 30. According to Richard Reeves’ book President Kennedy: Profile of Power, JFK “negotiated” with the Globe’s Washington bureau chief about the how the story should be handled. JFK joked at the time, “We haven’t spent as much fucking time on anything since Cuba.” Reeves, a traditional liberal, continues: “The President and the bureau chief worked out a statement, which Edward Kennedy repeated in a staged interview, admitting that another student had taken a freshman Spanish exam for him.” Subsequently, the Globe then ran a “gentle” story about the “Harvard incident.”

The late Texas Gov. Ann Richards once famously said about the first President Bush, “Poor George. He was born on third base and thinks he hit a triple.” Maybe so, but Bush has nothing on Teddy Kennedy when it comes to the extraordinary perks of wealth, power and fame. I’m not saying Kennedy’s achieved nothing in the Senate—his immigration reform stance, for example, is important, especially today when the country is in a protectionist mode—but as the formal glowing obituaries are being written right now, it’s important to remember that this political celebrity has had, at best, an extremely checkered career.

An earlier version of this article appeared in New York Press.