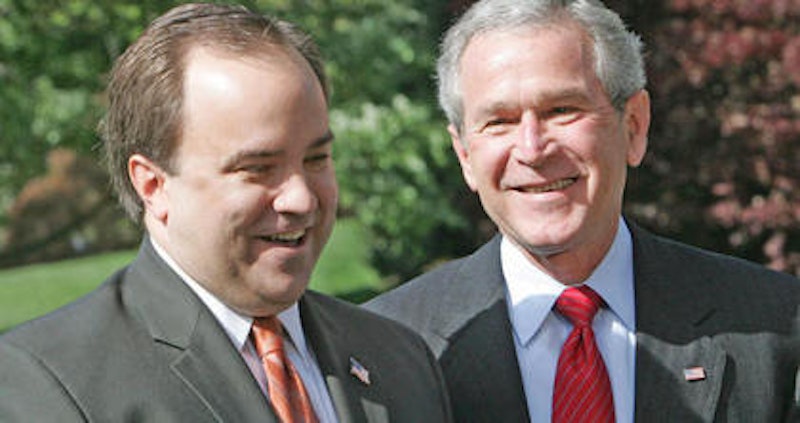 Last week, the mainstream media breathlessly reported that President Bush’s former press secretary, Scott McClellan, had “slammed,” “walloped,” “stunned” or “blindsided”—pick your cliché—the Bush Administration with the claims he makes in his forthcoming book, What Happened: Inside the Bush White House and Washington’s Culture of Deception.

I have to hand it to him, for someone enjoying his fleeting notoriety, McClellan has made the most of it. I saw him on NBC’s Today Show, CNN’s The Situation Room, CNN’s Anderson Cooper 360, MSNBC’s Countdown with Keith Olbermann, the CBS Evening News, ABC’s World News and NBC’s Meet the Press and I’m sure there were other appearances I missed and perhaps more yet to come. In watching his various interviews, I came away decidedly unimpressed, although I always felt he was a horrendous press secretary, so a change in opinion was unlikely. Yet my distaste for him and the book can’t entirely be chalked up to my support for his former boss. In fact, I don’t think McClellan is a particularly popular person anywhere right now—regardless of one’s view of President Bush or general political leanings.

For those who support President Bush, McClellan is a disloyal loser clearly capitalizing (literally) on his powerful former position and the media’s appetite for blood when it comes to criticism of Bush. McClellan’s no fool, and he knew very well the frenzy his “revelations” would ignite, and surely hoped it would translate into book sales. In today’s nonstop news cycle, a failed messenger was a crippling weakness for the White House. More to the point, I have my doubts about the sincerity of his current claims, particularly when he admits that he never once voiced any concerns about what was going on around him to President Bush or anyone else in the White House while they were happening. Furthermore, while he officially resigned, most of Washington knew that his resignation was hardly voluntary, particularly when his successor was the far more talented and respected Tony Snow. No wonder he’s bitter.

On the opposite end are those who despise President Bush or who are vehemently opposed to the U.S. presence in Iraq (or both). Here too lies one of the most ironic aspects of this whole episode, as it was the same liberal crowd now fighting to interview McClellan who once hounded him at the White House podium and very openly derided his lame attempts at “spin.” But things have changed, and McClellan has received an entirely different and more positive reaction—at least initially—from the same formerly tough crowd. I think his former boss and predecessor as White House press secretary, Ari Fleischer, said it best last week: “Poor Scott. Scott is about to borrow some friends for 24 hours on the political left, who will throw him out as soon as they are done with him, and he’s burnt an awful lot of bridges to people who really always thought fondly and highly of him.” Fleischer was right on the money. The knee jerk reaction of this camp was to celebrate and praise this brave bastion of truth, epitomized by the hater of all Bush haters, Keith Olbermann, dedicating the entire hour of his show to an interview with McClellan. Already, though, the tone has begun to change, and some on the left have become critical of McClellan for not speaking out sooner—preferably at the very time he had his alleged misgivings and disillusion. And, they ask, wasn’t he being dishonest himself in his daily promotions of the Bush Administration’s view and policies? Perhaps Bush could have been impeached, they no doubt imagine, if only he could have blown the whistle earlier. Those focused primarily on Iraq, meanwhile, have taken to wondering how many lives in Iraq could have been saved if McClellan had been able to find his voice sooner, potentially precipitating an end to the war.

Even though I remain a Bush supporter, I’ve had my share of disappointments with him and others in the administration. The war hasn’t been executed well at all, the tepid reaction to Hurricane Katrina was deplorable, and the President’s ability to communicate with the American people is flawed at best. There are many questions about those and other decisions made over the last seven years, but put in McClellan’s position, I don’t think I’d write a tell-all while my former boss was still in office. Perhaps there is an unwritten rule of decorum violated here that upsets me most, even if I do sympathize to some extent with some of the issues that apparently troubled McClellan. Actually, it seems to me that almost anyone witnessing this who is able to remove his or her political lens momentarily and observe it from a personal or human perspective can’t help but view McClellan as sleazy. Everything seems all too convenient, the issues on which he allegedly differed too fashionable, and his interviews over the last week—much like his bumbling White House press briefings—all too unconvincing and meek. No one likes a snitch, after all, and it’s hard to view McClellan’s book as much more than snitching for profit. When Bob Dole, of all people, emerges from retirement to publicly label him a “miserable creature” and “a total ingrate,” I think it’s clear McClellan made an error in judgment, and one from which his reputation and future career prospects are unlikely to ever recover.