The GOP Thinks About Maybe Being Less Racist

If the GOP doesn’t treat Hispanic immigrants like human beings, they're never going to win the presidency again. 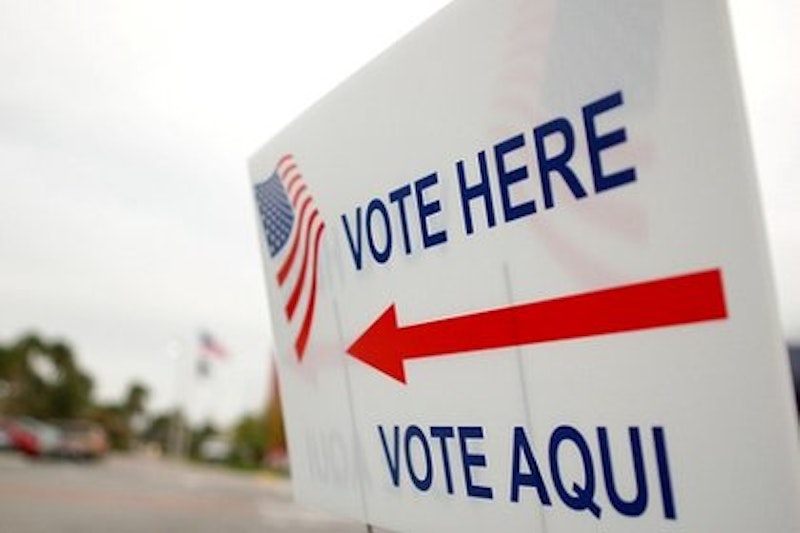 Barack Obama won 75% of the Hispanic vote. In swing states, the margin was even more devastating; Obama took Latinos in Colorado by a jaw-dropping 87-10.

These numbers, and the electoral apocalypse they promise for the GOP as Hispanic populations grow, have concentrated Republican minds. Mitt Romney's hard-right immigration stance and his bumbling blather about "self-deportation" lost him the election. His party has, quite reasonably, decided to try to keep that from happening again. House Speaker John Boehner has already come out and said he wants to "fix a broken immigration system." Right-wing television personality Sean Hannity was even more explicit, stating shortly after the election that he had "evolved" on immigration and that undocumented immigrants need a "pathway to citizenship."

Obviously, this is opportunistic; the GOP hasn't suddenly woken up and realized that treating Hispanic immigrants like human beings is the right thing to do. Rather, the Party knows if it doesn’t treat Hispanic immigrants like human beings, they're never going to win the presidency again. Many liberal commenters, noting the hypocrisy, have been quick to sneer, and to point out that cosmetic changes really are not going to be sufficient. Matt Yglesias, for example, argues that the GOP's problem is not just its stance on immigration, but an ingrained policy of white nativism.

The GOP has an economic agenda tilted strongly to the benefit of elites, and it has preserved support for that agenda—even though it disserves the majority of GOP voters—with implicit racial politics.

Consider the GOP’s deeply racialized campaign against Supreme Court Justice Sonia Sotomayor. What was so surprising about this—and I know I’m not the only fair-skinned English-dominant person with a Spanish surname who was genuinely shocked—was that conservatives could have easily opposed her purely on policy grounds. Sotomayor is a fairly conventional Democrat on constitutional issues, and that would have been ample reason for conservatives to criticize her. Indeed, Justice Elena Kagan was attacked on precisely those grounds. But rather than tempering opposition with at least some recognition that Sotomayor’s life story might be a great example for immigrant parents trying to raise children in difficult circumstances, the country was treated to a mass racial panic in which Anglo America was about to be stomped by the boot of Sotomayor’s ethnic prejudice. The graduate of Princeton and Yale Law, former prosecutor, and longtime federal judge was somehow not just too liberal for conservatives’ taste but a “lightweight” who’d been coasting her whole life on the enormous privilege of growing up poor in the South Bronx.

Lightening up on immigration won't be enough. Like it or not, conservatives are going to need a much more thorough housecleaning if they want to survive in an increasingly diverse future. No more gratuitous ethnic mockery. No more pretense that reverse racism is the real racism. No more suggestions that minorities just want a handout. No more screeching about the incipient threat of Sharia law. No more saturation coverage of the pathetic New Black Panthers. No more complaining that blacks get to use the N word but whites don't. No more summers of hate on Fox News. No more tolerance for Dinesh D'Souza and his "roots of Obama's rage" schtick; or for Glenn Beck saying Obama has a "deep-seated hatred of white people"; or for Rush Limbaugh claiming that "Obama's entire economic program is reparations." No more jeering at the mere concept of "diversity." And no more too-clever-by-half attempts to say all this stuff without really saying it, and then pretending to be shocked when you're called on it. Pretending might make you feel virtuous, but it doesn't fool anyone and it won't win you any new supporters.

Yglesias and Drum are both broadly correct; the GOP's problems with Hispanics (and blacks, and Asians, and many others) is not rooted in one policy, but is instead a function of the fact that the Republicans have gone out of their way for many years to make it clear that they are the party of white racial animosity. Conor Friedersdorf has a brutal column about Rush Limbaugh's history of race baiting, if you need examples, but really, the proof is in the election numbers. You don't lose every demographic but whites by those kinds of margins unless you're actively trying to lose every demographic but whites. It's not complicated. And, yes, there has to be wholesale change in attitude, not just cosmetic policy changes, if the GOP wants to turn things around.

But I think Yglesias and Drum are wrong to focus entirely on what immigration reform won't do. The GOP has a lot of changing to do. But one concrete, helpful change would be to stop being racist asses on immigration.

It's true that altering immigration policy won't entirely change Hispanic voter preferences. But surely it could change them a little. And if it changes them a little so that there are slightly more Latinos who would vote Republican, that will give Latinos more of a voice in the Republican Party. That, in turn, could push the GOP away from racist nativist nonsense. The Republicans have been caught in a spiral where they appeal only to white nativism, driving other groups away. A change in immigration policy wouldn't reverse this trend all at once, but it would be a start.

Perhaps even more importantly, once you start thinking of non-whites as constituents and human beings, it can be hard to stop. Yglesias and Drum seem to think that what is needed is not policy changes, but a rejection of racism. They don't quite understand that a policy change can itself be a rejection of racism. To endorse a path to citizenship for illegal immigrants, Republicans have to stop talking about illegal immigrants as if they are leeches or monsters. And, though it's not often acknowledged, people are just as likely to believe what they say as they are to say what they believe. Yglesias and Drum are arguing that the GOP needs less racism in order to have less racist rhetoric, but really, it's just as likely that less racist rhetoric around something like immigration reform will lead to less actual racism.

There's nothing wrong with pointing out to Republicans that they have a long way to go on this issue. But surely it's also important to give credit where credit is due. If the GOP decides that the election is a mandate for reasonable immigration reform, that is great news for immigrants, for the Hispanic community, for the GOP, and for America. Give credit to Boehner and Hannity and everyone who joins them in taking the first step towards a more equal and more honorable GOP.