His constituents like the man, but don’t want him as Obama’s successor. 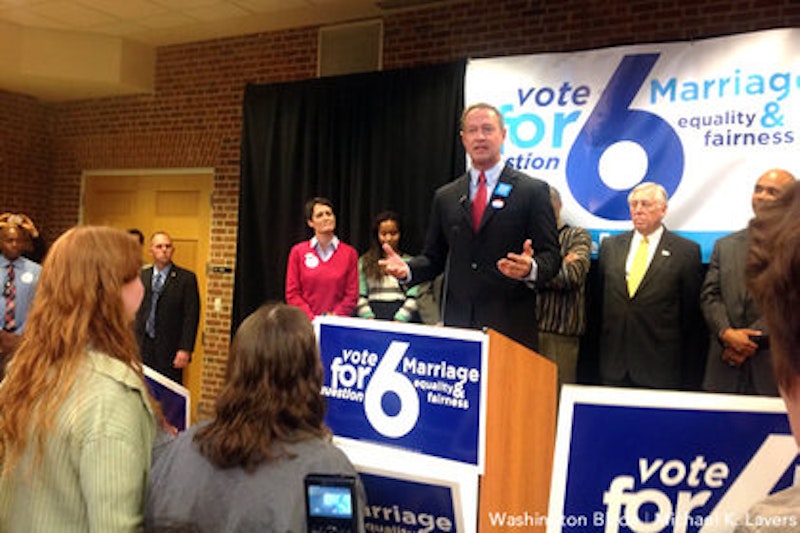 Martin O’Malley (D) had a very good election night at home. He came up short, however, in his broader precincts, the state houses of America. And contrary to the rambunctious national media, the voters of Maryland gave their Democratic governor a resounding Bronx cheer in his stealth campaign for president.

Voters approved four major ballot questions, two of which have national implications and are certain to raise O’Malley’s profile among the groups they address as well as the Democratic Party’s broader left flank. On the day after the election, O’Malley—as well as Maryland—was among the topics on news shows as well as a point of discussion about O’Malley’s political future as a possible presidential candidate in 2016.

There were strong cross-currents in Maryland over cultural issues that have torn apart the voters and had ecumenical and social organizations working against each other as well as conflating issues in a deft display of election day chicanery. (Poll workers wearing light- blue t-shirts emblazoned with President Obama’s campaign slogan, “Forward,” were also stamped with the words, “Vote For All Questions.” This is an updated version of the old bobtail ballot.)

An inter-faith coalition of religious leaders, for example, pushed hard for voter approval of Maryland’s version of the Dream Act while many of those same religion groups opposed adoption of the same-sex marriage law, both of which had been petitioned to referendum along with the new congressional map. O’Malley has said in an election afterthought that he hopes to tighten the petition process to prevent a reoccurrence of wholesale electronic name gathering that mimics plebiscite government.

O’Malley put his neck and his future on the chopping block on two controversial ballot issues, one of which had never been approved in the 32 states where it was put before the voters. That was gay marriage, which carried by 48-42 percent. Maryland, Maine and Washington joined six other states and the District of Columbia in validating same-sex unions at the same time it was rejected in Minnesota. And in doing so, O’Malley confronted his own Roman Catholic Church which had opposed the issue in petitions and from its pulpits. (The Supreme Court is considering whether to hear arguments against the Defense of Marriage Act that defines a union between a man and a woman. It has been overturned by two lower courts.)

The Dream Act was another of O’Malley’s signature issues. It was ratified by 58 percent of the voters while 42 percent opposed it. Maryland now joins 13 other states that have some form of the Dream Act. Maryland’s version will grant in-state tuition to children of illegal immigrants who meet certain conditions. Two other O’Malley Administration initiatives that won voter approval were the new Congressional map (since upheld by the Maryland Court of Appeals) which had been petitioned to referendum by an odd-fellow collation of Republicans and blacks, and the expansion of gambling in Maryland which was a constitutional amendment advanced to the ballot by the General Assembly.

The newly realigned Congressional districts were designed to add a seventh Democrat to Maryland’s eight-member House delegation. It accomplished that mission, enabling John Dulaney, a wealthy Montgomery County Democrat, to eject 10-term Republican Roscoe Bartlett from his Western Maryland district. Petitioning the map to referendum was a foolhardy exercise. The majority Democratic General Assembly simply would have returned to Annapolis and reenacted the same misshapen ink-blot map.

An estimated $97 million was spent by competing interests on Question 7, the proposal to expand gambling, by adding a sixth casino in Maryland and allowing table games such as blackjack and poker at all state-sanctioned gambling emporiums. The principal players were MGM which has proposed building an $800 million resort-type casino at National Harbor, a mini-city on the Maryland bank of the Potomac River in Prince George’s County; Penn National, which fought the new location, arguably to protect its own gambling interests in West Virginia as well as its Rosecroft Raceway interests; and Milton Peterson, the developer of National Harbor, who in the final days ponied up $500,000, presumably for walk-around money in PeeGee County. This, too, was an O’Malley-backed measure that was forced on him and the legislature by Senate President Thomas V. Mike Miller (D-Calvert-Prince George’s), to what advantage the public may never know.

While O’Malley was enjoying huge successes in Maryland, his secondary obligation as chairman of the Democratic Governors’ Association was suffering commensurate but overlooked setbacks. The principal responsibility of the DGA chairman is to help elect other Democrats to governorships. But O’Malley was having no such luck. The number of Republicans who now control state houses is at least 29 and could reach as many as 33 when the vote count is over, the most since the 1920s when the GOP controlled 34. This could lead to even more mischief at the state level than the usual GOP template of vaginal probes, union busting and voter ID laws. (The Supreme Court has agreed to hear arguments against the 1965 Voting Rights Act’s Title V, which grants federal control of election law changes in states with a history of discrimination.)

Democrats currently control 20 governorships, with one wearing the chevrons of an independent. The most notable turnover was in North Carolina, where a Republican was elected to succeed Gov. Beverly Perdue, a Democrat and O’Malley’s vice chairman at DGA, who chose not to run for reelection out of fear of defeat.

Meantime, two back-to-back polls, released the week before the election and largely overlooked because of all of the campaign commotion, showed that Maryland voters are in no mood to send O’Malley to the White House, although they approve of the job he’s doing as the state’s governor. A Baltimore Sun poll showed that by a two-one margin—50-21 percent—Marylanders would not support O’Malley for president. And a Washington Post poll revealed even less enthusiasm, with only 22 percent saying O’Malley would make a good president while 62 percent say he would not.

But those poll results did not deter TV panelists from speculating on O’Malley’s political future as a presidential candidate. O’Malley was the subject of a morning-after segment on MSNBC as Obama heads into his final term and a vacant seat in 2016. And O’Malley’s photo appeared in a gallery of prospective Democratic candidates that included such bold-face company as: Secretary of State Hillary Rodham Clinton, Vice President Joe Biden; New York Gov. Andrew Cuomo; and a new entry, freshly reelected New York Sen. Kirsten Gillibrand. Republicans whose photos appeared on the same page of presidential prospects were: New Jersey Gov. Chris Christie; Jeb Bush; Florida Sen. Marco Rubio; Louisiana Gov. Bobby Jindal; Rep. Paul Ryan (WI); and Kentucky Sen. Rand Paul. That’s a helluva an ego trip for a governor from a pismire state such as Maryland.

O’Malley’s term as governor expires in 2014, giving him two years to explore and build a national political organization or to seek out a position that guarantees high visibility with few political risks. He has the basics in place to build an organization through his work as chairman of the DGA and the chits he has accumulated through campaigning and fundraising for Democratic candidates.

But the most valuable IOU in his portfolio might be the one with the initials of Obama. O’Malley functioned throughout the campaign year as an aggressive surrogate for the President as well as a defender of White House Policies. O’Malley also hosted many of Obama’s visits to Maryland. In addition, Maryland’s governor was a welcome participant at many White House meetings and ceremonial functions. So there is a question of whether Obama will repay O’Malley with a high-visibility position to full out the two years of down-time in O’Malley’s political calendar leading to 2016.

Obama has other obligations, if not conflicts, as well. And they are to his secretary of state, if Clinton decides to run, and to his vice president, if Biden tries again for the brass ring. Obama is deeply indebted to former President Bill Clinton for his role in the campaign and for his rousing speech at the Democratic National Convention. O’Malley is no doubt enjoying the attention, not encouraging the talk, but also not discouraging it, mind you, just hanging out, waiting to see if the percentages add up to a run for president.