My Gut Could Be A Lot Smarter

I fell in love with Mitt Romney's awfulness and I paid a price. 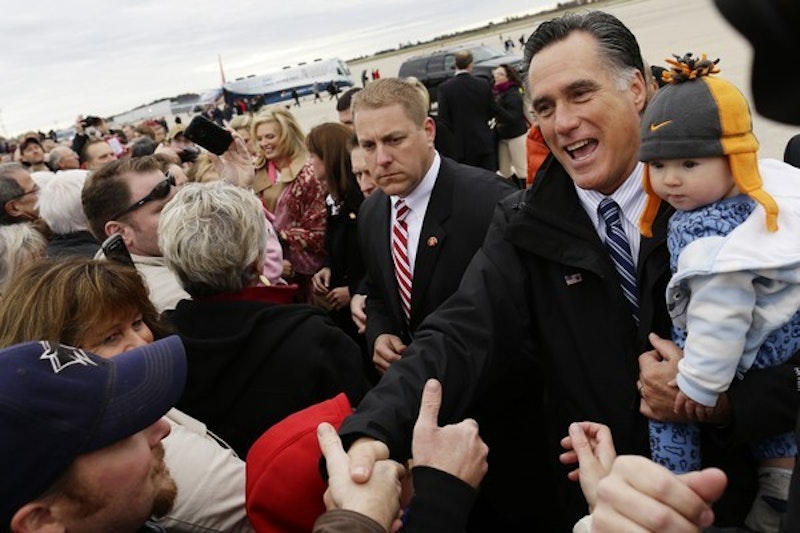 I made one really good prediction this year. It was in February. A Hungarian friend asked me if I thought President Obama could be reelected and I said yes. Wait, there's more. The friend was aghast—after all, wasn't Obama a failure? What had happened to Hope and Change? How could Obama stay in office while presiding over a dead economy? I explained about the auto bailout, killing bin Laden and the economy's gradual progress from catastrophe toward mediocrity. By November, I said, the economy might even be fairly decent, which could be enough for Obama to scrape by.

Wow! Unfortunately that was it for my good predictions. Here's one I committed to print:

The debates aren't going to help Mitt Romney. They may hurt him a great deal, they may be a wash, but they won't help him. A fundamental is at work here. To be around Romney is to feel pain: He twitches so badly, but he won't go away. That will be the prime fact of the debates, the experience no one can escape, and it will sabotage any attempts he makes to pin Obama on the Benghazi mess.

That thought appeared two days before the Denver debate, where Romney came on like a confident talking brochure (for fraudulent real estate, I suppose) while Obama dragged himself through unending sentences that nobody wanted to listen to, including Obama. Here are my two lines of defense. First, many pollsters say that Romney's ascent began a few days before the debate, meaning his Denver triumph and his rise in the polls simply coincided; therefore, the debates didn't help him. Second, the election results closely matched at least one poll taken just before the first debate; therefore, the debates were a wash, just like I said.

But come on. I put in that business about a wash because a smart forecaster always hedges. Being cagey is not the same as being right; it's what you do so you won't look too bad if you're wrong. And it's not like I thought the debates would have no effect at all. For me it's a leap of faith to believe that they moved nobody. Like Obama, Romney, their campaign staffs, all on-air commentators and most of the population, I believe that presidential debates change people's minds.

Since I don't believe my own defense, I'm left with this: I was wrong. I was in thrall to my personal experience, and that blotted out lessons taught by past presidential campaigns. Challengers prep hard for debates, whereas incumbents don't take the things seriously until slapped with a poll drop. I forgot this. My only excuse is that I had watched all the Republican primary debates from August 2011 onward. I had seen with my own eyes what the public Romney was like and I'd fallen in love with his awfulness. Surely he would weird out enough voters to make his campaign a joke. But no.

Call that going with your gut, I suppose. My gut is a lively fellow but could be smarter.

The long view. Did Romney do all that badly? All right, losing when the incumbent has 7.9% unemployment does take something special. But so does losing when the incumbent started and has failed to finish the dumbest war in American history. I remember my frustration when John Kerry went down and people acted like the Republicans had been vindicated. No, the Republicans had scraped by. We'd won 48%, for Christ's sake.

Now the Republicans are going through the same thing. People are acting like the Party's down for the count when close to half the country just voted for it. Some factors are different, of course. Odds look good for the jobless rate to keep falling, which holds out hope that the Republicans' great weapon against Obama will disappear. The population is becoming browner and younger, so the Republicans will have to appeal to the young and brown without scaring off the old and white, the party's one great voting bloc. Democrats didn't have problems like that after 2004. We just had to wait for the stupidity of the Iraq War to sink even more deeply into the American consciousness, which it did.

During the wait, the Republicans helped us by screwing up everything else they could touch, most notably hurricane response. And then the economy collapsed. Nothing like that will happen with us. Just ask my gut.