Before Mitt Romney could fleece us, his campaign team picked his pockets. 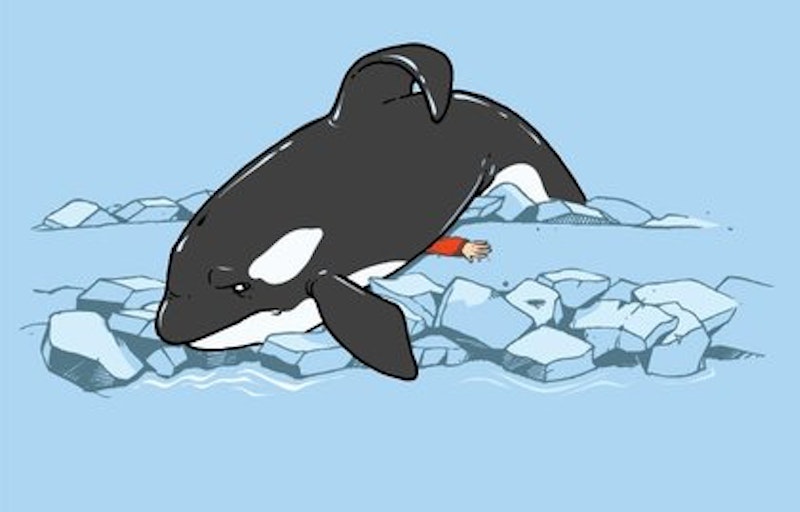 The occasion for this bitterness is ORCA, a top-heavy get-out-the-vote scheme that involved smart phones and an app and high-tech coordination and (I read) about 30,000 volunteers who spent Election Day wondering why the new app on their smart phones was doing absolutely fuck-all instead of helping them keep track of who had voted for Romney and who needed a reminder.

How good was ORCA? “Another source that closely studied the Obama campaigns GOTV efforts as compared to ORCA said bluntly that 'the Obama training manuals made ORCA look like a drunken monkey slapped together a powerpoint,' adding that we must duplicate and improve what they accomplished to have any hope for the 2014 & 2016 ground game.”

ORCA was never tested and, it would seem, never came close to working. And Romney paid a lot of good money for it because he's a can-do businessman and technocratic manager who sweats the details and knows how to turn around a failed enterprise, whether it be the Olympics, a hapless company in the Midwest, or the United States government. But not his presidential campaign or anything connected with it, a fact that does cast some doubt on the other claims.

Why did Romney buy ORCA? Because he was talked into it by some fellows who made money off the deal. Now, obviously, David Axelrod and Jim Messina and the rest of the Obama team do not work for free. But they aren't in the game just for the money. Neither are many of the operatives on the right. But their side does have a certain problem. The liberals want a world of greater niceness and slightly reduced income inequality. The conservatives want a world where go-getters can go and get with nothing to hold them back. What they get is money, and delivering quality work is only one way of obtaining some. Another is to keep your costs minimal and your fees maximal, and to grab a plane out of town with a check in your pocket.

Apparently a story of this sort lies behind ORCA, or that's what the “campaign insiders” have to say. It's a case of the biter bit, since Romney's one accomplishment during the campaign was to convince a decent number of swing voters that his back-of-an-envelope “five points” (“Do good things, not bad things”) constituted a program for turning around America. I've never heard anyone call Romney stupid. But it seems that some fellows in suits treated him as if he were stupid, and he came through. Therein lies a lesson.

Decades ago I was bothered by an argument known as “the law of unintended consequences.” By the time it reached us, the general public, this law was really more of a claim, and it went like this: Point at a government program that didn't work and you had proof that no government program could work. They were all doomed to produce effects crosswise to their purpose, the way a pencil in a glass of water is bound to be refracted. Why? The people peddling the notion went easy on that part of the deal, but at least they had something impressive to repeat. This was at the dawn of the Reagan era, and all the proof needed for the newly unveiled law was a brief wave in the direction of President Lyndon Johnson's War on Poverty, which actually did reduce poverty but did not eliminate it. Hey, there you go, social programs don't work!

I feel on safer ground with my Law of Consultants. If Romney can get shucked, then so can you or I. Exalt the profit motive (powerful and necessary as it is) and you risk falling prey to people who care only about profit. Such people will always be on the prowl, and that's why we need a government willing to reduce go-getting from a supreme good to a necessary activity tempered by firm restraints. ORCA is the clearest proof I've yet seen of this principle. The Republican Party, as always, is a coalition of conmen and suckers. The twist is that conmen are often suckers themselves. The GOP demonstrated as much with national security 10 years ago. Turns out the principle also applies to elections.

And a prime part of modern conservative theory, or attitudinizing, is that people are liberal because they don't have the balls and will needed to be conservative. Conservatives get the job done, stand on their own two feet, don't count on others to carry them. Liberals just hunch at their cubicles and bitch about the company's benefits plan. Now this. It turns out the liberals are up to some formidable stuff while at their cubicles—the Obama GOTV team did better than fine while the conservatives were blowing smoke up each others' ass.

Badass and poignant. Why was the project called ORCA? The letters don't stand for anything. Instead the name derives from Project Narwhal, which was part of the Obama team's GOTV operation. Romney's people looked in Wikipedia (I guess) and found out that the narwhal has just one natural predator, that being the orca. Badass! The right does love swagger, but in the old days they also loved detail, or at least focused on it enough to beat the hell out of campaign obstacles.

Here's the final touch. Gail Gitcho, Romney's communications director, said before the election: “The Obama campaign likes to brag about its ground operation, but it's nothing compared to this.”