True leaders frozen in amber and memes, and media personalities fighting amongst themselves as power realigns. 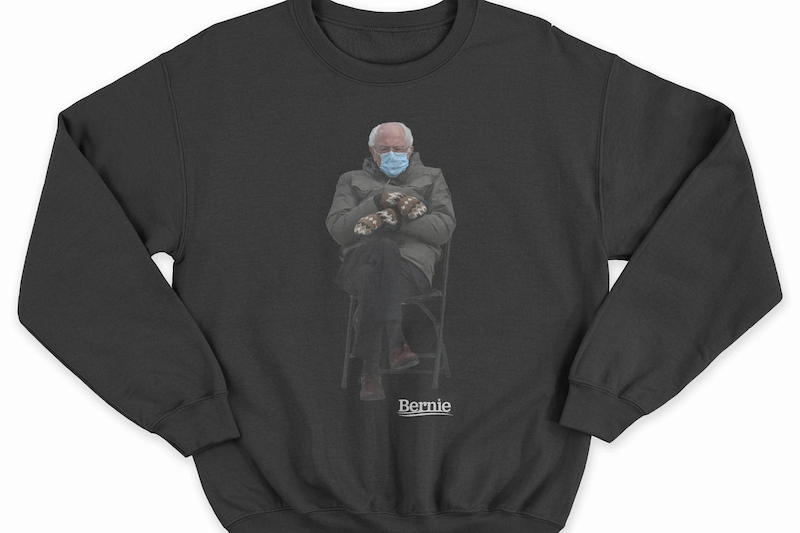 Bernie Sanders has been spiritually incarcerated by these memes, like a fly in amber. Free him. The picture makes it easy: the angle is perfect for a cardboard cutout or “life size” standee, and it can be dropped into practically anything.

There’s no political salience to the Sanders “grumpy mitten” meme. But there is a profound spiritual quality to this one; I agree with Marianne Williamson that the subconscious of the country is focusing on whom we regard as a real leader, our true leader. The way this picture spread so quickly everywhere, and persists nearly a week after the inauguration is because the inauguration itself was so boring and uneventful. You’d think the first Black woman Vice President would’ve registered a bit bigger on the pop culture front than yet another Sanders grumpy/“he’s just like us” meme. There have been so many of these already, like the still from his 2020 campaign ad, where he’s “once again asking for” something, and incidentally, wearing the same coat as in the grumpy mittens photo.

This latest Sanders meme is not on the level of, but close to, the pinnacle of modern memes: The Dress. Rarely have I seen a meme circulate as quickly and for as long with as sustained intensity as this one, and as I can tell you from my six years of personal research regarding The Dress, that too was a spiritual phenomenon. Memes reveal in an instant how we see, and there has never been a better illustration than that beautiful, mysterious Roman Originals garment. Here, we’re confronted again with different ways of seeing: is Sanders grumpy, practical, frugal, frivolous, or some combination of all four? You know it when you see it—the chair meme is an obsidian mirror upon which we throw our latent desires overboard for the world to see.

But even this is played out: there’s no utility or purpose in being a Sanders partisan in 2021, less than a week after Joe Biden was sworn in. He may be part of the administration, and he may be beloved still despite running two losing campaigns ultimately won by his own personal obsidian mirror—Donald Trump. Marianne Williamson is right, although unfortunately it’s not a leader that everyone sees in this image. He didn’t lose many followers in 2020, but he didn’t gain many either.

Sanders is frozen in amber either as a lost cause, a martyr for Millennial FDR leftism, and an eternal would’ve—could’ve—should’ve. For others, he is a monster: #VoteBlueNoMatterWho is a sentiment older than me, but that current form is tied more to Sanders’ “stealing” Hillary’s momentum in 2016 and perhaps almost blowing it this time. It was never his turn; it was hers. And on the other hand, Bernie would’ve won. People will go to the grave with these convictions.

So ends Sanders’ national political career, reduced to a photograph containing so many different images for different people. Sanders himself has already printed the photo on sweatshirts and coffee mugs and is (so they say) donating all of the money to Meals on Wheels Vermont. I can only take the Senator at his word, as I’m sure I’m not the only one who was more than a bit pissed that what meager donations given to his campaign last year ultimately went directly to the DNC, an organization I’ve never supported and will never voluntarily give money to. But I drink Coca-Cola, too. Chew gum, same time. Free Aimee Therese.

At the moment, a small universe of left and center-left podcasts and YouTube shows have been bickering, squabbling, and yelling at each other over things I don’t understand, like #ForceTheVote. I was unlucky enough to catch the Bad Faith debate with Sam Seder live (it was research), and while I’m a fan of The Majority Report, Seder never comes off well in debates, even if he usually wins. And good lord, listening to him and Brianna Joy Gray go at it over a picayune procedural vote for universal healthcare that would’ve put representatives on the record as for or against.

This all devolved, or started, at ad hominem attacks, usually related to someone named Jimmy Dore I’m not familiar with. I suppose the brief break I took from political news after the election was a luxury not afforded to political pundits, who have to make hay while the sun bears down on a media landscape looking increasingly barren with each passing year. Absent an election, primaries, debates, or runoffs to look forward to, they’re left with each other, and the narcissism of small differences rears its ugly heads everywhere you look: this one is a DNC shill, that one is a CIA plant, this other one still is actually a crypto-fascist agent provocateur (Aimee Therese?)

Katie Halper, another player in this stupid squabbling circle, spent hours on Saturday night assembling a ranked and categorized “championship” of Bernie chair memes. Atomized by coronavirus and broadcasting live from their bedrooms or broom closets (some of them clearly live in mansions, while others are actually working class), these shows look little more than public Zoom reunions, and the level of discussion and political discourse is about the same: familial, nasty, completely unproductive.

As Bill Gates buys land and Trump repairs to Mar-a-Lago either to face prison or fire up his base one more time, the “experts” who are “doing the work” are busy fighting amongst themselves. And our “true leader,” as much as Williamson wants to believe, is not universally beloved on a subconscious level. He’s a powerful force, but he’s trapped, spiritually incarcerated by these memes. Free him—free him so he may lead us once again. Or just buy the sweatshirt.