Killjoys: A Critique of Paternalism is a plea for governments to leave their citizens in peace. 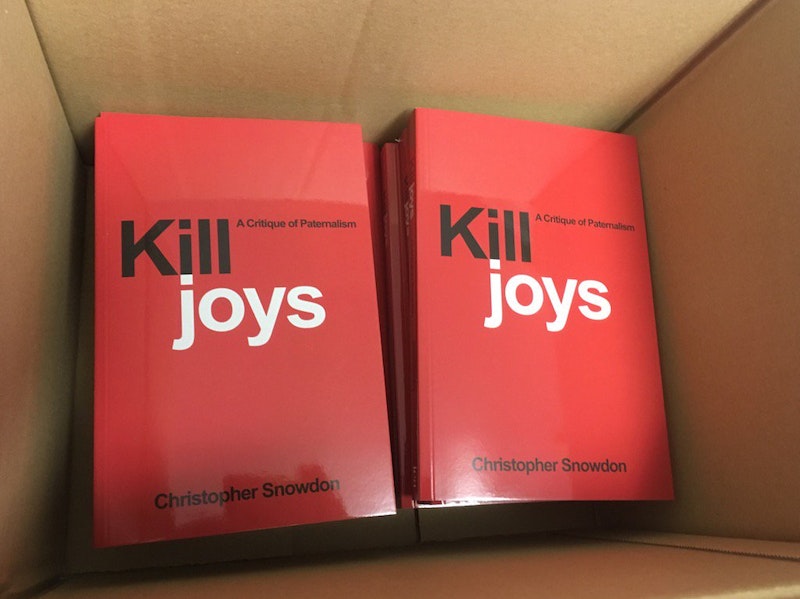 Londoners are so susceptible to the predations of advertisers that they mustn’t be allowed to see an advertisement for a weight-loss product featuring a slender, fit model in a bikini. The government should intervene and ban the ad, as the city’s mayor, Sadiq Khan, decreed in 2016. Mike Bloomberg “advocated” for the people in his time as NYC’s mayor by trying to restrict the sales of “sugary” drinks. In one sort of mind, both mayors exercised the responsibilities of their office correctly, while to another way of thinking this is the nanny state at its worst, telling grown-ups how to behave.

Christopher Snowdon, with Killjoys: A Critique of Paternalism, has written a book designed to make people question the creeping involvement of government in personal decisions. He bristles at the overreach of power done out of “good intentions,” which as Albert Camus noted “may do as much harm as malevolence if they lack understanding.”

Adolf Hitler, Josef Stalin and Mao Zedong all acted with what they sold to the people as the best of intentions, which ended up costing at least 77 million lives. No government ever wants to be seen as an oppressor, so they find ways of tricking the people into buying their benevolence. As history shows, that's not hard to do.

Snowdon, who’s the Head of Lifestyle Economics at the U.K’s Institute of Economic Affairs, relies heavily on British philosopher John Stuart Mill, author of the influential celebration of personal freedom, On Liberty (1859). In particular, the author focuses on Mill’s “harm principle,” which posits that “the only purpose for which power can be rightfully exercised over any member of a civilized community, against his will, is to prevent harm to others. His own good, either physical or moral, is not a sufficient warrant.”

Politicians, Snowdon writes, are violating this fundamental assumption by pushing for restrictions on legal items such as sugary food, alcohol, and cigarettes by raising their price, limiting their advertisements, and restricting where they can be sold and consumed. The author wouldn't be impressed with Sadiq Khan’s statement, “As the father of two teenage girls, I am extremely concerned about this kind of advertising which can demean people.” Using such flimsy reasoning, Khan could also justify banning shampoo commercials picturing women with a lustrous head of hair because they're “demeaning” to women unable to attain such a level of luxuriance. The potential for banning would be limitless, and would always be done out of concern for the “common good.”

Snowdon thinks about the tyranny of the majority when he hears phrases like “the common good” that give the modern progressive a warm feeling. He cites Mills’ concern of “democracy becoming nothing more than a vehicle for the prejudices of the masses”—a collective mediocrity where the pedestrian tastes of the masses are imposed upon the free thinkers and creative types. Unlike progressives, Snowdon’s disinclined to accept the assertion that people are too irrational to think for themselves or too weak-minded to protect themselves from advertisers. The author points out that Mills, in On Liberty, rightly exempted children from his warnings against paternalism. His concern is that the “nanny state” now treats everyone like children.

The “stewardship state,” as Snowdon also calls it, is now in the habit of identifying more and more groups as needing its protection. They include the impoverished, elderly, smokers, drinkers, gamblers, and even—he calls this one “Orwellian”— those without sufficient healthcare-related knowledge to act as fully autonomous. In this way, “The state grows in power and authority in proportion to the degradation of the subjective capacities of its people.” The author sees connection between the individual deemed unable to make proper healthcare decisions and the “incompetent citizen in the sphere of politics who lacks the capability to function autonomously.” The state would have to do the thinking for this particular disadvantaged group.

Snowdon has offered a detailed analysis of the pitfalls on the nanny state with this book. For contrast, he often cites the views of Sarah Conly, whose 2013 book, Against Autonomy: Justifying Coercive Paternalism, is an unapologetic plea for the nanny state. Conly makes the argument for the state’s intervention in health matters by positing that there's no freedom if someone's not alive to enjoy it, but Snowdon counters by stating that it’s not everyone's ideal to live a long life. Some people, for example, may want to live a shorter life filled with drug-soaked euphoria, which he feels is a right. Boiled down, the author’s message is that what's “good” for someone may not be want they want for themselves, and that the government should respect this.