The Epoch Times Is Making the MSM Nervous

Upstart Taiwan-funded publication has its plusses and minuses. 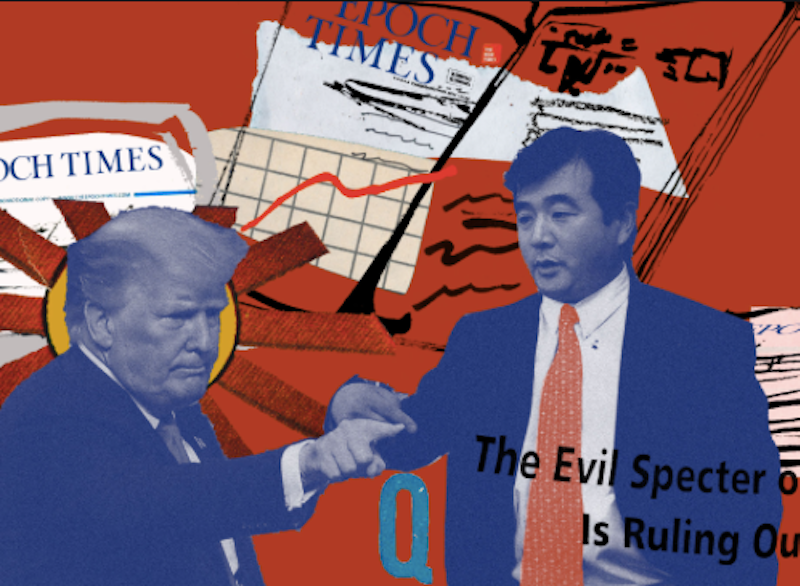 The Canadian Broadcasting Company (CBC), unhappy with the way that the Epoch Times has covered the Chinese government's response to the pandemic, recently launched a multi-platform attack on the New York-based, right-wing media outlet that drew substantial criticism. The Canadian state broadcaster used a quote from an individual it interviewed to characterize the Epoch Times' reports on the Chinese Communist Party's alleged coverup of the coronavirus as "racist and inflammatory" in its headline.

After the story came under fire, CBC revised it, attaching an editor's note explaining why it had removed "racist and inflammatory" from the headline. That language came from an anonymous source, so what was actually inflammatory (not to mention defamatory) was including those words in the headline. As the left-leaning CBC's well aware that most people only read the headlines, it's clear what their original intention had been—to tar the Epoch Times' reputation in an underhanded manner. Defending yourself from allegations of racism, even in the absence of evidence (we're also supposed to believe that a publication run by Chinese people is racist against Chinese people), is an uphill battle, which is why the allegation's used so promiscuously these days to silence the opposition.

The Epoch Times, originally founded to target the Chinese diaspora, but now a blatant Trump cheerleader, has lately caused considerable anxiety within the newsrooms of a number of major media outlets. The New York Times, which recently published an op-ed supporting China's total takeover of Hong Kong, joined in on the bashing with an October 24 story it ran after conducting an eight-month investigation of the New York-based media outlet that's linked to Falun Gong, a popular anti-Communist spiritual group banned in China. The Post Millennial, a conservative Canadian online news magazine started in 2017, didn’t think much of the Times story, which it called a "hit piece" and a "failed takedown" in an article that was posted on October 30. Writer Libby Emmons criticized the NYT for not respecting the Epoch Times' opposition to rampant human rights abuses in China and its "extensive inquiries into the origin of the coronavirus."

The Times piece accused the Epoch Times of running "strident accounts of persecution in China [that] can sometimes be difficult to substantiate or veer into exaggerations." But, as Emmons pointed out, the story provided no evidence of any exaggeration. It's hard to avoid the conclusion that the Times is intent on being an apologist for Beijing. The paper ran an op-ed on October 1 defending the oppressive Chinese Communist Party's plan to strip Hong Hong of the "special status" (which includes political freedoms and rule of law enjoyed under British rule) it promised the former British colony when it reverted back to the motherland in 1997. And then, three weeks later, it criticized "strident accounts of persecution" of a government that has locked up approximately one million Uighur Muslims in "re-education camps" in Xinjiang, and has been credibly accused of forcibly harvesting the organs of those internees. If the Times is going to do an eight-month investigation on a China-related topic, the horrors of Xinjiang would be a much better target than the Epoch Times.

To understand the origins of this controversy, it's important to examine the progressive point of view regarding criticism of the Chinese government, which is based on the assumption that the general public isn't intelligent enough to distinguish between criticism of the tyrannical Chinese government and criticism of Chinese people. If a journalist writes, "China suppressed word of the coronavirus from day one," many readers will take that to mean that Chinese people were complicit in covering up the virus rather than what it obviously means—that the Chinese communist government suppressed the story. Progressives have linked this alleged conflation, without establishing that it even exists, with the violence against Asian people that has spiked during the pandemic. This is a horrific development that shouldn’t be tolerated, but there's no evidence to suggest that criticizing "China" is an act of racism that encourages more racism. That belief is based on a hunch. Ironically, the very same people who viciously criticize Israel while denying that they're anti-Semitic are buying into this flawed thinking.

By the logic of progressives (with exceptions), you can no longer criticize a nation by name without encouraging racist violence. If I were a ranking official in Beijing charged with deflecting international skepticism about China's initial handling of the coronavirus situation, this is exactly the strategy I’d devise. Progressives haven’t yet developed the confidence necessary to defend themselves when the race card gets played.

I've heard reports of the Epoch Times appearing unsolicited in people's mailboxes. This, and other things I've noticed, makes me skeptical of the publication, even though I've noticed some professional-looking journalism within its pages. So I take the newspaper, as I do with any media outlet, with a grain of salt. Its Trump coverage I'd ignore, because of the obvious bias. But the China coverage I'll pay attention to, without necessarily buying everything that gets printed. I can't rely on this from The New York Times, which has thrown Hong Kong under the bus by running an op-ed written by a collaborationist Hong Kong politician, and is leery of criticizing "China" in general lest it be spuriously accused of racism.

China (not Chinese people in general) is the biggest threat the world will face for the foreseeable future. It's a secretive and brutal regime that wants to establish hegemony in the South China Sea; and that's just part of their menace. All of the "respectable" media outlets looking to trash the Epoch Times for its racism and bias ought to clean their own houses before they start throwing stones.