The whole ball of hashish seems like it could give birth to a new religion and that's exactly what happened. 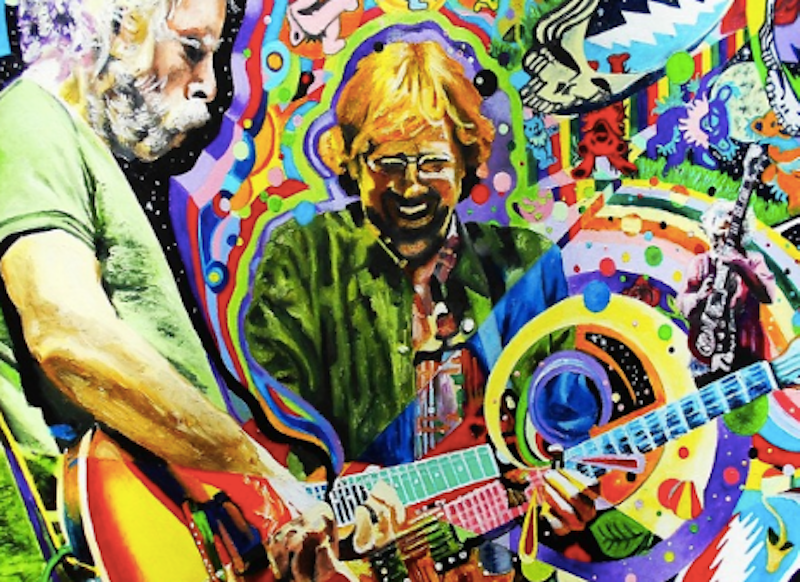 Many strange phenomena have been connected to The Grateful Dead. They were one of the few psychedelic groups to include a member who regularly carried a loaded gun (their first keyboard player, the late Ron “Pigpen” McKernan). They were the first rock group to play a concert at the foot of the Egyptian pyramids. Dead lyrics are full of cryptic references and mysterious imagery. Even their name evokes an atmosphere of restless spirits and supernatural bliss. The whole ball of hashish seems like it could give birth to a new religion and that's exactly what happened. In the late-1980s a small community of Deadheads calling themselves The Spinners made a pilgrimage to Mendocino County, California where they formed The Church Of Unlimited Devotion. So far, this has been the first and only religion centered on the Dead’s music.

Decked out in flowing, brightly colored chadors and cassocks, The Spinners became a major presence when concertgoers started noticing large groups of entranced young people busting out whirling dervish dance moves in the midst of the band’s improvisational sets. The Dead’s modal jams were influenced by eastern folk music and the Gypsy guitar style and therefore were ideally suited to the moves. These holy steps came from the Sufi Muslim tradition, a faith that’s had other ties to hippie culture including Richard Thompson, a guitarist whose music can be seen as the British counterpart to The Dead's famous roots rock recordings; Thompson and his wife Linda converted to Sufism in the early-1970s. Muslim traditions were only a small part of the ritualism created by The Church. It also embraced elements of Anglo-Saxon Christianity, Hinduism, and the Greek and Russian Orthodox Churches.

The Spinners once described Dead founder Jerry Garcia’s guitar as “a channel for God’s voice,” giving Garcia a Buddha-esque/God-like status. When Magical Blend magazine asked Garcia about the quasi-deification, the musician replied, “Well, I’ll put up with it till they come for me with the cross and nails.” For most, The Spinners were harmless, another part of the crazy quilt that is the Dead’s extended family, and another example of the weird atmosphere that sprouts up wherever they go. Long time Dead publicist Dennis McNally shared a darker view with the Florida Sun-Sentinel: “This is an extreme wing of the Grateful Dead family… a young scene. A lot of these people… are spiritually homeless. For many, this becomes a substitute family.”

Self-described trust fund baby Luther Dulaney became an ardent supporter of The Church after falling in love with a Spinner girl he met in 1988 while on a road trip attending a series of The Dead’s US tour dates. Beguiled by their multi-cultural spirituality and the sect’s charismatic leader New England expat Joseph Lian III, Dulaney loaned The Church $108,000 to purchase land that became their headquarters on a former Hare Krishna farm located near the remote northern California town of Philo. Far from watchful eyes, they took a hard fall down into the hole of cult infamy. Lian was dogged by allegations of physical abuse, megalomania, adultery, and (in another claim reported by the Sun-Sentinel) “intense deprogramming.” One of the most egregious accusations was lodged by Boris Ruchkan, a Wisconsin man who claimed the sect was holding his college-aged daughter Viktoria against her will.

In 1992 Lian’s flock publicly kicked him out of the church. The disgraced sage then left Mendocino to lay low with family back east. Currently, his exact whereabouts are unknown. The dramatic expulsion led remaining Spinners to form a new non-religious commune. Dropping the word “church” from their name they transformed into The Family Of Unlimited Devotion. Their farm eventually became sole property of Dulaney once The Spinners' handmade clothing line (their only means of steady income) went out of business.

As ugly as the Lian debacle was, it could've been more tragic had it transpired within any other subculture. In Jesse Jarnow's Heads: A Biography Of Psychedelic America, the writer summarizes the Church's problems and how they were resolved thanks to the Deadhead community's distinct strengths: “The Spinners’ demise is a testament to the anti-authoritarian, anti-dogmatic common sense implanted at the deepest level of the Deahead mind.” Rumor has it one ex-Spinner went on to establish a Doctors Without Borders-type non-profit health care organization. The rest of the “spiritually homeless” were last heard from in 2011 when an oblique Spinners Facebook profile popped up. Its “About” section contains an ominous caveat: “TNS (The New Spinners) does not support mind control or that person who almost ruined spinning for all of us.”

Conceived as a grand metaphysical party that brought B’Hai-esque multi-culturalism, dance rituals, and Grateful Dead fandom together, The Church Of Unlimited Devotion tried to remedy the blight of trustafarian emptiness. It grew to be a destructive embarrassment that's probably better off forgotten.