I’m not in his orbit anymore, but Matt Drudge is still a star. 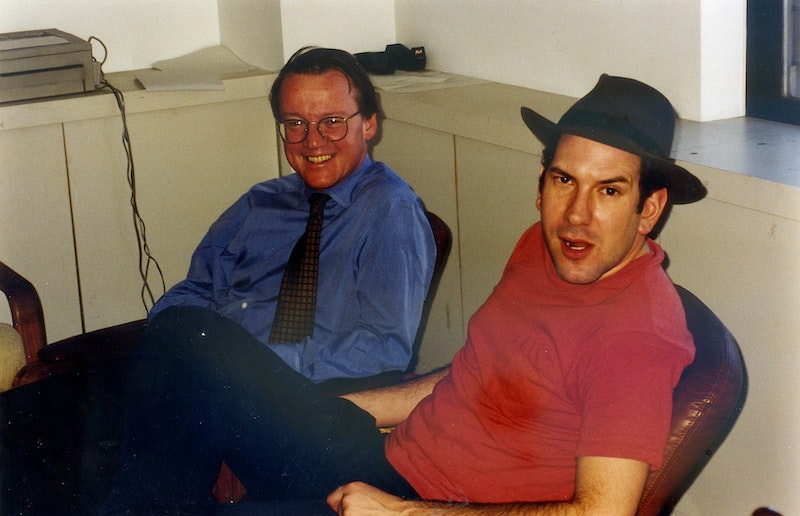 On rare occasions I’m asked what led to the falling out between Matt Drudge and New York Press, the Manhattan weekly I founded in 1988 and then sold on Christmas Eve 2002. Matt and I were pretty good buddies for several years—he had a lot of friends and admirers, so that’s not really a feather in the fedora I never wore—and we met many times; in Miami (his home), at a conservative convention in the late-1990s in, I believe, Phoenix, and at the NYP offices (picture above, taken by Michael Gentile). The rift occurred in 2002, when NYP ran a column questioning Matt’s sexuality, not a particularly original query at the time, but it rankled Matt that one of his allies printed such a story.

It was a mistake: hewing too vehemently to my editorial philosophy that writers be given maximum freedom—aside from potentially libelous statements, blatant anti-Semitism, or racism—I pondered the column in question, signed off by two other editors before it reached my desk, and overestimated the relevance of our story. It was a hectic time in NYC, with the effects of 9/11 still ravaging small businesses, along with my growing feeling that print would, in several years time, give way to the Internet, but even before I heard from Matt, I knew I’d blown it. That happens when you run a newspaper, and the hope is that successes outweigh the blunders. (By the way, this is by no means an attempt to curry favor with Matt; I doubt he’ll even see this story. Some bridges are never re-built.)

As everyone in the newspaper industry knew a generation ago—at least those who weren’t compromised by self-importance, which, when I think about it, covers most of the field—no matter how robust the “Chinese Wall” separation of editorial and advertising is at papers that pride themselves on independence and integrity—it’s not always black and white. At New York Press, despite our carnival of editorial content and illustrations, we were very firm. A new salesman, for example, might try to schmooze a writer or editor, thinking he could get some favorable coverage for a client, but was always told, “Fuck you, Charlie.”

I do recall one exception: in our annual “Best of Manhattan” issue—always the fattest of the year, running some 292 pages or so—in 1998, one of our “Bests” was a 100-word blurb with the headline, “Best Place to Get Treated Like Shit.” As it happened, it referenced an advertising client that spent $100,000 a year with the paper; I conferred with an editor and said, “This is a item we should lose, not worth the price.” He readily agreed, and no one was the wiser.

That’s enough background, and I won’t even get into Drudge’s recent about face against Donald Trump at the beginning of the COVID-19 pandemic. I do check his site from time to time, but my trust in media of almost of any ideological stance has eroded so greatly that, with the exception of The Wall Street Journal (and that institution, like other newspapers, has seen better days) that I don’t know what to believe anymore, and that’s not an uncommon dilemma, at least to people who refuse to take succor by reading only publications/websites that conform to their own views.

I was telling my son Nicky last weekend that for a brief time in the late-1990s, before us “print” men and women recognized our imminent marginalization by the Internet—first classified ads, and then the rest—it seemed like we had it all. Quality weeklies were stuffed with ads, allowing for a lot more content; upmarket dailies were still in double-digit profit margin territory; and magazines were bursting, particularly the short-lived tech-oriented titles, like The Industry Standard and Wired.

To me, Drudge was the most exciting journalist to come along in ages—and he could retire tomorrow and his reputation as a New Media pioneer would be intact—and by chance, he saw a copy of New York Press one day in 1997, which included favorable comments in my column MUGGER, and contacted me. We hit it off immediately—the Clinton/Lewinsky scandal soon followed—and we’d use AOL’s Instant Messaging to “talk” to one another. “You’re on fire,” he’d say, perhaps referring a Christopher Caldwell column, and I’d return the compliment by mentioning one of his headlines of the day. He generously added links to New York Press, MUGGER, and Taki (who wrote for the paper at that time; along with a stable of writers whose salaries he paid), and as you might imagine the boost in interest was instantaneous. (We didn’t talk about “clicks” back then, but our fax machines—obsolete a few years later—whirred all day, with letters to the editor, pro and con, subscription requests from Bangor to San Diego, and above all, a prominence beyond New York City.

It was a riot to read the indignation of stuffed peppers like Frank Rich—then a New York Times columnist—who called Matt “the devil incarnate of journalism” and predicted that he was a fad.

(Not incidentally, Lucianne Goldberg, a New Yorker, was also a champion of the anti-Clintons NYP, and she helped facilitate my friendship with Drudge. Her website Lucianne.com, like the Drudge Report, was an early portal to a curious batch of stories ignored by the traditional press. Vilified by the left, often in really disgusting terms, Lucianne was one of my warmest acquaintances of mine at that time. Her late husband Sid was a joy to be around, and on the several occasions my wife and I dined with the Goldbergs it was always a blast: Lucianne smoking, eating red meat, drinking cocktails and telling the best yarns in town.)

When my family went to Miami twice in 2000—we stayed at the hotel of the moment, the Delano at South Beach—Matt visited a few times, horsed around with my then-young sons, and we’d chat for a couple of hours. A real gentleman, he made sure to include my wife in conversation, even though she wasn’t (and isn’t) at all political, and it was all pretty magnificent. The second visit was in the middle of the Bush/Gore re-count mess, that ongoing drama that perhaps seems quaint by today’s standards. Matt was sure, citing unnamed sources, that Bush would prevail, and since we both preferred him to the odious Gore, it was uplifting chatter.

I assume Matt’s financially comfortable today, and still whipping up enthusiasm with his sirens and headlines. Despite a rift that’s unlikely to heal, I wish him only the best, and look back at our exciting association with happy nostalgia.