Disunited from the Beginning

America has been squabbling tribes for centuries. 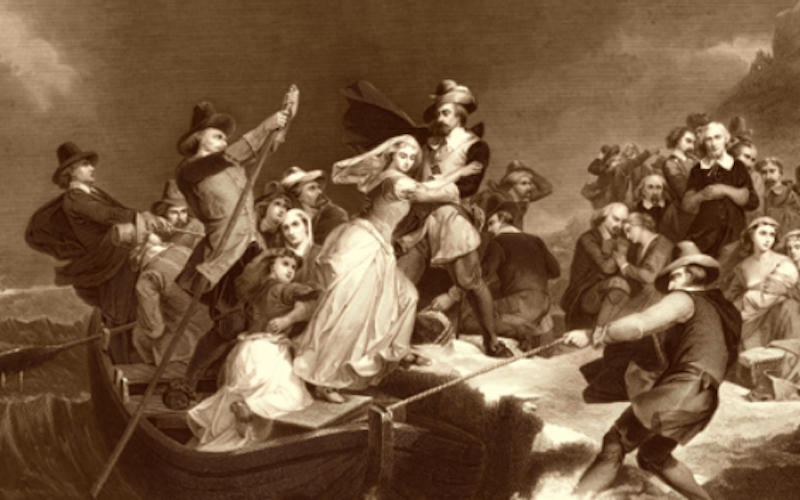 And so, this week a completely happy and unified America celebrates the 400th anniversary of the Pilgrims’ 1620 arrival in Plymouth, prelude to the nation’s formal founding 156 years later.

Then again, many people like me would be happier to start the counting in 1607 with the less-permanent but more-capitalist founding of Jamestown. That would be less embarrassing than my own family roots, which apparently stretch back at least to a William Seavey who arrived in the New World about a decade after Plymouth to use taxpayer money to build a church, a high municipal priority in those days. Being an anarchist and atheist is my way of atoning for his wrongs. Being a strict adherent of property rights also enables me to compensate for the crimes of century-ago Great Lakes pirate “Roaring Dan” Seavey.

But then, through no fault of my direct ancestors of which I’m aware, there were slaves here in the New World in 1619, which some will tell you invalidates any claims to moral decency throughout the whole country forever, even if you insist one isn’t responsible for the crimes of relatives or ancestors.

Some really ambitious “scholars” will try to convince you that slavery having existed also somehow invalidates capitalism, despite capitalism existing throughout the world and being practiced by people of all hues—with most capitalism having no connection to slavery. The most overtly anti-capitalist contribution to the widely criticized revisionist history essay collection called the 1619 Project, I notice, was by a white male millennial Princeton sociology professor who went to Notre Dame and University of Wisconsin-Madison. Figures. All guilt, no grip on historical reality.

By contrast, esteemed historian Gordon Wood told a socialist website that shares his doubts about the 1619 Project, “We all want justice, but not at the expense of truth.” (Oddly enough, it appears that apostate socialist site has suffered censorship by Google.)

But this isn’t just a nation of feuding ethnic tribes, rapidly multiplying genders, and a growing tendency for political factions to fight like street gangs. Only now, with Trump apparently on his way out, can I easily remember, as if emerging from a four-year fog, what it was like before his arrival—and thus remember that I, like many Americans, already thought virtually the entire population is idiotic. We were right. Nothing has really changed, then. The drooling savages have listed mindlessly a bit to the left instead of the right this time, but they’ll always be wrong.

So be it. The resulting government has zero moral authority now, just as it had none for the past four years and for centuries before that. Only admitting that provides even the slenderest of threads potentially leading us to freedom. The people who preach to you about government embodying “the will of the people”—or even the humbler ones who preach about “a minimal state entrusted only with guaranteeing our basic freedoms”—are con artists on a par with priests. One day this world may be rid of them all, as it now is of cotton-plantation slave owners—and by now should be of monarchies.

To facilitate more rapid movement toward the secession of various parts of the United States from the various other parts with which they disagree, the best way to avoid mutual enslavement, people of all political stripes probably ought to cheer things like this year’s court decision giving more legal autonomy to vast Native American reservations in Oklahoma. I say let the reservations become truly autonomous countries, which would be a great victory for ethnic social justice, decentralization, and—if they’re allowed to buy and sell whatever they want in their casinos—free markets as well.

A former U.S. president might even be able to get a sweet gig running one of those casinos and make a small nation-within-a-nation great again, righting the wrongs of history while telling DC to keep its hands off his operation once and for all. That Great Dissolution, far more to be hoped for than the recent urban planning micromanagement dreams of a COVID-induced, monolithic “Great Reset,” might at last allow cantankerous Americans to go their separate ways in peace.

In the meantime, some of us had to listen with worry and a sense of alienation to the endless howls of mindless ecstasy on the Upper East Side of Manhattan once word came on Saturday that Biden appeared certain to win the presidency. The unopposed, near-unanimous yowling liberals of one of the world’s richest zip codes clanged on their pots and pans for hours, hollering to the sky in unison as if there were nothing but politics in their empty, meaningless lives. Church bells rang. People who probably can’t name all three branches of government cheered, more for their ringmasters at CNN than for Biden, as some ill-defined and poorly understood darkness purportedly lifted itself from their wretched little souls.

“Where is ‪Joe ‪Biden calling on the massive Super Spreader events held in his name to end?” tweeted the White House’s Kayleigh McEnany futilely, flummoxed by the immense assembled crowds, including among their ranks the likes of Mayor de Blasio and Sen. Schumer, once more temporarily immune to the COVID they claim the rest of us have cavalierly dismissed, as they were for a month or so during the George Floyd riots, before Science’s will was once more active upon the Earth, its mighty judgment having been only temporarily held at bay by the rival god Social Justice, amen.

But how many of these sorts of rule-flouting revelers will be put in prison by President Kamala Harris before all this is over, I wonder? We all know Biden won’t last long.

And to quote Lara Bazelon, law professor and former director of the Loyola Law School Project for the Innocent in Los Angeles, from her January 17, 2019 piece in The New York Times, “Harris fought tooth and nail to uphold wrongful convictions that had been secured through official misconduct that included evidence tampering, false testimony, and the suppression of crucial information by prosecutors.” This is the brute force and amoral power for which self-proclaimed “liberals”—and no small number of turncoat “conservatives” and even “libertarians”—now vote, celebrate on Twitter, or cheer in the streets.

Those arrivals in Plymouth 400 years ago thought themselves such a tightknit and family-like little divine compact that they barely needed to think through such questions as whether they should have more than one church and whether perhaps William Seavey shouldn’t be using the public till to pay for it, since nearly everyone seemed to want the same thing.

That illusory harmony wouldn’t last, and no one today, in a country 330 million inhabitants larger, should be clanging pots and pans, writing TV news scripts, or performing late-night comedy sketches under the delusional pretense we’re all on the same page now. America is at best an ongoing shaky truce. Don’t ask more of us.