A week after Pfizer’s perfectly timed “miracle” announcement, the media and world’s masters remind us to be afraid, very afraid as we head into this “dark winter.” 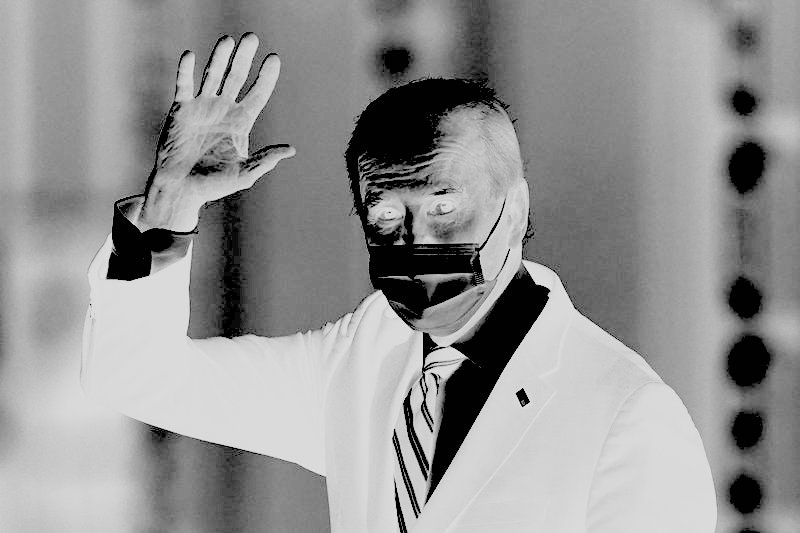 Joe Biden became President-Elect on Saturday November 7, 2020. Who knows how many babies named “Reagan” and “Barack” and “Hillary” and “Ruth” were conceived in this country? How many “John”’s? Pick your sicko—McCain, Kelly, Roberts. There’s an infinite staircase of Johns in the Capitol waiting to get in and get off. Donald Trump is stalling his inmate’s walk across Media Death Row in the last few days he has left to prove voter fraud in half a dozen states. All elections in America are determined by which side does the better rigging. The GOP has been playing the long game for decades: nominate hundreds of judges and pour money into local elections in order to maintain control at the root. Their vertical integration has led to monstrous voter suppression and gerrymandering, and they’ll likely win in the end because they understand power and time better than the Democrats.

But the DNC has technology on their side: whether it’s “Shadow,” or “Dominion,” proprietary voting systems with questionable ties to people involved in the campaigns they tabulate, you can depend on these counties to deliver astonishing results: 100 percent for Pete Buttigieg here, 100 percent for Joe Biden there. And yet, all of the down ballot races are marked for Republicans. How could this be? Well, it don’t worry me—as long as the right party benefits. For now, in the middle of November 2020, the DNC appears to have eked out an embarrassingly close win against Donald Trump with a barely conscious Joe Biden, and the circle begun on November 7, 2000 finally closed, 20 years to day since George W. Bush successfully stole his first presidential election.

Used to be you could have a beer and steal an election with a guy from the other side—America’s just not what it used to be.

Now what? Trump will surely be a sideshow for a bit, but I predict that he’ll fade away to the netherworld that Sarah Palin sank to shortly after her ignominious run with John McCain in 2008. After resigning as Alaska’s governor in the summer of 2009, Palin did nothing. Trump will do the same: he never wanted to be president in the first place, and assuming he isn’t stuck in court or prison for the rest of his life, I imagine he’ll want to lay low and, as The Eagles sang, take it easy. His twilight years won’t be pretty, but of course he has no concept of “twilight years” because he doesn’t believe he’ll ever die. Trump will be rehabilitated when he dies, like most American presidents, and the hysteria of the last four years, all the inaccurate descriptions of the former game show host as a “fascist” will be forgotten, and he’ll be remembered fondly as a man who “told it like it was” and “gave us all a good shaking up.”

And I’m sure they’ll mention that he didn’t start any new wars. That’ll be an anomaly in no time—which country is Biden going to bomb first? Does anyone want to bet on the continent? Some say Iran but I say somewhere in South America. You never know!

The Associated Press ran this on Saturday: “Joe Biden faces a decision unlike any other incoming president: whether to back a short-term national lockdown to finally arrest a raging pandemic.” As if the coronavirus is a drunk Phillies fan. And then this, a day later: "Trump, without using Biden’s name, tweeted that 'He won,' something Trump had not said before publicly, though he said the Democrat’s victory was only 'in the eyes' of the media.'"

The Trump tweet they're referring to: "He only won in the eyes of the FAKE NEWS MEDIA. I concede NOTHING! We have a long way to go. This was a RIGGED ELECTION!"

What's so infuriating about the AP's wild misrepresentation of what Trump wrote is that this kind of distortion is unnecessary. Trump's tweet is insane on its face. Why hide his rants behind warnings and intentionally obscure reporting? If your longterm goal is to restore public trust in the media, how could you do something like this? That AP report gives credence to Trump's claims of "fake news," and you can't give him an inch. Like the DNC, they're either incompetent or operating with ulterior motives. Both scenarios are frightening. Anyway, the guy is going to be out of office in a matter of weeks, let him post his dick or PornHub playlists. That could be an activity for the transition team.

More ominous were comments from Michael Osterholm, who I first heard on The Joe Rogan Experience early on in the pandemic, a person who stressed that this would last for years, not months: “But the debate has been livelier among members of the coronavirus advisory board Biden announced this week. One member, Dr. Michael Osterholm, suggested a four- to six-week lockdown with financial aid for Americans whose livelihoods would be affected. He later walked back his remarks and was rebutted by two other members of the panel who said a widespread lockdown shouldn’t be under consideration.”

I thought Biden personally approved the Pfizer vaccine. Doesn’t it come stamped with “NO MALARKEY?” The rest of the article outlines how scattershot and dysfunctional the Biden transition team is already, 100 cooks in the most dangerous kitchen in the world. A government by billionaire committee is surely more stable than Trump’s “Modern Day Presidential,” but it’s certainly scarier in the long-term.

These are people who advocate euthanasia past the age of 75 and yet can’t get on the same page with public statements. Why do so many public officials act like they’re planning a surprise party when they talk about coronavirus? Sometimes people “slip” and everyone gets nervous. Why was Osterholm read the riot act? Was the length of the lockdown suggestion absurd or the additional stimulus payments? Well, probably both, even if they would both definitely work. What is this? “Modern Day Presidential?” No, something much worse.