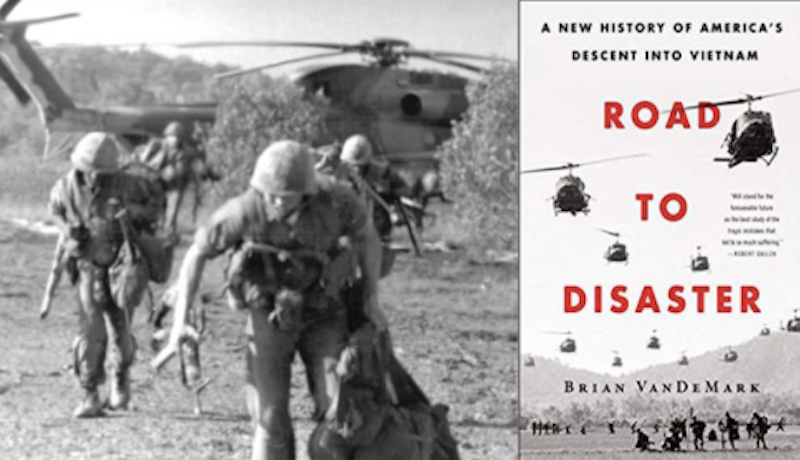 One of the clearest truths of America’s war in Vietnam is this: the men who planned it got a lot terribly wrong. Many Vietnamese and Americans died in consequence. Brian VanDeMark’s recent book Road to Disaster: A New History of America's Descent Into Vietnam describes what the war planners got wrong, while questioning what led to those errors. Given that the American decision-makers weren’t idiots, and weren’t monsters—that is, given that they put value on human life—how could the war have led to such a death toll? How could the United States have lost? And given that the loss had so little geopolitical consequence, why did they think the conflict mattered so much?

Road to Disaster looks at the bad assumptions made by the Kennedy and Johnson administrations, and tries to use modern psychological theories to explain how intelligent men could’ve made such disastrous miscalculations. The result’s an odd mix. As history, it’s a very good Washington’s-eye view of the war through late 1968. As an attempt at deeper analysis, using 21st-century cognitive science, it’s shallow. The book succeeds anyway, because, psychology aside, it’s a strong description of the characters of the men who decided to make war and why they made the bad decisions they did.

This isn’t entirely surprising. VanDeMark was a research assistant to Clark Clifford (chairman of the President’s Intelligence Advisory Board in the mid-1960s and Secretary of Defense in 1968 and ‘69) for the 1991 book Clifford wrote with Richard Holbrooke, Counsel to the President; he then worked with Robert McNamara (Secretary of Defense from 1961 to 1968) on McNamara’s 1995 memoir In Retrospect: The Tragedy and Lessons of Vietnam.

Inevitably, VanDeMark plays favorites, writing the book largely from the perspective of McNamara and Clifford, if not Kennedy and Johnson. Other American perspectives, such as those of the military, tend to be sidelined. Still, on the whole, the insights VanDeMark gets from his familiarity with the former Secretaries make up for this. And Vietnamese attitudes are effectively incorporated into the book, showing the realities of what was happening in the war and the effects of American policies.

The book’s prose is solid on a sentence level, though some phrases are repeated; it seems everyone in Washington had a “cavernous office.” Paragraphs, on the other hand, tend to sprawl for a page or more, and wander from one idea to another. Long chapters are similarly formless—nominally structured around one particular cognitive error (“The Peril of Short-Term Thinking,” “The Hazard of Sunk Costs”), they don’t on the whole stick to any particular theme.

This isn’t entirely bad, as VanDeMark does present a clear chronological outline of the war up to late-1968. Perhaps the best moment for his use of cognitive science comes with his inclusion of the Bay of Pigs fiasco and the Cuban Missile Crisis in the story of Vietnam. Here VanDeMark makes a convincing case that certain flaws in the way the new administration viewed the world were alternately made evident (in the first case) and then validated (in the second). Kennedy’s approach to Cuba primed him and his country for increasing military involvement in Vietnam.

Road to Disaster’s use of modern psychiatric ideas is otherwise mostly shallow, sometimes devolving into the jargon of management-speak. It’s fine to talk about “good stubbornness” versus “bad stubbornness,” but unless you have a failsafe way to tell which is which, it’s a distinction that only becomes clear in retrospect. VanDeMark discusses the ways in which people fool themselves into believing that they know more than they do, but doesn’t really specify why this was more of a problem with Vietnam than any other policy issue.

One may reasonably wonder whether the book is an exercise in dispelling fault from Kennedy, McNamara, and company. If the mistakes they made were failures that anyone would’ve made in their place, if the mistakes grew from inherent psychological processes, then how could they be expected to have done better? In this interpretation, the Vietnam War and the way it unfolded was inevitable.

This isn’t convincing because there were too many mistakes made by the United States in Vietnam, from the conception of the situation to the strategy. VanDeMark does a good job chronicling these various errors, starting with the Americans belief that the fall of Vietnam to communism could lead to a wave of communist governments taking power in the region. He shows how racism played a role in the American belief that the war could be easily won, and describes various reasons why the Americans had a misguided belief in air power and bombing raids. He demonstrates how escalating the conflict by sending ground troops led to a larger reaction against the American forces, and shows how specific incidents, like an alleged attack on an American ship in the Gulf of Tonkin, were misinterpreted.

He describes what happens and how the men at the top of the American hierarchy felt about it. He doesn’t write much about imperialism and colonialism. That’s notable because while these things were not a conscious part of American policy, they did form part of the unconscious underpinnings of the policy; they led the American establishment to assume they had a right to intervene in Vietnam, and that they could do so easily. If this material had been handled slightly differently, then, the cognitive science aspect could’ve been used not to show how intelligent men could be so wrong, but how they could convince themselves they were in the right even while ordering death and destruction in a foreign country.

The book does try to explain how so many smart men could manage to not see what was right in front of their faces. VanDeMark describes the basic problem with the war: American forces could not stop the flow of men and material from the north, and were unwilling to invade the north since they feared (correctly) that would bring China and possibly the USSR into the conflict, potentially triggering World War III. This helplessness was what the American leadership simply could not process, and VanDeMark does present some reasons why.

That works because on the whole he has a feel for the characters he writes about. He understands them, McNamara and Clifford most obviously, but Johnson as well and even Westmoreland (to whom he is less sympathetic). He clearly presents what they were going through at any moment, and so the psychological assessments make sense. Does he exonerate them from any imputation of incompetence? Ultimately, I don’t think so; he describes the reasons why they made mistakes, but one can’t escape thinking that their jobs were to not make those mistakes. VanDeMark does not explicitly fault them for their errors, but implicit in Road to Disaster is the knowledge that other options were available.

The book’s a useful history. It doesn’t have the explanatory power it hopes for, but it does describe the stresses on and within the American war leadership—including domestic political pressures (it’s often forgotten that the country was largely pro-war and indeed pro-escalation for most of the 1960s). As is often the case, the attempt to describe psychological processes in contemporary jargon is less convincing than simply showing character in action. Attempting to write a history based in 21st-century cognitive science, VanDeMark’s instead created a book that justifies 20th-century conceptions of the significance of the individual human character. There’s nothing wrong with that at all.