William Barr and the Subversion of Justice

This display of absurdity exceeds all expectations. 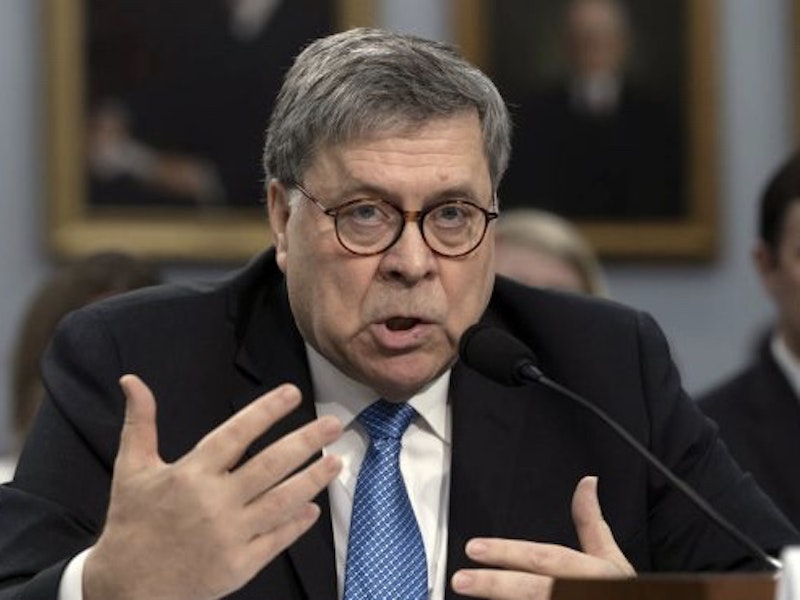 One thing I’ve always loved about James Ellroy’s crime novels is that they’re as unreal as Harlequin romances. Where Harlequin has windswept cliffs, muscle-bound aristocrats who have the souls of poets, sympathetic protagonists with whom the reader can identify, and dependable happy endings, Ellroy goes to the opposite extreme.

He writes against a backdrop of urban blight and ubiquitous corruption, populating his terrain with vicious, craven misanthropes. His damaged anti-hero protagonists do one horrible thing after another—sometimes because they have to, other times because they want to. And they usually finish in the most cynical, pessimistic, violent ways possible. By the end of an Ellroy novel, you feel grateful that you lead a simple, non-felonious life.

I used to think his amoral hyperbole was good fun, an exercise in genre extremism, Jim Thompson or John D. MacDonald cast in Vantablack. When I was in college, discovering noir and hardboiled crime writing, I thought Ellroy’s dark worldview should be seen as nothing more than an aesthetic choice—perfect for perverse stylized fairy tales about crime in the big city.

His novels are so lacking in redemptive vision that they verge on the unbelievable, the allegorical, even the weirdly nostalgic. After all, in real life, not everyone is cynical, ruined, and corrupt; though some may find it seductive to imagine the “bad old days” when cops openly braced suspects, freely planted evidence, and made certain people disappear—not because the cops or the criminals were necessarily right or wrong, but because the world was a brutal place and That’s What They Had to Do. So goes the Ellroy romance. But surely that’s not real.

We tell ourselves that’s nonsense. We choose to believe that most people make at least a fleeting effort to do the right thing. We think cops shouldn’t break the law and hope they don’t. And we want to believe that our government and legal system is not collapsing under the weight of its own dry rot. But after William Barr’s show of bad faith before Congress, I’m beginning to wonder whether Ellroy wrote the plot.

Realpolitik and hardboiled romance collided on Capitol Hill for the second day in a row this week when our leering, dishonest,Tom Bosley clone of an AG gave direct credence to Trump’s Deep State conspiracy theory, saying he believed spying on the Trump campaign did take place. Barr added he feels a need to look into it in order to make sure that government power is not being abused. He said this with a straight face.

In a time of political amazement, when it seems anything can pass the laugh test and enter our national discourse, this display of absurdity exceeds all expectations. We knew Barr was dirty. But we didn’t know he was James Ellroy dirty. He’d be a pathological scheming Howard Cunningham if Happy Days was rewritten with White Jazz as the series bible, or maybe with one of the non-sequitur scenes from Ellroy’s Rampart—the moral equivalent of Woody Harrelson grinning at the walls of a hotel room after doing something horrible to the woman in the bed. After this sham testimony, there can be no redemptive vision in Barr’s worldview, only redactions, facetiousness, and rule-obsessed obfuscation.

He’s grinning these days. But his feigned belief in Trump’s Deep State whataboutery does nothing to hide the fact that he was brought in as the most potent form of damage control possible. He knows it. Congress knows it. Non-stupid Americans know it. And the psychological fallout it’s creating, not only in the government and the media, but in everyday people, can only indicate systemic dysfunction at the highest levels, as if we didn’t already suspect it. How long can this go on? Forever? I doubt it.

In a talk given at Georgetown University on March 19, 2019, Nigerian-American journalist Dayo Olopade defined “corruption anxiety” as "the knowledge that society can be and has been manipulated to favor the powerful at your expense." Now at least we have a term for it. Olopade’s talk was called, “Lessons in Democracy,” and it was advertised as covering “what besieged world democracies can learn from Africa’s experience of authoritarianism and resistance.” But there isn’t a country on earth that doesn’t inspire some degree of corruption anxiety in its authoritarianism and as a result of its people’s resistance. Axios’ Felix Salmon observes, “Western countries are generally perceived as less corrupt than most countries in Africa. But perceptions don't always mirror reality.” Corruption and the anxiety it produces is fairly universal.

However, Barr is offering us something special. He’s deliberately disregarding the earlier open-and-shut Inspector General’s investigation. And he’s disguising a retributive foray into President Trump’s enemies list as his own inquiry into illegal campaign surveillance. This must generate an abnormally large degree of corruption anxiety in any reasonably intelligent person, since it’s such an exquisitely shameless and overt attempt to redirect attention and subvert the course of justice that the sheer unreal romance of it takes your breath away. It’s abundantly clear that Barr has resurrected this baseless conspiracy theory to open the possibility for Trump getting some payback.

Even Jim Thompson wouldn’t write this. He wrote The Grifters because he was going for at least a shred of realism. Now the Department of Justice has begun to seem more like the LAPD bureaucracy in LA Confidential: nothing good or honest can happen there, only gradations of bad, with the worst yet to come.