There won’t be a revolution within the Church any time soon. However, there is still hope. 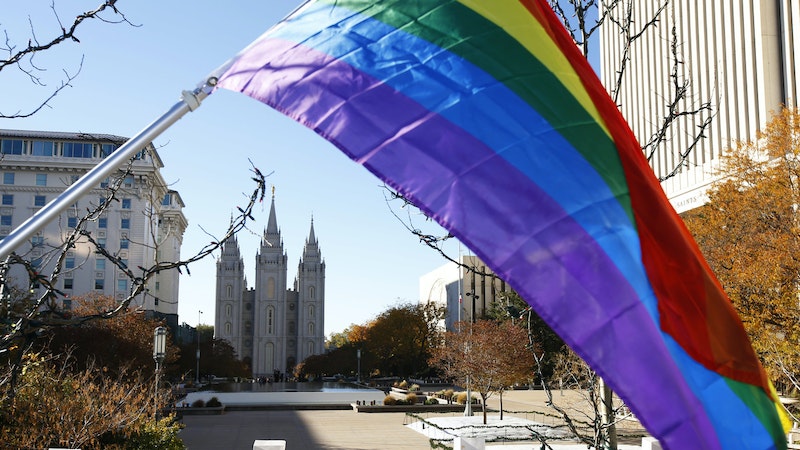 Last week the Church of Jesus Christ of Latter-Day Saints (LDS) announced they’ll now baptize and bless children of LGBTQ parents, and will no longer classify same-sex marriage as apostasy in their leaders’ handbook. The new policy, announced during the church’s 189th Annual General Conference, is a reversal of the 2015 Policy of Exclusion (POX), which excluded LGBTQ families from church ordinances. This is surprising given the Mormon church’s long history of being anti-LGBTQ. I wonder, though, if the Church is really changing its mind about LGBTQ issues, or if it’s just playing lip service to look more liberal.

Ex-Mormon podcaster Bryce Blankenagel says it’s the latter. “The pressure that moved the tide was all the advocacy groups and social media outcry since the [POX] policy,” the Naked Mormonism podcast host told Splice Today. The POX sparked a huge backlash in 2015 where thousands of Mormons publicly announced resignation from the Church. “Online communities have been hurting a lot these past 3.5 years,” Blankenagel says, “and the church has seen the damage caused which they never could have anticipated.”

While no one knows why the Mormon church changed its mind about the POX, Blankenagel thinks it might have to do with a hate crime law recently passed in Utah. According to the Associated Press, this new law “creates stiffer penalties for people convicted of targeting others because of their sexual orientation, race, religion or other factors.” The AP notes the Mormon church publicly announced it didn’t oppose the bill, despite some concerns at first about whether it would infringe upon religious liberty. “It looks really bad to have this bill go through while touting a policy that explicitly bans LGBTQ+ people and their children from participation in church ordinances,” Blankenagel said.

It’s important to note that the Mormon church still believes in traditional gender roles and that marriage is between a man and a woman only, so they’re not fully LGBTQ-affirming. The church just no longer classifies being LGBTQ as apostasy, according to a public joint statement from three leaders of the Church. Because of this, as Emma Green of The Atlantic says, “LGBTQ Mormons occupy a fraught space in LDS life” where they are treated like family within the Church, but still condemned to hell.

Many feel the Church’s new policy is too little, too late. “The POX created more trauma and exacerbated that hideous wound,” Holly Welker of Rewire writes, “in part because it has the same roots [as polygamy]: deifying white heterosexual male sexuality and making it the universe’s organizing principle.” The Church has a well-known history of not just anti-LGBTQ bigotry, but also racism and sexism, all three of which is backed up in the Book of Mormon. Mormonism has always privileged white cis straight men over everyone else.

As Welker explains, the LDS church teaches that while prophets cannot be infallible, God cannot allow prophets to lead Mormons astray, which makes accountability within church leadership nearly impossible. “It’s not merely right but righteous to hold these men accountable for how they’ve administered their stewardship,” she writes. “They owe it to us all to do better, and to lead by example when it comes to repenting and saying, ‘I’m sorry.’”

Blankenagel agrees with Welker. “The actual mind change will take generations to filter into the top leadership,” he said. The leadership of the LDS church is still comprised of elderly white men who grew up within traditional conservative church doctrine, so there won’t be a revolution within the Church any time soon. However, there is still hope. “These small changes in policy will hopefully set the stage for doctrinal shifts in a decade,” Blankenagel says, “and cultural shifts in the decades after that. This one small battle has been won, the war is long from over for LGBTQ advocates.”