Hear the lamentations of their women. 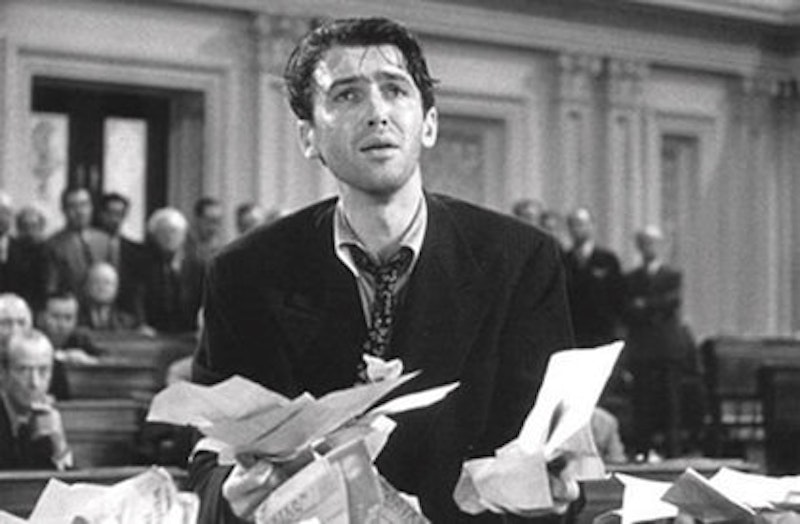 After a decade or so of utter dysfunction, the Senate looks like it has finally decided that it might be a good idea to rework the filibuster so you don't need a 60-vote majority to go the bathroom. Jeff Merkley (D-OR) has one of the most discussed plans, which is based on forcing minority Senators to actually stand up and hold the floor when they want to filibuster a bill, the way Mr. Smith did in that Frank Capra film. Senate Majority Leader Harry Reid appears open to the idea, not least because, as Huffington Post reports, when he goes around the country he hears from Democrats low and high that they want to force those Republicans to "actually filibuster!"

If you don't know much about how the filibuster works, the prospect of obstructionist Senators swaying giddily on their feet, growing hoarse, and/or actually collapsing jowls foremost onto the hallowed floor of the Capitol in a dead faint has some obvious appeal. If you do know anything about the filibuster, though—then you're like Jonathan Bernstein, who has been declaring over and over that real-talk filibusters are an idiotic idea. As he says:

Here’s what would actually happen in a talking filibuster. Republicans would take to the floor and start arguing for the bill. Fox News, Rush Limbaugh and the rest of the Republican-aligned media would treat them as heroes… Republicans would be stacked up in line to deliver ringing denunciations of the offending legislation.

This is not a difficult argument to understand. Politicians like cameras. Ergo, you don't stop politicians from talking by pointing cameras at them. A live filibuster grinds the Senate to a halt while the minority soaks up free publicity indefinitely. A Senator who falls to the floor martyring his quivering jowls in the name of (for example) sinking Obamacare… that Senator is going to get a tremendous boost to his public career. This isn't four-dimensional chess; it's basic common sense and it's why, as Bernstein says, the Senate majority leader doesn't force talking filibusters even though he has the right to do so whenever he wants under current Senate rules.

In other words, a talking filibuster isn't even a reform. It's just a reiteration of the rules we already have, and which we already know don't work.

So what's going on? Are people really that stupid? On the one hand, the answer is that they probably are. But in addition, I think that the romance of the talking filibuster probably is closely linked to the partisan lizard brain and what it whispers to itself about political victory.

Remember back during the primaries when Republicans were ecstatic at the idea of Newt Gingrich debating Obama? The meme was that Gingrich would be hard-hitting and brilliant; that he would attack relentlessly and expose Obama's stuttering incompetence and failed policy record.

As it happened, Mitt Romney won the nomination, and did beat Obama in the first debate—by tacking to the center and vociferously repudiating hard-core Republican positions. In other words, he did exactly the opposite of the hoped-for Newt nuking. It's hard to escape the conclusion that had Newt ever gotten the chance to do his firebrand schtick in a national debate, the result might have been something of a disappointment to the faithful.

In both the filibuster debate and the dreams of Newt transcendent, the baseline assumption is that the opposition is so clearly stupid/corrupt/invidious that all that is needed to win the political battle is to expose them for the fools and crooks they are. Thus, Newt will disgrace Obama if we can only put a camera on them; thus, the Republicans will disgrace themselves if we only make them stand up and talk long enough. The hope is not merely for political victory, but for political vindication—a stinging, public, irrefutable acknowledgement by friends, neutrals, and especially enemies that those enemies are repulsive and ridiculous losers. We don't want to just run the bad guy out of Dodge; we want him to announce his idiocy from the roof of the highest building in town before he is tarred, feathered, and spat upon by every living soul within a hundred miles.

In short, many Democrats seem to be approaching filibuster reform not in terms of what makes for the best policy, but rather for what constitutes the best revenge fantasy. Democracy and revenge fantasies don't often go together very well, though, which is one of the great virtues of democracy. There are various ways to reform the filibuster. I'd plump for just changing the chamber to straight majority vote, but if you'd prefer retaining more minority power, Bernstein has some clever ideas. Either way, though, partisans on both sides would do much better both morally and practically to focus more on policy goals and less on daydreams about pissing down their enemies' throats.