GOP has little to bargain with. 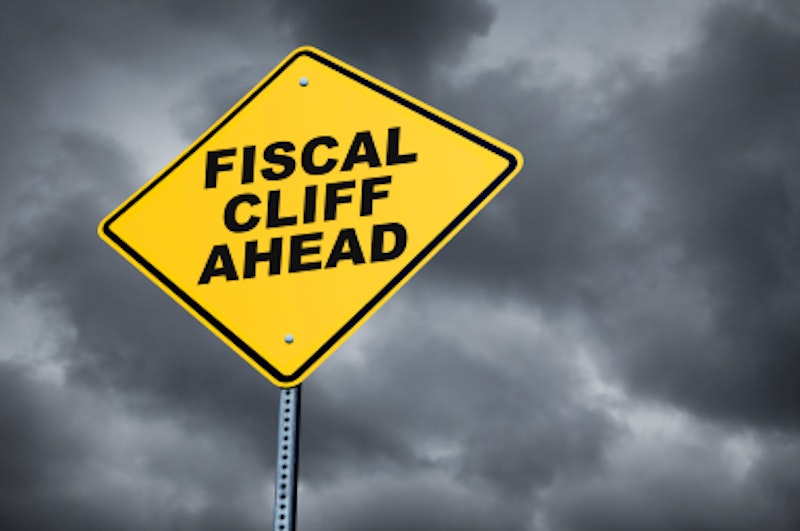 Two key elements in any political survival manual or profile in courage, from Machiavelli’s The Prince to the Art of War, are cunning and cojones—the wit to outfox the opposition and the brass to be bold and take chances. Until now, it was unclear whether President Obama suffered from a deficit of the two or simply withheld those traits from public view.

There’s an element of reassurance about reelection to a second term that gives a president confidence and swagger. Those characteristics were very much in evidence at Obama’s first post-election news conference in which he appeared itching for a fight. The question is whether Obama can sustain his new hard edge through the coming weeks of negotiations with Republicans over the “fiscal cliff,” the staggering accumulation of $500 billion in spending cuts and tax increases that will occur automatically on January 1 if no action is taken.

Obama has Republicans over a very public and awkward barrel. If Obama chooses to exercise the awesome power of the presidency and the tenacity of a hardball negotiator, he can undercut the GOP in Congress as well as Grover Norquist, the Willie Loman of the anti-tax lobby, in one decisive swoop. Obama, to be sure, has the public and the polls on his side.

View the confrontation as two political parties attacking each others’ constituencies, the Democrats picking the pockets of the tax-sheltered rich and the Republicans eating the lunch of the entitled poor. Yet the fiscal cliff is not the omen of Apocalypse that it appears to be but it is a political barrier that was artificially created by Congress.

At the heart of the deal are the Bush tax cuts which are set to expire on December 31 and would trigger massive cuts in government spending over a period of years. Obama wants to allow the cuts to lapse for those making upwards of $250,000 a year but remain for 98 percent of Americans. Republicans have steadfastly resisted increasing taxes for the wealthy and only recently have been inclined to support unidentified new revenue sources. They’re demanding cuts in entitlements. Almost every Republican in Congress has signed Norquist’s pledge to oppose any new taxes.

By resisting a deal and allowing the cuts to expire, Obama could then present a plan of his own that would cut taxes for most Americans that Republicans would be hard-pressed to oppose. Such a maneuver would force Republicans to reinstate tax cuts for the middle class, raise taxes on the wealthy and render Norquist as just another redundant lobbyist who makes a living pimping for the rich and screwing the working class. Give a loud and lusty cheer for class warfare.

Rep. Paul Ryan (R-WI), the defeated vice presidential candidate, is hardly the person to claim that Obama has no mandate, as if such a muddled concept actually exists. In one of those state election law quirks, Ryan ran simultaneously for vice president and Congress. Ryan lost his hometown of Janesville, Wis, twice—once for vice president and the other for Congress. He lost his state of Wisconsin. He lost the vice presidency. But he did narrowly win reelection to Congress. And he probably cost Mitt Romney Florida, a state populated by seniors, because of his determination to privatize Social Security and convert Medicare into a voucher system. How’s that for a mandate.

Yet every four years, the most overused word in the great bloviation of political rhetoric is the hyperbolic noun “mandate.” Usually it’s employed by the losing side to neutralize the ability of the winner to govern. Obama, despite the negative claim of the GOP, won a decisive victory in the popular vote and a landslide in the electoral college.

Ryan argued that Obama lacks a mandate because “voters reelected House Republicans.” But Obama insisted, though almost submissively, that he has a “mandate” to help the poor and the middle class.

Despite the claims of both parties, a mandate is an elusive, almost non-existent state of mind that is often confused or conflated with popularity. It’s true that Republicans retained their majority in the House, but that was mainly because of gerrymandered Congressional districts in the majority of states that Republicans control. And it’s equally true that Obama is the first president in over two decades to win two elections with more than 50 percent of the vote.

But a mandate is not like a money market account that allows a president to drawn down as political currency is needed. So the only true mandate in Washington is this—218 votes in the House and 51 in the Senate, the minimum number of votes required to pass a bill through Congress and advance it to the president’s desk. Any president who can muster a majority of votes in both chambers has a mandate to get things done, nothing more, nothing less.

Everyone knows that Mitt Romney has a tin ear for the grammar of politics. And he will forget nothing, because he’s learned nothing. He again blamed his loss on handouts from a “generous” President Obama to the Democratic cohort of blacks, Hispanics and young people. Those remarks came in a conference call to a group of wealthy contributors on top of his earlier remarks that 47 percent of the American public consists of moochers and deadbeats who rely on government largesse.

During the campaign, Romney had suggested closing loopholes in the tax code as a way of raising revenue instead of increasing tax rates. So how about starting with limited liability corporations, as in Bain Capital LLC, where Romney made his many millions. For those unfamiliar with limited liability corporations, they are a very generous, to use Romney’s word, tax dodge and a true government gift to the wealthy.

Simply, put LLCs allow capital to be taxed at 14 percent while labor (wages) is taxed at 35 percent. Here’s how they work: LLCs are an alternative to the standard sub-chapter (s) corporations and a recent entry in the tax code that may not survive an on-going IRS review. LLCs allow earned money to enter on one side of the ledger as “income,” normally taxed at 35 percent, and to be withdrawn on the other side of the books as “dividends,” taxed at 14 percent. That’s a 21 percent tax break for doing little more than lifting a pen and signing a check. That’s one reason why Romney got so rich so fast. An LLC is a government gift that keeps on giving but is not available to the average citizen who works for a living.

Politics and pulpits clashed at the polls and politics won. The U.S. Roman Catholic bishops, teachers by calling and shepherds by rank, are trapped in the toxic swirl of American pluralism, the notion that the material world and the spiritual domain can happily co-exist without intruding upon each other’s territorial claim. To wit:

The bishops stridently oppose the Obama Administration’s position on contraception, but a majority of Catholics voted for Obama; they generally oppose artificial methods of contraception, but 80 percent of Catholic women acknowledge using some form of birth control; they teach that abortion is murder, but many Catholics believe in a woman’s right to choose; they opposed from the pulpit same-sex unions, but a law granting gay couples the right to marry was adopted by voters in heavily Catholic Maryland, the seat of the church’s primal see in America, the Archdiocese of Baltimore. For their positions and their outspoken mix of theology and politics, the bishops stand accused of being agents of the Republican party, quixotic defenders of immutable values in the ever-shifting culture wars. Bishops and generals have become obsessed with sex.

More than 300 members of the U.S. Conference of Catholic Bishops, active and retired prelates, assembled in Baltimore following the November 6 elections in which gay marriage was, for the first time, approved directly by voters in three states.

Many practicing Catholics, though drifting from the bishops’ hard-line positions on matters of sex and choice and personal business in the bedroom, still regularly attend mass, pray and participate in the sacraments, though church teaching discourages the practice if not outright prohibits it. They are derisively referred to as “cafeteria Catholics,” devoted but selective in good conscience. A recent Pew Research survey shows that the number of Americans who identify with an organized religion, including Catholicism, has declined measurably.

There are basically two kinds of Catholics these days straddling an earthly line of demarcation: Pre-Vatican II, and post-Vatican II. The bishops, following the command of Pope Benedict XV1, are definitely a throwback to 1950s Catholicism. The bishops are unyielding and dogmatic in their positions. They view the problem of the faithful straying from the church’s authoritarian teaching as one of communication and plan to consider techniques that are associated with the kind of media campaign and fundraising that has been used against their homiletic dictates.

“The vote [on gay marriage] was close. We’re in a state that tends to be politically liberal, we were vastly overspent, and I came late to the game,” Baltimore Archbishop William E. Lori was quoted as saying.

American Catholics are unlike any other in the world. They are diverse ethnically and culturally and do not fit into a one-size-fits-all confessional. There is definitely a cultural class between the church and its following and the question is how long the two can co-exist without a major schism.