Department of unwanted sequels: Mitt Romney follows up on his 47% remarks. 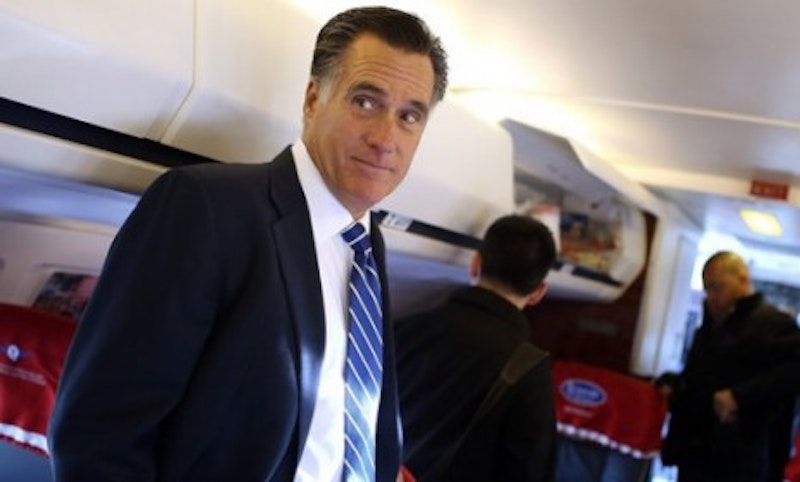 Mitt Romney suffers from a victim mentality and refuses to take responsibility for his own defeat. That's the verdict of Matt Lewis, a columnist at the conservative site Daily Caller. Having sized up Romney's post-game analysis of the election, Lewis figures the ex-candidate should maybe shut up and go away: “Romney’s argument gives Republicans permission to dwell on the problems—and a convenient excuses for failure: A perfect recipe for losing! This is bad for individuals’ souls, and it’s also bad for political parties. Romney’s theory isn’t just wrong, it’s pernicious. Here’s hoping he finally rides off into the political sunset.”

The columnist is responding to what may be Romney's last turn as a political figure. With the election done and lost, Romney did a revamp of this spring's 47% recording. He performed it on Wednesday during a conference call with some of his fellow rich people (fundraisers for his campaign), a call in which he searched his soul about running a “superb” campaign that just happened to lose. Without flinching, he zeroed in on the culprits: students, unmarried women and dark people, all of whom had “gifts” pressed into their hands by the cunning President Obama.

“The president’s campaign focused on giving targeted groups a big gift—so he made a big effort on small things,” Romney said. “Those small things, by the way, add up to trillions of dollars.” One of the biggest of those small things is Obamacare, which is targeted at no group except the American population. But Romney figures that low-income people need it the most, so there you go. “You can imagine for somebody making $25,000 or $30,000 or $35,000 a year, being told you’re now going to get free health care, particularly if you don’t have it, getting free health care worth, what, $10,000 per family, in perpetuity—I mean, this is huge,” he said. And it is, though nobody but the right says it's free.

Romney indicated that he liked what he was up to in the campaign, namely “talking about big issues for the whole country: military strategy, foreign policy, a strong economy, creating jobs and so forth.” But those issues were big before he landed on them, not after. He turned them into fear-mongering, a shell game to cut taxes for the rich, and vapid lunch-bucket posturing (“What we need is jobs, jobs and more jobs”). On Wednesday, Romney tried to shrink Obama's issues too. Take the “illegals,” as he likes to call them: “with regards to Hispanic voters, the amnesty for children of illegals, the so-called Dream Act kids, was a huge plus for that voting group.” Yeah, I guess it was, which in no way means it was the wrong thing to do.

When Harry Truman recognized Israel, that was something Jews especially liked. When he integrated the military, that was something blacks especially liked. But neither move was something that only blacks or Jews liked. In the same way, I like “the amnesty for children of illegals,” and I really like the idea that somebody making $30,000 a year can get treated for cancer or a broken leg, just like a full-fledged human being. I feel this way even though I'm legal and have medical coverage. But that's not the Mitt view. When somebody rich gets to pay a lower tax rate, that's a “big issue.” When somebody working behind a counter doesn't have to die ahead of time, that's a grubby payoff.

Gov. Bobby Jindal of Louisiana and a few other Republicans have responded to the latest Mitt episode by hinting that maybe their ex-candidate could shut up. Their big  objection seems to be that he's polluting the team's message. “Livid at Romney saying Obama won b/c offered minorities ‘gifts,”’ Tweeted a Latina talking head named Ana Navaro. “As if he didn’t alienate Hispanics enuf while running! Look in mirror, Mitt.” As far as I know, only Lewis of the Daily Caller has emphasized the mirror angle. It's his whole critique, and it's one that I think left, right and center can agree on. Mitt Romney is talking like a loser. The man who disdains the wipeouts and alleged ne'er-do-wells of American life says the odds were stacked against him, so what are you gonna do? Imagine if his father hadn't been rich.