Beto vs. Ted, Round One 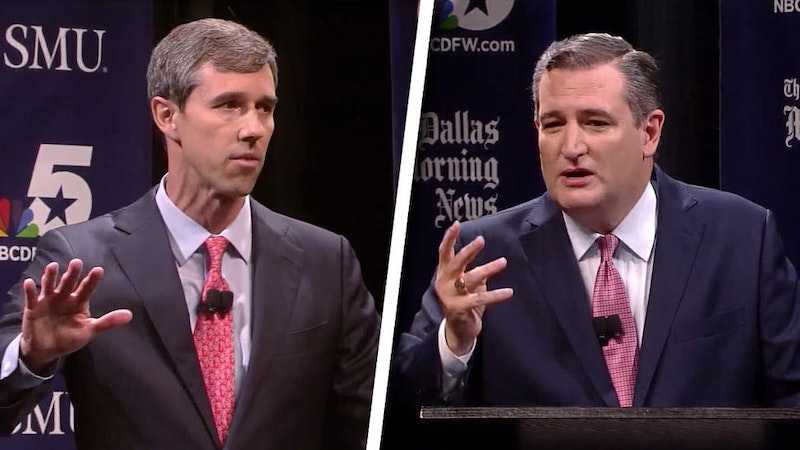 When Ted Cruz gets going, words do a dance. For instance, job loss becomes the same as jail time. A police officer says she walked into a neighbor’s apartment and shot him dead because the man didn’t do what she told him. Cruz says that Beto O’Rourke, the Senator’s opponent, is reckless because he thinks that officer really needs to be fired. She hasn’t been convicted, Cruz says. We have courts.

Moments like this recurred in the first Cruz–O’Rourke debate (two more are planned), which took place Friday night in Dallas. So did some pops to the face taken by O’Rourke. “Let me be very clear, more armed police officers in our schools is not thoughts and prayers,” Cruz said. O’Rourke had misstepped by hauling out an applause line (“Thoughts and prayers, Senator Cruz, just aren’t going to cut it anymore”) that didn’t match what the Senator had been talking about.

No doubt the blows reassured Cruz fans, if the term applies. But O’Rourke was little fazed and did well what he does: that is, gulping out long reels of words that provide a decent exposition of progressive policy views and associated topics. On Cruz’s court picks, the Dreamers, and the logistical and legal folly of the wall, O’Rourke made a lot of sense in a short time. Beyond sense, he has a gift. One hears that he’s likable. Boy, is he. He has a DWI, and he and a witness don’t agree about his willingness to stay on the scene. Not only that, but at Snopes we learn that police found a condom of white powder in his father’s car, and that the IRS landed on his mother’s furniture store for structuring $630,000 in cash. Given this Breaking Bad feel, O’Rourke still felt free to write a book called Dealing Death and Drugs: The Big Business of Dope in the U.S. and Mexico. No wonder, since to look at this boy is to see gawky innocence. Clouds don’t stick around him.

Being alongside Ted Cruz is a help, of course. For instance, Cruz announced that The Washington Post had fact-checked O’Rourke on police shootings of black kids and found him wrong. Instead the Post had found it was impossible to say whether O’Rourke had said cops were killing black kids; the article then said that, from what the facts show, black kids aren’t being shot by police at a “frightening level,” and take that term for what it’s worth. In Cruz’s mouth we have something entirely different.

But on one point the Senator deserves a defense. Fact checkers fault Cruz for saying O’Rourke said police officers “are Jim Crow.” All right, but how about engaged in Jim Crow? Dentists aren’t dentistry, but one can supply some other verb. When O’Rourke talks about organized injustice, it’s fair to ask what he thinks of the police and the other people staffing the system. More rational phrasing by Cruz would’ve placed a challenge before O’Rourke: Quick, tell the audience about systemic responsibility versus individual.

Another chance was missed just before end of debate. “True to form,” O’Rourke’s parting comment on Cruz, has some measure of salt. O’Rourke should’ve said “That’s the Ted I know.” Yes, wrap the moment about the man’s neck and chuck his chin. The moment in question was that O’Rourke, on being asked to say something nice about his opponent, had done so and left it at that, whereas Cruz had answered by saying that his opponent was very sincere, like Bernie Sanders the Socialist, who is very sincere about being a Socialist. The thought took 25 seconds to spool out, and during that time O’Rourke looked darkly at the Senator’s mouth. Then: “True to form,” Beto said. He spoke in the low-voiced but dogged way of somebody forced into breaching decorum. Ted Cruz extorts reactions of that type. He’s one of nature’s extreme phenomena.