An interview with Anthony Bellotti of the White Coat Waste Project. 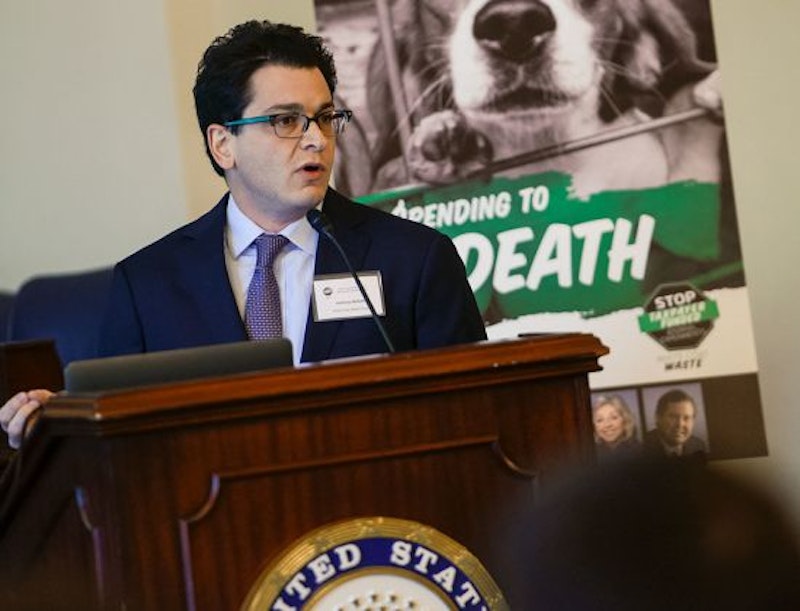 The White Coat Waste Project is an organization that seeks to frame opposition to animal testing as a right-wing issue. Recently the group discovered the United States Department of Agriculture has killed approximately 3000 kittens in toxoplasmosis research. I interviewed the organization's president, Anthony Bellotti, about the group's origin and strategy.

Anthony Bellotti: Prior to founding WCW, I was consulting for center-right candidates and issue campaigns (e.g. Defund Planned Parenthood, Hands-off My Healthcare). I got the idea for a new model to fight $15 billion in taxpayer-funded animal experiments when I read a report called “Summertime Blues” released by Sens. John McCain and Tom Coburn. The two blasted wasteful spending in the Obama stimulus package, including for cocaine addiction tests on primates. I said—hallelujah!—we should have an entire organization just focused on finding, exposing and defunding government animal experiments that are incredibly wasteful and most Americans oppose.

ST: How did the organization come to be?

AB: I worked in an animal testing lab as a teenager and was horrified at what I saw. I knew I wanted to do something about it, but didn’t figure out how until years later. Fast-forward more than a decade to my time in politics. I started doing research and found two trends: more money and more animals than ever were being used in experiments in spite of a historic sea change in public opinion. I realized that many establishment animal groups were already working on animal testing. However, not a single one was exclusively working on cutting taxpayer funding even though that’s the biggest problem since two-thirds of U.S. animal experiments are government-funded. I realized we needed a new model. We needed to reframe an old issue in a new light, like the criminal justice reform movement has done. I founded WCW as part-time, all-volunteer effort funded by myself to get it going. We got our first major funding in the end of 2015 and launched our first public policy campaigns in late 2016. By 2017, more than half of our funding came from Bernie-Sanders-style gifts, thousands of $30 checks.

AB: We don’t weigh in on government funding into alternatives simply because it’s not our mission. There are already plenty of groups who do that. We do what they aren’t doing; advocating for cutting spending that hurts taxpayers and animals, which we think is the most effective way to solve the problem since Uncle Sam is the largest funder of animal tests in the country.

ST: In general, Democrats have much better animal-welfare records than Republicans, according to Humane Society Legislative Fund ratings. Why does White Coat Waste Project expend its energy trying to win over Republicans, when it could work to elect more Democrats?

AB: These other establishment groups with scorecards are animal welfare and animal rights groups with very diverse agendas and rate lawmakers on all manner of issues. Were not an animal welfare or animal rights group. We’re a single-issue taxpayer watchdog group focused on government-funded animal experiments. So, ratings on establishment animal welfare scorecards aren’t relevant for our mission. Wasteful government spending is the single largest cause of animal testing in the U.S., but it’s a neglected issue on establishment scorecards. We work with anyone—Republican, Independent, Democrat or otherwise—who wants to help clean up wasteful government spending that harms animals. If you look at who’s leading the charge on efforts with WCW to curb taxpayer-funded animal experiments, it's all bipartisan, but also Republican-led. Last year, for instance, 11 of 15 of WCW’s 'Congressional Waste Warrior' awardees were Republicans. There’s also no group expending energy into winning over center-right, GOP and libertarian audiences. We don’t need yet another Democrat-only approach. The only way to win on any issue is to bring in new blood and widen the tent.

ST: Do you see a conflict in conservative animal activists like Matthew Scully—author of Dominion: The Power of Man, the Suffering of Animals, and the Call to Mercy—working for anti-animal politicians like Sarah Palin?

AB: The key is to work with everyone who wants to clean up wasteful spending on animal tests. For us, that means working with politicians who get five percent or zero percent on the establishment scorecard. We’ll continue to do that. We don’t subject our supporters or lawmakers to a litmus test. If they oppose taxpayer-funded animal testing, they have a home at WCW.