The first debate isn't much fun for Democrats. 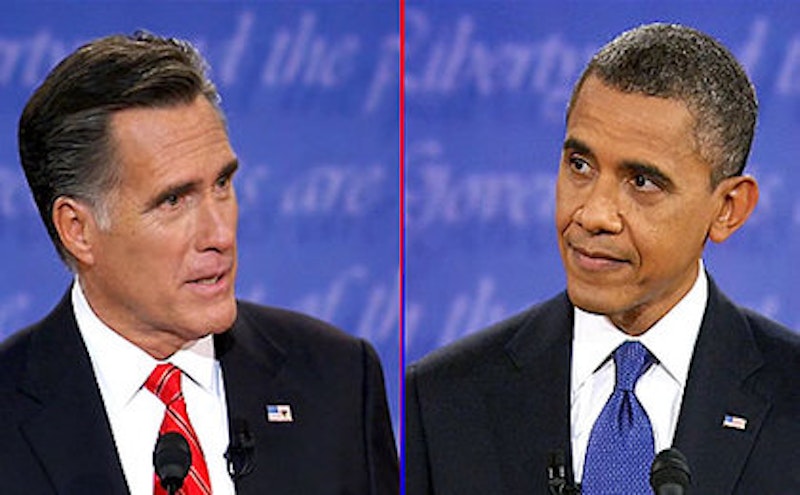 Last night, during the first presidential debate, Mitt Romney raised at least five points that President Obama should have answered but didn't. Romney said there were no tax breaks for off-shoring jobs; Obama didn't touch that. Romney faulted the Dodd-Frank Act for giving too-big-to-fail status to five banks, and he said it left mortgage lending in limbo because the law didn't specify exactly what a “qualified mortgage” is. Obama had nothing to say. Romney said Obamacare violated the Constitution (“whisked away the 10th Amendment”). Obama was quiet again, and there he had the Supreme Court to back him up. And Romney mentioned demurely that some of the companies getting green-jobs tax breaks from Obama “happened to be owned by people who were contributors to your campaigns.” Nothing from Obama on that.

It was a frustrating 90 minutes. For a partisan, this debate was the inverse of Bill Clinton's moment at the Democratic convention. Instead of seeing every point you care about being converted into the nation's common sense, you see the president taking notes and bunching his mouth, and then coming out with boilerplate. Looking over the transcript, it's a surprise to see where he did answer Romney on something. No, the Obamacare board can't decide what treatments people are able to get—the damn law says the board can't decide that. Of course, Romney had made the claim three times before it occurred to Obama to say something.

A CBS insta-poll says 46 percent of viewers thought Romney came off better in the debate, as against 22 percent for Obama. Andrew Sullivan live-blogged himself into despair. After 29 minutes, he had broken out the italics: “Here's what Obama is missing: energy, optimism, passion.” Somebody like me, somebody with a superstitious faith in Romney's gift for weirding people out, must grit his teeth and brace for tight curves. Yes, the Romney Factor will see us through in the end, but only in the end. For now we must accept that the first round is his. He didn't even appear that jittery. All right, he and his hands seemed to be dodging each other as he tried to illustrate varying tax levels. His voice sometimes took on that hollowed-out, unsettling lightness that makes it sound like it's about to tear. But, mostly, no problem. He sounded like a man talking, as opposed to his usual public self, which is a man trapped into expelling breath from his lungs in a sequence determined by inscrutable, exigent forces who will never explain their reasons to him. In other words, he may not have seemed presidential, but he was a functioning human with something to say about how good the middle class is and how bad taxes are.

Meanwhile, Obama droned. He has a beautiful smile, though. The press was saying he had to guard against smirking or pulling faces if Romney brought it to him. Romney did bring it to him, or some of it, and the president did not bristle. Instead there was that smile. If Obama wins (my God, “if”—what a difference a day makes), George Will can say the smile was the reason.

Move to the center. Yes, Romney did, to the extent possible. He said that, after all, you need some regulations anyway. He said he was worried about regular families. Possibly, Obama will now try to figure out how he can import material from his attack ads (Bain, the 47 percent) and voice them presidentially and affably while on television. It can be done, but the speaker must be awake while doing it. Obama had some trouble with that last night.

Zingers. Big Bird. You can have your own house and plane, but you can't have your own facts. What else? Not much, I think. Maybe the Romney people said he was memorizing zingers because that way the Obama people would be lulled. They'd say to themselves their foe was doing a typically Romney thing (memorizing zingers!) and would produce typically Romney results. Everybody would be expecting a lot of wooden clunkers, one after the other, and instead there were just two clunkers.

The one about the plane raises a point, or an echo. Clint Eastwood couldn't help bringing up the president's plane when he talked to that chair. Now Romney has done it too. There's something about the combination of Obama and prestigious federal air transport that bugs them.

Historical solace. Walter Mondale knocked Ronald Reagan on his ass during their first ‘84 debate. Michael Dukakis did pretty well against George H.W. Bush in their first. John Kerry did well and George W. Bush let out a big wail (“It's hard!”) during theirs. In each case the loser came back hard for the second debate. In fact, a wised-up operator told me 24 years ago that the underdog always wins the first debate because everybody expects so little of him (or her). The unspoken corollary is that nobody really knows much about what these people are saying or why they should be the ones saying it. We can't tell if Romney, or whoever, is making a good case for being president. All we can tell is whether he's talking and behaving in a manner that is either better or worse than what we expected. That's a powerful corollary, and I have faith in it. But last night I had more faith in the Romney Factor, and I was wrong.