The Coach Who Was Fired For Taking a Knee

Many Americans have a misunderstanding of the separation of church and state. 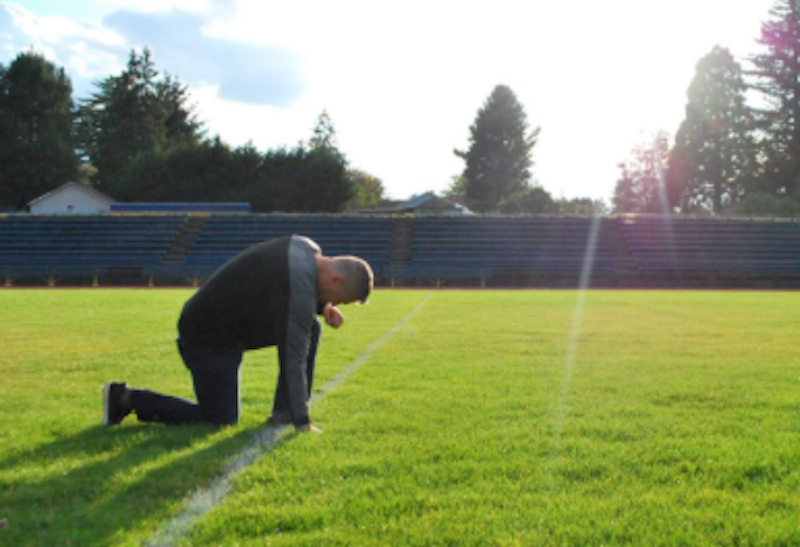 It involves Joe Kennedy, a public high school football coach who was fired in 2015 by Bremerton High School in Washington state. Kennedy wasn’t fired for losing too many games or mistreating players; rather, Kennedy took a knee in prayer after games. Kennedy began this years earlier, and while players/students sometimes joined him, it was on a voluntary basis. Moreover, no one was told or expected to pray the same as Kennedy. Still, someone in the district was concerned that the brief and private prayers might show a government endorsement of religion. As a result, Kennedy was told to stop. He refused and was eventually put on leave.

"This action was necessitated by Kennedy’s refusal to comply with the District’s lawful and constitutionally-required directives that he refrain from engaging in overt, public religious displays on the football field while on duty as a coach,” the school district said in a 2015 statement [Bremerton coach placed on leave for praying on field expected to attend tonight's game (q13fox.com)]. "While the District appreciates Kennedy’s many positive contributions to the BHS football program, and therefore regrets the necessity of this action, Kennedy’s conduct poses a genuine risk that the District will be liable for violating the federal and state constitutional rights of students or others.”

Believing he had a constitutional right to pray, Kennedy continued and was terminated. This shouldn’t happen in America, not even to a government employee. Why? Look no further than 1600 Pennsylvania Avenue. Presidents have long observed the National Day of Prayer and mentioned God in their speeches. Presidents have ended speeches with “God bless the United States of America.” In the case of Joe Biden, he says that and ends with “God bless our troops.” I have no problem with this, and not because I believe in the same God as Coach Kennedy and President Biden. It’s the constitutional right of Coach Kennedy, Biden, and every public/private sector employee to mention God.

Many Americans have a misunderstanding of the separation of church and state. The phrase “wall of separation between church and state” isn’t in the Constitution. It’s also missing from the Declaration of Independence. While it’s true the First Amendment says that “Congress shall make no law respecting an establishment of religion or prohibiting the free exercise thereof,” that’s different from the “church and state separation” that we hear about from organizations seeking freedom from religion. Those organizations say that religious people can’t express their beliefs in public. Anti-religious groups also lead school systems to believe that there are “constitutionally-required directives” that must be followed. That’s not true.

Thomas Jefferson, commonly credited for coining the “separation” phrase (in a letter to pastors and not in a government document), attended church services held on public property. As president, Jefferson allowed public property to be used for religious services.

“The Joe I know is someone who believes in the power of prayer and who turns to God for strength in moments of hardship and joy,” Coons later wrote in an op-ed [Sen. Chris Coons: The Joe Biden that I know is a man of faith  | Fox News] published on FoxNews.com. “I’ve witnessed Joe’s faith in action, and his empathy, prayerfulness, and love have gotten me through some of my toughest moments—including when my own father was in hospice.”

“Like so many Americans, Joe’s faith is a fundamental part of who he is,” Coons continued. “Growing up in a Catholic family in Scranton, Pennsylvania, and Claymont, Delaware, Joe learned from a young age that all people are made in the image of God, and to love his neighbor as himself. As he grew up and began a career in public service, his faith stuck with him in good times and bad—and the issues that he cares about, his empathy for others, and his values are rooted in the Gospel,” said Coons.