The CHAZ Has a History

The 1980s concept of the Temporary Autonomous Zone is playing right now in Seattle. 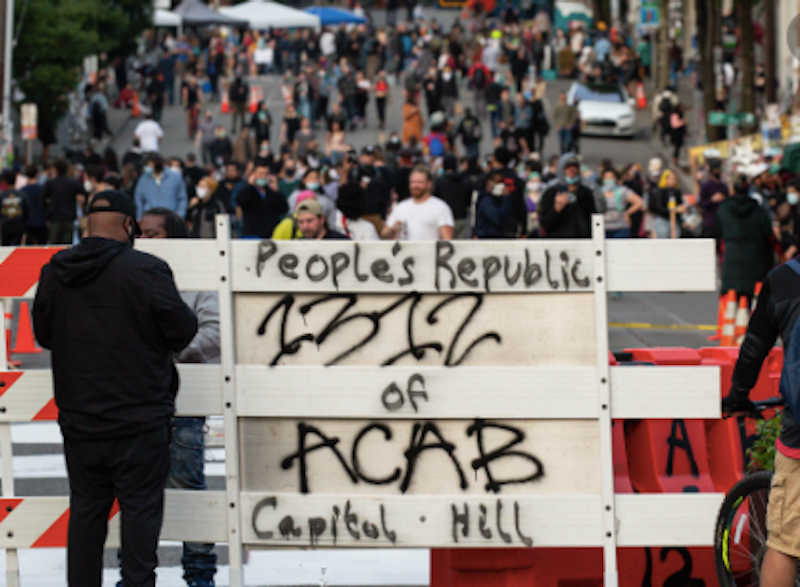 "Let us admit that we have attended parties where for one brief night a republic of gratified desires was attained. Shall we not confess that the politics of that night have more reality and force for us than those of, say, the entire U.S. government?"

I was surprised and pleased to hear that a few blocks of Seattle have been declared an "autonomous zone." The police have been ejected from their station and given way to both a protest and a party. Trump has declared that if Mayor Jenny Durkan can't re-take control of the area, he'll send in the troops. "This is not a game," Trump tweeted. "These ugly Anarchists must be stooped IMMEDIATELY. MOVE FAST!”

But even Trump has to know that invading Seattle would be a political mistake, and I suspect the CHAZ (Capitol Hill Autonomous Zone) will dissipate eventually on its own, or become a periodic political street fair.

The word “anarchist” freaks everyone out even at this late date. It freaks liberals out because if Trump or Fox News can associate them with anarchism or the idea of abolishing the police, Biden will lose the election. Some Black Lives Matters organizers are concerned about the same thing: association with anarchists will discredit their movement. All day on Fox they say “anarchists” and “autonomous zone” in voices dripping with sarcasm. I don't feel it's my job to shepherd Joe Biden to the presidency, even if I could. But as an actual anarchist, I'm happy to see the "autonomous zone" style of anti-politics re-emerge.

The CHAZ arises from the concept of the TAZ, or Temporary Autonomous Zone, the basic idea of a manifesto or essay of that title originally published in 1985 by "Hakim Bey" (Peter Lamborn Wilson), an amazingly problematic and amazingly creative person who's still around, as far as I can tell. Problematic: I think Wilson considers himself a white black Muslim. Also he's been an advocate of "man-boy love." Stepping back from that for a second (if one can), he's also a spectacularly interesting writer and thinker, perhaps the most interesting and useful anarchist theorist between Peter Kropotkin (1842-1921) and David Graeber, the brilliant contemporary anthropologist and economist who is also, I hasten to add, a morally admirable person.

The TAZ concept is a strategy for resistance and societal transformation without an organized or armed revolution. “Hakim Bey” sketches it out in his rollicking text: "We recommend [the TAZ] because it can provide the quality of an uprising without necessarily leading to bloodshed and martyrdom. The TAZ is like an uprising which does not engage directly with the State, a guerilla operation which liberates an area (of land, of time, of imagination) and then dissolves itself to re-form elsewhere/elsewhen, before the state can crush it."

"The TAZ," he adds, "is thus a perfect tactic for an era in which the State is omnipresent and all-powerful and yet simultaneously riddled with cracks and vacancies."

Anarchist political theory declined severely or just halted between the Russian Revolution of 1918 and the Occupy movement of the 2010s (in which Graeber was active) for a number of reasons. Anarchism discredited itself by assassinations (including William McKinley) and terrorist bombings. It appeared to have been historically refuted as completely impractical, while Lenin-style authoritarian communism led to successful revolutions and enduring governments all over the world, making it seem the obviously viable far-left position.

The anarchists, who were a large, worldwide mass movement circa 1910, got a chance to apply their ideas only in relatively small enclaves that were already in the midst of chaos, such as in the Ukraine during the civil wars that broke out after the Russian Revolution and around Barcelona during the Spanish Civil War. In every such case, authoritarian communists or fascists, or at any rate the surrounding statists, killed the experiment in its infancy.

So by the time Bey's pamphlet appeared, anti-statists were a small band of disconsolate idealists, unable to tell anyone how to get there from here. If they were expecting a worldwide revolution that would get rid of all governments, they were merely fantasizing. It was hard to picture a ragtag band of anarchist freaks going up against, for example, "the greatest military the world has ever known," an organization controlling a world-annihilating nuclear arsenal, a vast prison system, and the ability to print money. The anarchists, if you'll pardon my saying so, are right that the state is organized violence, oppression, and inequality. But even they (alright, we) had to admit that the anarchist cause was hopeless.

Hakim Bey took us in another direction. Every un-policed party, he pointed out, was an anarchist paradise (or nightmare, of course). Any place where people managed to evade state or corporate surveillance for a time was a liberated zone. Maybe we already had a little bit of what we wanted, and the idea was to disappear by the time the authorities arrived and re-form in another configuration somewhere else. Maybe these zones could be expanded or joined into another sort of society.

In TAZ and his other writings, Wilson described many sorts of autonomous zones, from the ancient world to the sci-fi future. He wrote a book about "pirate utopias," a network of ports around the world in the 16th and 17th centuries that were not under the control of any government. He was interested in all sorts of religious enclaves, from the Amish to the Rastas to his own obsession, black power religious tendencies such as the Moorish Science Temple. He wrote about medieval Assassins and warehouse raves, hippie communes and abandoned ghettoes.

The map has closed, he says, and pirates and assassins no longer wander so freely. "Not one square inch of earth goes unpoliced or untaxed… in theory." But in fact, as state and corporate power is exercised more and more thoroughly, it keeps producing holes or shadows, interstices in which something else becomes possible, if only for a short time, whether it's in Rojava (which also describes itself as "autonomous zone") or the CHAZ. Even in the 1980s, Wilson/Bey was reading cyber-punk, talking about nets and webs, and thinking about temporary autonomous zones created in cyberspace through encryption. When the CHAZ describes itself as a "no-police zone," they’re getting to the essence of Bey's concept.

TAZ politics is fundamentally aesthetic: what happens at a really good party or in an un-policed crevice of the web or the city can be the creation of a collective work of art: Bey calls it "music as an organizational principle" (a notion we also get in Confucius, for example, or wherever social cohesion is thought of in terms of "harmony"). A piece of music is never still: it develops and it ends. The idea of the TAZ is in some sense the opposite of a utopia: not a static or stable system headed toward perpetuity a la Plato's Republic, but a non-system that's volatile and ephemeral, experimental and aesthetic.

When the TAZ concept came along and captured the imagination of younger anti-authoritarians, more traditional anarchists regarded it as a capitulation, an admission that a revolution and global transformation of society was impossible. They dismissed it with a sneer as "lifestyle anarchism" in which the dreams of a better world had been replaced by tonight's party. On the other hand, non-anarchists, insofar as they ran into the idea at all, asked how in the world this provided an alternative to, let's say, democratic socialism as a practical program. As does Fox News, they dismissed the whole thing as childish.